* The following schedule has been affected by the Covid pandemic restrictions*

By the end of the last week of February, we hold our Spring School and Annual Conference and in the last week of October, we hold our Autumn School and Membership Meeting and a Public Meeting as well. Over and above, in cases of important events, we do have rules about holding Special Party Conference, Special Membership Meeting and Party Vote as necessary.

The Executive Committee meets usually at 5 PM on a pre-decided date of a month.

Every Sunday from 5 PM to 8 PM we sit in our Study Circle and Discussion Meetings. Agenda and subjects cover all theories of knowledge and information which include mainly: historical materialist analyses of the evolution of human life and society, economics, Marxian theories, books and articles written by Marx and Engels and other socialists, Leninism, words and work of leftist parties, reform or revolution, and all various books and journals, organization and activities of our party and the Socialist Party of Great Britain.

All our programmes are open to all. In the Public Meetings too after the completion of the speech by the speaker the listeners are allowed sufficient time to discuss a question/answer session. Why waste time? Contact over the phone, know our whereabouts and come up in any of our events. Persons eager to know us in detail are welcome!

How do you organise a political party without leaders or followers? Come and find out. We’ve been doing just that since our inauguration in March 1995 drawing heritage from the Socialist Party of Great Britain that began in 1904.

Our party’s policies are decided by a secret ballot of all our members following full discussion and debate at our Autumn Membership Meeting and Annual Conference.

In the same way, the members of the Executive Committee and party officers are elected directly by the membership as a whole. Members of party committees are nominated by branches with subsequent appointment by the EC.

In between party conferences, it is the work of the Executive Committee to coordinate the party’s activities in line with decisions made at past conferences and party polls.

In common with other parties of the WSM, the WSP (India) was formed as a revolutionary party opposed to Leninism and seeking to win control of the state by parliamentary means in order to abolish it and establish socialism on a worldwide scale.

Since then the party remains the only World Socialist Party in Asia.

We have no secrets

All of our meetings, without exception, are open to anyone.

Come and see how we are organising for a world of universal ownership and democratic control. A world free from the tyranny of classes, nations, the state, leaders, money, wage and war.

You’ll be most welcome.

Our aim is to build a movement working towards socialism, a democratic society based upon co-operation and production for use, a world community without national borders. An end to buying and selling and money, where goods will be voluntarily produced and services voluntarily supplied to meet people’s needs. People will freely take the things they need.

The World Socialist Party (India) is an organisation of equals with no leaders.

“The philosophers have only interpreted the world, in various ways, the point, however, is to change it.” – Marx

● Change the world with Socialism!

● Wage-slavery or starvation death – these are not alternatives, but two-pronged terrorism!

● Socialism needs you – you need Socialism; recognise Socialism – vote only for Socialism!

● Elect mandated MPs for Socialism only!

● Inscribe on the banner: “the annulation of all property and territorial rights; all that is on and in the Earth becomes the common heritage of the whole human race”.

● Join us to develop the independent leader-free democratic organisation of the working class!

● Religion and socialism exclude each other.

● Take the road of cooperation for life to end competition for a living!

● Workers have no country; you have nothing to lose but your chains; you have a world to win; workers of the world unite!

NO REFORMATION ÷ NO PROMISES ÷ NO RELIGION ÷ NO LEADERSHIP

SELF-EMANCIPATION OF OUR CLASS

In a peaceful and democratic way,

By applying our power of knowledge and number

Via ballot in elections,

That is the end of poverty, famine, environmental destruction, war and terrorism; and the beginning of peace, freedom and participatory democracy:

The only practical alternative awaits recognition.

Socialism needs you – And you need Socialism.

Recognise Socialism – Vote only for Socialism. 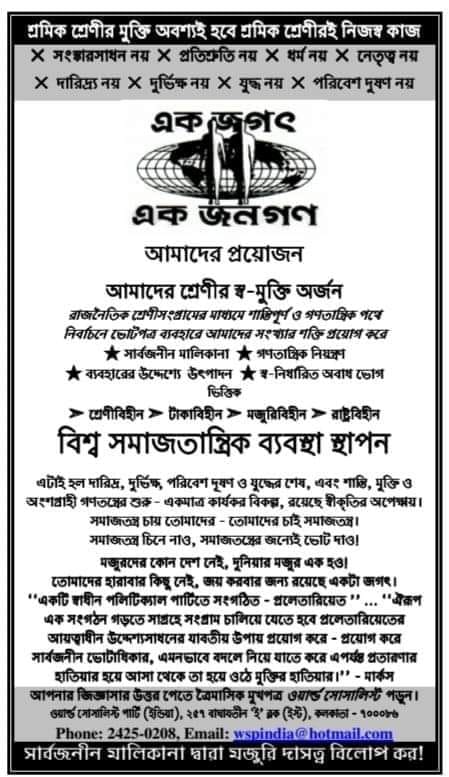 Journal of the SPC

With several articles in French-Canadian

Socialism Or Your Money Back