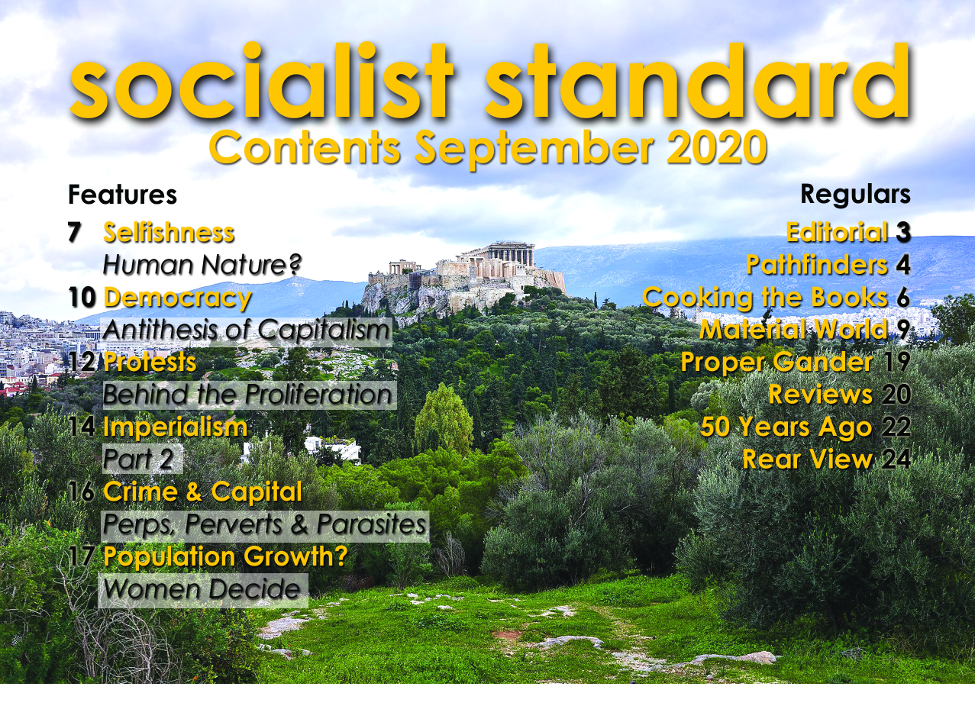 The Socialist Party advocates a society where production is freed from the artificial constraints of profit and organised for the benefit of all on the basis of material abundance. It does not have policies to ameliorate aspects of the existing social system. It is opposed to all war.

The Socialist Standard is the combative monthly journal of the Socialist Party, published without interruption since 1904. In the 1930s the Socialist Standard explained why capitalism would not collapse of its own accord, in response to widespread claims to the contrary, and continues to hold this view in face of the notion’s recent popularity. Beveridge’s welfare measures of the 1940s were viewed as a reorganisation of poverty and a necessary ‘expense’ of production, and Keynesian policies designed to overcome slumps an illusion. Today, the journal exposes as false the view that banks create money out of thin air, and explains why actions to prevent the depredation of the natural world can have limited effect and run counter to the nature of capitalism itself.

Gradualist reformers like the Labour Party believed that capitalism could be transformed through a series of social measures, but have merely become routine managers of the system. The Bolsheviks had to be content with  developing Russian capitalism under a one-party dictatorship. Both failures have given socialism a quite different — and unattractive — meaning: state ownership and control. As the Socialist Standard pointed out before both courses were followed, the results would more properly be called state capitalism.

The Socialist Party and the World Socialist Movement affirm that capitalism is incapable of meaningful change in the interests of the majority; that the basis of exploitation is the wages/money system.

The Socialist Standard is proud to have kept alive the original idea of what socialism is — a classless, stateless, wageless, moneyless society or, defined positively, a democracy in which free and equal men and women co-operate to produce the things they need to live and enjoy life, to which they have free access in accordance with the principle ‘from each according to their abilities, to each according to their needs.’