The High Street was already on the financial skids before the pandemic, which has sped up 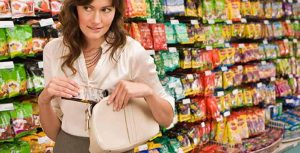 the shift to online shopping. And these days, going to the shops has the added considerations of facemasks, social distancing, arrows on the floor and sanitisers by the doors, making it more of an ordeal than before. Despite all this, slick, brightly-lit shopping malls are still there to tempt those looking for either retail therapy or a five-finger discount. The latter were the focus of Channel 5’s recent Shoplifters: At War With The Law. This fly-on-the-wall documentary series follows the security guards and their quarries at two interchangeable shopping centres: West Orchards in Coventry and Weston Favell in Northampton. It was filmed pre-Covid 19, so since the cameras left, the guards are presumably on the hunt for people not wearing masks as well as people not paying.

According to the programme’s voiceover, last year, there were 400,000 shoplifting incidents reported nationwide, with the number of those that go undetected estimated to be 20 times higher. Of course, we don’t see any of these, and the shopping centres understandably want the programme to emphasise the chances of getting nabbed. Regardless of this, the show has plenty of tips for would-be pilferers, such as going with a group of friends to distract the guards while items are slipped into pockets elsewhere. And higher-end goods with electronic tags attached can be dealt with by snipping them off with pliers or hiding them in a bag lined with foil so they don’t set off the door alarms.

Watching out for all this are hundreds of HD CCTV cameras, whose footage is relayed back to each shopping centre’s control room. When the guard on duty there sees someone acting shiftily or gets a tip-off from one of the shops, they can radio down to their colleagues to find their target. It’s all quite sad to watch this game of cat-and-mouse, although a couple of the guards get a kick out of their work. ‘I always catch my prey,’ boasts one, ‘that’s why I do my job. I love it’. The guards can only apprehend someone once they’ve left a store, although they cynically assume ‘anybody that’s in the shop is a shoplifter until they go to the till’. Those who are caught are led to a bleak holding room to be questioned and have their bags searched. The police will be called if the person has ‘gone equipped’ with a foil-lined bag or pliers, or if what they have stolen is valued at over £200. If the goods are worth less than this the police won’t usually be involved and instead, a year-long ban from the shopping centre is issued. If the accused says they have no ID, they’re asked to bring up their social media profile instead. Their name, address and date of birth are taken, as is a mug shot for the database. If they are seen to return to the centre, they will be trespassing and the police will be called. The guards have had plenty of practice with the procedure: the West Orchards team ‘take down’ up to ten shoplifters a day, as they put it.

The programme-makers blur out the faces of the people caught, which also has the effect of emphasising how dehumanising the need to shoplift is, and the rituals around it. Some of the people featured have been recruited by gangs, and probably have very little choice in the matter. They tend to be from Eastern Europe, not able to claim benefits and without much chance of securing better paid work, which makes them vulnerable to exploitation from organised gangs. Most of the value of any successfully shoplifted goods is likely to go to the gangmasters, with those who take the risks receiving little back; a more extreme version of mainstream employment. These gangs tend to move between areas once they become too well-known in one place. Nearly three quarters of shoplifting in West Orchards is carried out by a small group of local repeat visitors. Many of these are homeless, with or without a benefit claim, either stealing to get enough food or to fund a drug habit. One man speaks to the camera crew after he’s thrown out for the umpteenth time: ‘I’ve got nothing. I ain’t got no-one. But … I’ve got the shops.’ The guards tend to treat those who are pushed into shoplifting by poverty with some sensitivity, as long as they don’t get lairy.

But Shoplifters: At War With The Law doesn’t want us to feel too sympathetic towards people who steal. Its voiceover makes the point that shoplifting ‘takes more than £2 million out of tills every day’, and that to make up for these losses shops have been ‘ramping up prices for millions of honest shoppers’. It’s easy to claim that theft raises prices, but this falsely implies that retailers would lower prices below the market rate if people stopped stealing, which of course no retailer would ever do, so it just scapegoats people who shoplift and provides an alibi for inflated prices. The costs of security measures and stolen items do impact on the profitability of goods to some extent, so the chain store owners will be keen to clamp down on shoplifting. But a few pinched bottles of perfume or boxes of chocolates are nothing compared to the billions of pounds creamed off by owners and shareholders.