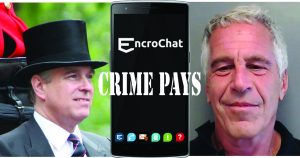 At the beginning of July, it was loudly trumpeted in the media that hundreds of people had been arrested in operations across Europe. It was a directed strike at organised crime groups, enabled by French police compromising the communication servers of a company called Enchrochat, which offered secure encrypted communications. Believing themselves safe from police surveillance the criminal entrepreneurs using its services were caught planning drugs deals, kidnappings and murders.

The enterprises engaged in drug production on an industrial scale. Police uncovered ‘19 meth labs, 1,200kg of meth and 10 tons of cocaine’  (tinyurl.com/yxhxu58k). This industrialism is complemented by the horrifying fact that Dutch police found a shipping container that had been converted into a soundproofed torture chamber, complete with a chair to strap victims into.

Enchrochat charged £1,500 for a 6 month contract with its dedicated handsets, and it’s believed that 10,000 people in the UK availed themselves of its possibilities, out of 60,000 worldwide (tinyurl.com/yck7u5h5). The law enforcement agencies consider that this was a bespoke service for criminal enterprises, used by middle tiers and upwards of organised criminals. So this set of police raids, which have netted 800 arrests (so far) has also revealed the extent of organised crime.

Although those numbers sound large on their own, what they reveal is how small the organised criminal underworld really is, and how efficient their business is for so small a number to cause so much pain and mayhem. Just as with most other enterprises, modern industrial technology has increased the productivity of those whose output is crime.

The raids in the UK amounted to over 700 arrests, netting £54 million in cash. This is, though, not the full value of these businesses.

These are early days, and the state agencies have a vested interest in saying everyone who used these machines was a criminal (as opposed to legitimate business people with a need for privacy). What these events show, though, is the professionalisation of crime. Indeed, the root cause of crime is free enterprise, and entrepreneurs would be foolish not to make the best use of available technology to spread their businesses. They co-operate across borders with business partners (the press called them ‘gangs’) in other countries.

Like any other business, they need to co-ordinate their activities, and although this co-ordination remains hidden most of the time, this communication was used in this case to smash their organisations. They also need secrecy, lest their competitors take their markets from them (their competitors including capitalist businesses that are ‘legitimate’ and use the law to make their money rather than breaking it). Like the criminals, the police advanced their use of technology. As Joseph Cox (also at Vice) explained, there was:

‘…malware on the Encrochat device itself, meaning that it could potentially read the messages written and stored on the device before they were encrypted and sent over the internet’ ( tinyurl.com/ycq2r46j).

Enchrochat themselves boasted that nothing was stored on their servers, and that their phones had an easy wipe feature. The malware prevented wiping and stored passwords.

The loss of Enchrochat has temporarily broken the bond of trust needed to engage in this type of business, but new encryption services are coming forward, and the criminal enterprises will learn and return to their pursuit of wealth and profit without restraint at the first opportunity. After all, isn’t that what capitalist ideologues tell us all to do: fill your boots?

Pandering to the wealthy

Similarly, a criminal enterprise broken apart by state action is Jeffrey Epstein and his associates. His ‘little black book’ of contacts has been released and while, it should be stressed, there is no reason to think any of the names listed in it are connected with his sex crimes, it is an interesting insight into the connectedness of the rich and powerful ( tinyurl.com/y6mfzsbl). Just as criminal gangs organise in international networks, so too do supposedly legitimate businesses.

Jeffrey Epstein famously committed suicide in prison (under murky circumstances that led many to claim he was ‘suicided’). He was convicted of sex trafficking, as his Wikipedia article relates:

‘Epstein pleaded guilty and was convicted in 2008 by a Florida state court of procuring an underage girl for prostitution and of soliciting a prostitute. He served almost 13 months in custody, but with extensive work release. He was convicted of only these two crimes as part of a controversial plea deal; federal officials had identified 36 girls, some as young as 14 years old, whom Epstein had allegedly sexually abused’ ( tinyurl.com/yypd37bt).

His initially lenient sentence after the plea deal was attributed by many to his having influential friends.

He was a wealthy financier from a modest background. He gained wealth in the ‘80s as a Wall Street trader. Steven Hoffenberg, who served 20 years in federal prison, claims Epstein was a co-conspirator in his fraud, and yet he was not charged. He moved in to managing the investments of the truly wealthy.

He used his wealth to pander to other wealthy and powerful men. It is interesting to see who was willing to be a recipient of his largess, flying on his private jet – rather tastelessly nicknamed ‘the Lolita Express’ (apparently because of the number of teenage girls it flew to his private island). The list of those who flew on the jet included Bill Clinton, Donald Trump and Andrew, Duke of York. Epstein’s contact list included Prime Ministers like Tony Blair (of course, this just means he knew their contact details, not that they had been in contact).

At his death, he possessed $112 million in investments, $56 million in cash and was worth an estimated total of $577 million, including his Caribbean private islands. As a fund manager he made his wealth looking after billions of dollars of other people’s money. To that end, his luxurious lifestyle was part of his means of impressing clients and potential investment partners.

That lifestyle included using his wealth to obtain and sexually abuse young women and girls. While still alive he settled a string of lawsuits with pay-offs. There are allegations he provided girls to his contacts (tinyurl.com/y547oqnw663245788 ). More will come out, doubtless, in the upcoming trials of his associates.

Like the Enchrochat criminals, wealth and respectability came to him from the proceeds of criminality. Like the, state intervention shows how the powerful and wealthy organise and connect to each other. The wealth stolen from our labour funds these lavish lifestyles. For the truly wealthy, the law becomes optional, and it took particularly egregious behaviour from Epstein to even get a slap on the wrist.

The connection between his world and the Dutch torturers is wealth and ego turning into impunity: wealth, secrecy and power go hand in hand which in turn enables criminality. Billionaires do not need a lift on a friend’s jet, but they like the flattery and affirmation.