What do protests signify and why so many? 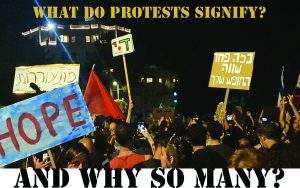 Just what is wrong with the world today, so wrong that there are huge numbers of protests in numerous countries with millions of people crying out for change? Some of these protests get much publicity, others in different parts of the world are rarely heard of except locally. A brief search on the internet for protests will supply reams of information from countries many people from the West will not be able to point to on a map, let alone be aware of the protest and its purpose – but they are there in great numbers and appear to be growing annually.

Different generations may have different perspectives as to the significance of any particular protest but as each generation grows older they can look back and possibly/probably have a different view from those of younger generations who are viewing the same events but as historical events. If we recall the early days of CND (Campaign for Nuclear Disarmament) and the ‘Ban The Bomb’ banners, initially started by Bertrand Russell all those decades ago with the aim of stopping development of nuclear weapons and protecting the planet and humanity, and then we give serious thought to the years in between then and now, what do we find? In those six to seven decades research and development of such weapons has continued and a significant number of countries, including the UK, continue to produce and sell them at great profit. The humble atomic bomb of 1945 has now become a bomb of the past, superseded by incendiaries of much greater capacity. Since then waste nuclear materials have become a favoured product for use in depleted uranium weapons as used in Iraq for example.

Following on from the initial CND campaign, which clearly hasn’t seen success yet, came more generalised protests such as the Greenham Common women’s attempts to bring ongoing attention to the US Airforce base from where nuclear weapons were being deployed.

Year on year since the first atom bombs were dropped by the United States on those two towns in Japan, more countries of the world either developed or simply bought those weapons from countries willing to sell them for great profits.

And where are we now? How has protest affected the decisions of those in power to pay attention to calls for abolishing nuclear weapons? Some talks to limit the kind and size and numbers – talks but no action to speak of.

Around six decades ago there were strong warnings regarding the coming problems for the globe connected to human-made global warming. At that time the emphasis of growing movements and writers was on the rape and pillage of the worldwide environment and the urgent need to protect the planet for future generations. The result? A year on year increase of emissions, increased degradation of forests, over use of water leading to the increased disappearance of aquifers and huge increases in the number of migrants having no choice but to move away from such diversitiesadversities as drought, gradual inundation and loss of land for basic food stuffs.

Recently we have witnessed the Extinction Rebellion and global protests with the expected kick-back from media entrenched with the status quo. This topic now seems to be taken more seriously by many more individuals as time slips by but the action required against it is not being taken. Warning after warning is signalled telling of the enormity of the problem and still production for profit continues regardless whilst continuing to ignore the degradation of the planetary environment and the plight of climate refugees.

Surely no one now can be totally unaware of the history of slavery and the following knock-on effects continuously displayed and currently witnessed in the Black Lives Matter protest movement. Whilst the previous two paragraphs related to all life on Earth this topic reveals the division specifically between black and white individuals as a result of the despicable history of European colonialism. The evidence is clear that the legacy of colonialism of one form or another has left indigenous and black and brown people in positions of severe inequality. Both the US and UK’s statistics reveal inequalities in employment – from the securing of a job interview to rate of pay, education, housing, stop and search by police and especially imprisonment where numbers by percentage of population are highly disproportionate.

This protest has been alive for generations. Now we continue to witness an ongoing series of horrific deaths – murders(?) – of black individuals who happen to be in the wrong place at the wrong time. Of course there will be protests. Such an urgent matter does need to be addressed but this isn’t what is happening.

Why are there protests?

It becomes more apparent as time goes by that huge sections of the global population are standing up and shouting because they want to be seen and heard calling for action different from what their leaders are offering. Democracy, so-called, as it is displayed around the world is obviously not democratic enough for many. Voting for a candidate once every four or five years, for example, and then hoping that something will be achieved eventually is surely not how most would want it. They know their voice is not heard and is not likely to be heard or acted upon.

In one way or another all these various voices of protest seek to improve human society. Let’s assume that at some point one or more of the objectives are resolved to the general satisfaction of the protest’s supporters. Will those supporters be satisfied or will they then discover another problem to be solved? Recognising that any move in the direction of satisfying the protesters is likely to be insignificant, how long are supporters, or even generations of supporters, prepared to continue with their fight against what they consider to be wrong? Many protest movements have evolved over the years and are still unresolved. Some will be prepared to compromise and accept crumbs from the table leaving future protesters to attempt to take the protest further.

Reformism seems to have become acceptable to many as a way to achieve a particular end step by step but consider the track record of another attempt to improve things within the system, trade unions, a collective of workers pressing for improved conditions, better pay and other concessions from employers. Some will look back at the headier days some decades ago but the reality is that there are fewer union members year by year as new rules and regulations from governments are applied plus the downgrading of the general work force following massive offshoring of manufacturing. The bottom line is profit for employers and companies, not improved conditions for workers.

It should be noted that one of the issues referred to above, that of global warming, has suffered for years now from the added effects of reformism. Recall the long list of COP meetings (Conference of the Parties) established in 1985 supposedly in order to address the pending global climate problem. So many agreements to no avail, so much negative influence from corporations, so many more emissions, including those from the thousands of people attending from all parts of the planet, as delegates, media, protesters – and every meeting registering more annual negative effects.

Current systems of ‘democracy’ around the world are seen by many citizens as worthless and lacking in what’s required of a true democracy, thus leading to increasing numbers of protests annually. All of what we can refer to as ‘single issues’ have relevance to any debate, however in isolation they face the power of the opposition, that is the power of the wealthy, the corporations, the capitalists and our elected representatives in hock to the capitalists. Many things are not allowed to change because that would affect ongoing profits. The capitalist system is far from democratic and must be overcome. Rather than be divided by all such single issues what is required is that as members of a global population we recognise that all of these issues are just parts of the whole, all should be gathered together under the umbrella of a true and inclusive democracy.