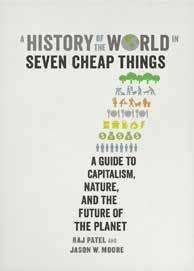 By Raj Patel and Jason W. Moore: A History of the World in Seven Cheap Things: a Guide to Capitalism, Nature, and the Future of the Planet. Verso £9.99.

The seven cheap things are nature, money, work, care, food, energy and lives. ‘Cheap’does not just mean low-cost, it is a strategy that provides as little compensation as possible in return for transforming production. This is part of the Capitalocene, a term the authors prefer to Anthropocene and which emphasises the way capitalism has changed the relations between humans and the rest of nature.

Each chapter provides a rapid run-through of various aspects of history. For instance, the chapter on cheap nature observes that indigenous people, in the Americas and elsewhere, were often regarded as part of nature and so should be enslaved, ruled and exploited by Europeans. In the seventeenth century, the productivity of labour in English agriculture grew massively, and far more

people came to work outside farming; as part of cheap food, they were fed by grain imports from the US. Even a century ago, food made up a far greater proportion of average household expenditure than today. Rural people, as in Ireland and Peru in the sixteenth century, were often forced to move to towns and villages.

Cheap work involved far more than low wages. The spoils of war often involved slaves, including women for sexual purposes, and capitalism imposed longer working hours than people in earlier forms of society had been used to. There was cheap care too: the important work of caring for others was seen as appropriate for women. In the US much caring work is performed by low-paid immigrant workers, and it was recently reported that 4.5 million people in the UK have been forced under coronavirus to become unpaid carers.

Cheap energy resulted in a big reduction in the cost of producing iron, leading to cheap tools and machines. The sixteenth century saw a transition to large-scale coal mining in England and peat-digging in the Netherlands. Despite environmental objections, burning coal to power sugar refineries was legalised in Amsterdam over a century later, as coal was cheaper than peat. Controlling energy costs was one way of sustaining cheap work. Currently a switch to solar power would require a massive investment, and capitalists prefer to rely on cheap oil.

Cheap lives included racist characterisations of some humans (see above on cheap nature). More broadly, force and ideology combined to maintain cheap labour, cheap care, and so on. For instance, in 1575 Francis Drake participated in the murder of every inhabitant of an Irish island before acquiring greater wealth in the Americas and a knighthood. The nation-state became a technology of social control.

Patel and Moore’s book contains a great deal more, which we can’t cover here. The conclusion, though claiming to be revolutionary, discusses the idea of ‘meaningful, pleasurable work’ without saying much about what would be needed to realise such a ‘reparation ecology’. 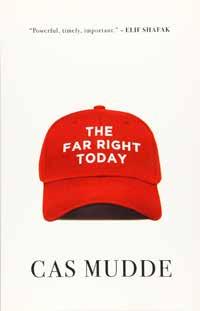 The term ‘far right’ as used here refers to organisations which accept that inequalities between people are natural and positive. It covers both the extreme right (which includes fascism and rejects democracy) and the more numerous radical right (which is mostly populist and opposes liberal democracy, which in turn involves rule of law and respect for minority rights). In the EU, the far right has gained support in recent decades, from around one percent of the vote in the 1980s to seven percent in the 2010s. As Mudde says, they are ‘here to stay’. The radical right, in particular, is more or less part of mainstream politics. An example of an extreme right political party would be Golden Dawn in Greece, while the Austrian Freedom Party (FPÖ) would be radical right.

The book deals with a lot of parties and other organisations, in many European countries but also the US, Brazil and India. Thus it is on the whole more of a helicopter tour, though a useful and informative one, than a detailed look at specific movements or individuals. While there are plenty of differences among them, many views common to the far right can be identified.

They are nativist, combining nationalism and xenophobia, and often advocate ethnocracy (where citizenship is based on ethnicity). They are authoritarian, wanting law and order, a strictly-ordered society where infringements are severely punished, though they are themselves quite often violent. Immigration and the ‘refugee crisis’ (Mudde’s quotation marks) are central issues, with so-called security of nation or race seen as vital and as having a cultural component. They advocate familialism, with the traditional family seen as the foundation of the nation and – yet more jargon! – femonationalism (‘the use of women and women’s rights in support of nativism, in particular Islamophobia’). Their support for the family implies opposition to abortion, but they are increasingly tolerant of homosexuality.

One issue about populism is that its supporters claim to oppose an elite, the definition of which is not usually clear. Mudde states that mainstream politicians are viewed by the far right as a corrupt elite who steal from ‘the people’. He says also that much academic research shows that voters for the far right are motivated less by economic anxiety than by ‘cultural backlash’, which refers to mass immigration and the supposed rise of a multicultural society. So it seems in fact that little support for the far right is based on the existence of inequality or resentment at the power of the one percent.

Mudde describes the radical right as reformist but the extreme right as revolutionary, though without explaining or justifying this latter label. His final conclusion is that the response to the far right should be the strengthening of liberal democracy. Instead, it would be better to argue for a truly democratic classless society. 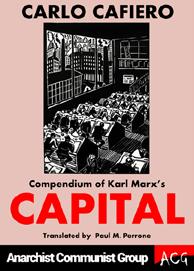 Marx’s Capital, first published in German in 1867, is a tome of over 1,000 pages and so not an easy read. As a result, ever since the working-class movement took off in the 1870s its content has been popularised in shorter works. This is an Italian one from 1879. It is accurate enough with long passages from Capital, though Cafiero’s conclusion expresses a rather romantic view of ‘revolution’.

Cafiero was a member of the International Working Men’s Association and met and corresponded with Marx and Engels but who in the end sided with Bakunin when the split came and became a populariser for ‘anarchism communism’, i.e of those anarchists who stood for a society where the means of life were owned in common and the principle of ‘from each according to their abilities, to each according to their needs’ applied (as opposed to ‘to each according to their work’ as favoured by other anarchists). His pamphlet Anarchism and Communism (tinyurl.com/y2ubu7ck) puts the case for this (which we call socialism) rather well.

Despite opposing Marx politically, Cafiero accepted Marxian economics, and later anarchists translated his pamphlet into French and Spanish, a tacit recognition that anarchist attempts to develop an alternative analysis of the capitalist economy (as fellow anarchist-communist Kropotkin attempted) had failed. In their introduction the ACG go so far as to describe Capital as ‘a superb contribution to our revolutionary understanding’ and to recommend it to anyone who wants ‘to understand how the system works in order to fight and ultimately destroy it.’ We don’t disagree of course but it must cause raised eyebrows amongst some anarchists. 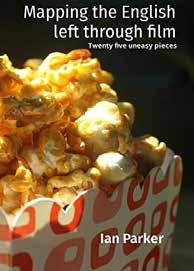 A Rocky Horror Show for the Left

Older readers may remember an amusing pamphlet from the 1980s called As Soon as This Pub Closes . . . which was a wry (and largely accurate) commentary about the main groups on the British far left. This short book from Trotskyist Ian Parker attempts to do a similar thing, but with the twist that the various groups and parties are deconstructed in relation to a film that is claimed encapsulates their methods and objectives.

In fairness it’s a neat idea, but it’s difficult not to come to the conclusion that it might have been better done by someone else – someone who can a) write well and b) who has rather fewer axes to grind. It is subtitled ‘25 uneasy pieces’ and this is a more rounded and accurate description than perhaps the author intended. The sloppy production hasn’t helped matters either.

There seems to be a sneaking admiration for the Trotskyist-Feminists of Revolutionary Socialism in the 21st Century (RS21) but all others get short shrift, including naturally enough, ourselves in the SPGB, ideologically ‘mapped’ through the film Lars and the Real Girl (2007). The discussion of the SPGB seems largely to have been adapted from points made from our entry in Wikipedia, and claims we have a particular vision of socialism that we cling to like a doll.

It also claims we have a ‘dwindling membership’. It’s difficult to see where this comes from (perhaps it’s just wishful thinking) but nevertheless the 25 chapters are said to be ordered in sequence according to the author’s personal perceptions of the organisational size and influence of the parties and groups concerned. This sort of approach is always asking for trouble. Indeed, it’s not clear why on that basis Socialist Appeal appear several chapters before the Socialist Party of England and Wales (SPEW), as the latter – effectively the parent organisation – is obviously several times the size and prominence of the former, whatever else we might think of them.

The SPGB is once again derided as the ‘Small Party of Good Boys’ (yes, the book is that funny) and, while you’d never know from this text, is actually larger than all the left-of-Labour groups listed aside from the SWP, SPEW and CPB. So the fact we appear in the ‘running order’ behind the likes of Workers Power, the RCG and the somewhat mysterious Plan C probably says rather more about the author than it does about us. In particular, the obsession Trotskyists everywhere seem to have with leadership cults, would-be leaders and manipulators of the masses.

Talking of which, it is also telling that while the small band of relentless media whores from Spiked achieve prominence (presumably because of their regular appearances on the Sky News paper reviews defending whatever contrarian ideas are in vogue this week) there is no mention anywhere of the recent significant interest in Fully Automated Luxury Communism. But then again FALC is without doubt nearer to the SPGB’s view of socialism than anything else presented here, and that would be to open up a veritable Pandora’s Box (1929) for the latter-day followers of old Leon.