Proper Gander – the richest and poorest

Channel 5 doesn’t draw much attention to itself, but it occasionally reminds us that it’s there by showing something memorable, such as How The Other Half Live. This two-part documentary is presented by actor Brian Cox, currently most known for playing ‘churlish billionaire’ Logan Roy in the American comedy-drama series Succession. His acting career was an escape from his early years growing up in a struggling family of shopkeepers in 1950s Dundee. He found opportunities among the bright lights of London and 30 years ago relocated to America. He says that his work is lucrative enough for him to be ‘comfortable’, denies being one of the rich and says that money is his ‘own personal demon’ because of the difficulties of his upbringing. 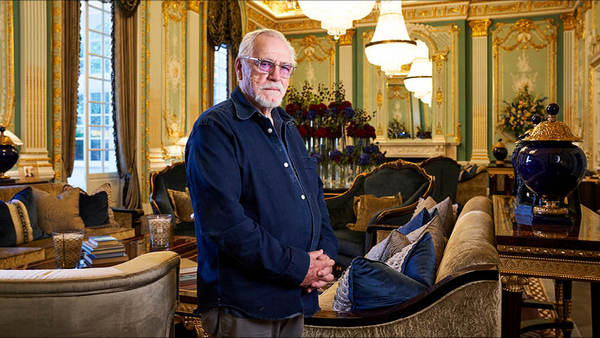 So, ‘Brian goes on a personal quest as he explores our relationship with money and wealth’, as Channel 5’s website puts it. He talks with people about how their lives are shaped by the amount they have, while infographics pop up to give some wider context.

Cox meets a model and social media influencer who gets paid for her posts about fashion and her lifestyle by companies whose products she promotes to her 4.5 million Instagram followers. When asked whether she’s encouraging her fans to spend money they don’t have she replies ‘I am motivating people to work on themselves to afford that things [sic]’. In Miami, Cox visits a property developer who has made millions in commission for selling high-end apartments. New developments of luxury dwellings are shunting out people who would never be able to afford to live in them. Cox talks with Elsa who is facing eviction after the downmarket apartment block she lives in was sold to developers to be knocked down and replaced. Most of those being pushed towards homelessness by this kind of gentrification are low-paid people from immigrant backgrounds.

Another area where poverty disproportionately affects non-white people is Harlem, where homelessness is almost as prevalent as during the depression of the 1930s. New York is a magnet for homeless people as it provides ‘the illusion of care’, being the only state which has a ‘right’ to shelter enshrined in law. But for many, this ‘right’ is only to a space in a grim dormitory where people get stuck for years. The CEOs of these shelters receive an income which those living in them will never get close to. Data from the Institute of Policy Studies is quoted saying that for every dollar an average worker makes, a CEO receives 600, with Amazon’s head raking in 6,474 times as much as someone on an average wage.

The ‘American dream’ says that if you’re poor it’s because you haven’t tried hard enough in the land of opportunity. Those who are born into wealth don’t have to try hard, such as Sam Logan, whose family’s fortune clocks up at 8.5 billion dollars. It’s not clear why he agreed to be interviewed on the programme, as he doesn’t like to talk about growing up being able to have whatever he likes. More vocal is Chris Smalls, who found that hard work doesn’t lead to living the dream. After he led a protest about unsafe working conditions and low pay at Amazon’s Staten Island warehouse he was fired from his job and went on to form an activist group of workers and later a union. Amazon refuses to recognise the union and Smalls quotes reports that the company has spent 4.3 million dollars trying to restrict its influence, which he suspects is an underestimate

Returning to the area where he grew up, Cox visits a community larder near Dundee, a charity which sells stock donated from supermarkets which has gone past its best-before date. This service is the only way which the two hundred people who go there each week can afford enough food. The larder charges a small fee so that the people who use it don’t feel ashamed at getting handouts, which somehow makes the situation even more tragic.

Predictably, what How The Other Half Live lacks is any decent proposed solutions to the problems highlighted. A ‘fair wealth tax’ is supported by none other than John Caudwell, the 115th richest person in the UK (and who arrives by helicopter), and he perhaps says this while knowing it can never happen. But apart from that Cox only comes up with the vague directive to ‘stop loading the dice in favour of the rich and find a sense of unified purpose’. He says this right at the end of the programme, although it would have been a more interesting starting point.