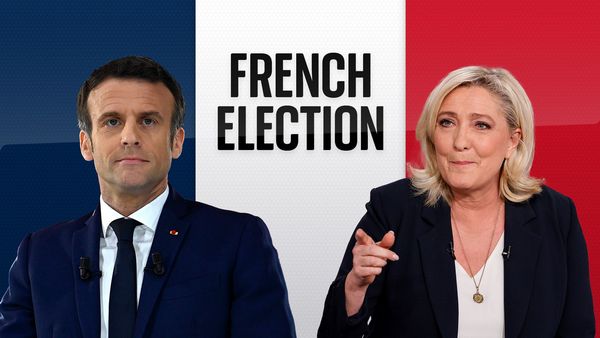 The recent Presidential ballots in France have ended as everyone predicted they would do: in the second round run-off Emmanuel Macron clearly defeated Marine Le Pen, the leader of the right-wing Rasssemblement Nationale (RN). Although Le Pen’s performance in the important pre-vote TV debate with Macron was not quite as bad as her efforts of five years ago, she remained incapable of countering Macron’s grasp of detail and his schoolboy enthusiasm for all things technical. The prior elimination of candidates representing what remains of the mainstream in French politics, made the electoral outcome horribly inevitable. Although Le Pen looked very confident about the effects of her rhetorical flourishes, her defeat represents the normal outcome of latter day Fifth Republican politics. Even if we take into account the seeming originality of Macron’s electoral majority formed around his République en March Party (LREM), it is still business as usual.

The LREM is a grouping of left and right politicians fleeing from the existing party structures; a kind of Blairite big-tent of perplexed opportunists and old sweats seeking a second youth. Its existence underlines the gradual shrinkage and fragmentation of the conventional republican centre right and a parallel demise of putatively socialist and communist parties. In reality, the supposedly left/right centre of Macronism only looks novel when contrasted with the continuing presence – indeed growth – of the party formerly led by Le Pen’s father Jean-Marie Le Pen. Her father set up the openly racist Front National (FN) to give vent to his visceral hatred of Arab immigrants, blacks and Jews. The space he created for this putrid style of politics opened the way for the somewhat less vociferous RN. A recent dalliance with respectability means that the RN remains largely bankrupt both in terms of ideas and in strictly financial terms.

Contemporary French politics, in fact, boils down to how the centre have used this extreme right excrescence to their own advantage. For conventional parties, the fact that the FN/RN persistently falls at the last hurdle of the presidential run-off is all to the good: its existence creates a feedback loop which unfailingly returns the system to its original (centrist) point of departure. This is especially true when a particularly close result provides a frisson of excitement in an otherwise stagnant body politic. This strange situation is partly due to the fact that de Gaulle’s plebiscitary monarchy established in the 1950s was designed for stability. Under its umbrella voters are gently enjoined to vote for the least-worst candidate in the two-person run-off. To begin with, the perversity of the system was hardly visible: tailor-made for the grand Charles, it offered little scope for competitors. But with some tweaking it could be made to work for politicians who lacked the general’s post-war charisma. The needed refinement was introduced by Mitterrand who – working in cahoots with Chirac – introduced dodgy reforms to the electoral system in order to maintain the FN as a looming death-star aimed at the centre of the universe. So it is that with national service long gone, the militaristic superb of the General has given way to the charmless style of one Emmanuel Macron who came to power from the élite schools and the banking sector. He is hardly a hero of the resistance. But the message for conventional politicians is clear: cynics, nincompoops and technocrats can sneak into power simply on the back of the presence of an ageing cohort of scruffy xenophobes. What a system! But it is one which has been used equally by Chirac, Sarkozy and Francois Hollande.

The Le Pen clan then, father and daughter, have operated as scarecrows – répoussoirs – who make the centre position preferable. The result, over time, has been the creation of an inward-looking political caste of untouchable top-level functionaries and corporate tycoons linked at the hip by the spinning of the revolving door leading from public sector to financial opulence. The ‘Caste’ – the title of a recent book – try to hold both ends of the political spectrum. This creates a kind of see-saw arrangement where no one is really happy to make the first risky move away from the centre. The only perspective is found in the rear-view mirror: for example, wannabe presidential candidates like to imitate the distinctive gestures of the grand Charles in the hope of squatting the comfortable middle-ground. This was easy enough for Mitterrand (who famously once denounced the system as a permanent coup-d’état), easy for Chirac but far more difficult for the twitchy and corrupt Sarkozy who in another life was a slick corporate lawyer. Macron’s youth gave him something of a Kennedy style which he used to pull off this scam. But his later success is more of a homage to the working of the system than it is to his tactical perspicacity. In reality Macron is an accident-prone youngster who believes in his own propaganda (‘France, the start-up nation’ was one of his slogans).

Can Mélenchon Save the Left?

Now we are in the run up to the elections to the legislature. This is where things could get interesting. The novelty here is the presence of Jean Luc Mélenchon ’s, France Insoumise Party: France Unbowed (what a horrible name!). JLM is a politician who started his political career in the early Mitterrand days when the left adopted reforms meant to be of benefit to ordinary people. These included the lowering of the retirement age to 60, longer holidays, the strengthening of protective labour law, a shortened working week and more statutory rights for part-time workers. In these years JLM was a senator, a professional politician unfazed by Mitterrand’s shift to the right. But he gradually moved away from the French Socialist Party as it adopted policies which put into question many of its more popular reforms. In the end, he established his own small grouping under various guises and enjoyed some moderate success as a gadfly working against a hostile political environment.

He owes his credibility on the left to his unflagging support for popular causes, his vocal anti-racism, and his genuine talent as an orator. He has correctly diagnosed the stagnation induced by the Fifth Republic and proposes a referendum to revive the legislature by switching away from the existing constitution. The constitution tends to favour the rubber-stamping of decisions made by technocrats and applied by presidential fiat. But he was narrowly defeated in the first round of the last two presidential elections partly because of his inability to handle a hostile media. Nonetheless he has a small active group in the Chambre de Deputés, support in the working-class suburbs and a growing influence outside the metropolis.

Things are now working in his favour. The mainstream Socialist Party’s presidential candidate Hidalgo harvested a catastrophically low score in the election (1.7%) and lost her deposit. Similarly low scores were recorded by the Communist Party. The unbelievably uncharismatic leader of the ecologists, Jadot, and other left parties, picked up a few crumbs. For ordinary voters, the left is weak and divided and the political centre of gravity is pulling towards the right. The Socialist Party is suffering from the legacy of weakness and a lengthening series of betrayals. Conventional politicians are now seriously working out how to the raise the retirement age back to 65 and legislation to weaken protective labour law has been adopted largely thanks to François Hollande’s government. So people are looking elsewhere.

At the time of writing, Mélenchon is trying to get the left to unite around a loose coalition under the clumsy acronym of NUPES. This means getting most of the left into his improbable and leaky lifeboat: a coalition of the communists, socialists, and ecologists. So far JLM has managed to neu-tralise the spoiling tactics of the various party leaders and complacent party hacks. The brutal fact is the left has nowhere else to go. The left coalition will be up against a macrocosm of centrist opportunists and neo-liberals, a deeply divided republican right and the inevitable presence of the spectre on the extreme right. It will be a bumpy ride but things could work out better for him this time. JLM is an unlikely candidate for the supreme office and one who openly dislikes this presidential system. But so far he has managed to pull off an impossible movement towards the union of the left in a very hostile environment. This should give the centre some reason to be afraid. For it could spell the end of the terrible legacy of de Gaulle. Whether Mélenchon is willing to shake off the darker side of Mitterrand’s legacy is another matter.