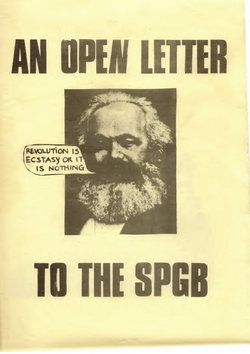 The 1972 Annual Conference of the Socialist Party of Great Britain was held at Conway Hall, London, over Easter and was attended by delegates and visitors from many parts of Britain. Among the resolutions passed were ones criticising the format of the Socialist Standard for being too formal, calling for consideration of publishing Russia 1917-67 in German and committing the Party to contesting at least one seat in every General Election. (…)

At one point the proceedings were undemocratically interrupted by a group calling themselves “the London Situationists” who noisily stopped a discussion on the need to develop Marxist theory in order to hand out An Open Letter to the SPGB. This turned out to be a peculiar amalgam of Freudian pseudo-psychology (both Marcuse and Reich, despite their opposing views), some organisational ideas and an ill-informed criticism of our policy of conscious political action, via the ballot box and Parliament, to establish Socialism. The organisational criticism boiled down to saying that the time was not yet ripe for a formal, centralised socialist group, while the political criticism failed to take into account that the Socialist Party has never said that the establishment of Socialism involves just a few million X’s for Socialism followed by a parliamentary resolution. We have always said that Socialism can only be established by a conscious, participating working class organised not only politically to capture and destroy the State machine but also outside parliament ready to take over and run industry and society generally.

The best—and most readable (most of it is written in mock political French)—part of the document which called for “the automated economy of abundance’’ was clearly influenced by our thinking anyway. Unfortunately, though they will the end they don’t will the means. The spectre of the Russian Revolution still haunts them: their alternative of our policy is “workers’ councils”, i.e. soviets!