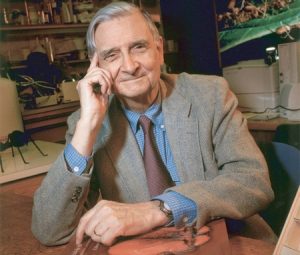 E.O. Wilson, the inventor of the theory of genetic determinism he called ‘sociobiology’, died on 26 December at the age of 92. He was an avowed opponent of socialism, writing in his 1978 book On Human Nature:

‘The perception of history as an inevitable class struggle proceeding to the emergence of a lightly governed egalitarian society with production in control of the workers… is based on an inaccurate interpretation of human nature’ (Penguin edition, 1995, p. 190).

Later research and findings in the field of genetics discredited the view that there were specific genes for specific behaviour patterns such as aggression or territoriality. Genes govern a person’s physical characteristics including certain cognitive facilities, and susceptibility to certain health conditions.

In her obituary in the Guardian (6 January) Georgina Ferry made the mistake of attributing to Wilson the view that his ‘sociobiology’ set out to refute. Referring to his book on human nature, she wrote:

‘Today most scientists accept, as Wilson argued, that genetically determined “human nature” includes the capacity to develop extremely flexible patterns of social behaviour under the influence of culture’.

Most scientists do indeed accept this, and did before it was challenged in the 1960s and 1970s by the likes of Konrad Lorenz and Robert Ardrey… and E.O. Wilson. Here, for instance, is what the anthropologist Alexander Allard wrote in 1972:

‘Culture is learned and shared. It is rooted in biology. But although this is true (the capacity for culture is part of a normal human’s brain structure), culture frees man to an unprecedented degree from strictly biological controls over the development and maintenance of behavioural systems. Culture is biologically adaptive. That is, human populations imbedded, like all animal populations, in specific environments adjust to these environments largely through culture’ (The Human Imperative, Columbia University Press, 1972, pp. 21-22).

The fact that a science writer like Ferry should make such an elementary mistake shows the extent that ‘sociobiology’ has been forgotten by scientists, though it may also reflect the fact that in later years Wilson redeemed himself to a certain extent by becoming a champion of biodiversity.

However, Wilson’s anti-socialism, as opposition to ‘a lightly governed egalitarian society with production in control of the workers’, still survives among pro-capitalist ideologues. In a eulogy of Wilson in The Times (5 January) Lord Finkelstein, the Tory peer, wrote:

‘Humans are animals too, after all, so our social organisation, our behaviour, our hierarchies, our urges will, to some extent at least, be the product of our biology.’

Our urges no doubt, but not our particular ‘social organisation’ beyond the fact that we are social animals and certainly not our ‘hierarchies’. These are only influenced by our biology insofar as our biology ‘includes the capacity to develop extremely flexible patterns of social behaviour’.

This does not mean that, as Finkelstein claims, that humans are a ‘blank slate’ or that all individuals are the same. As Allard put it:

‘Individuals are born different. The outcome of heredity and experience will lead to differences in temperament and ability which make it possible for the human group to function as a social entity.’

Socialists have always recognised this, as in the long-standing slogan of ‘from each according to their ability, to each according to their needs’. The equality socialism will bring is not through ‘social engineering’ somehow making everyone have the same abilities, but a society in which everyone, whatever their ability, has the same access to what they need to live and enjoy life.

Finkelstein is right on one point: that it is unfair to say, as some have done, that Wilson was a ‘racist’. He wasn’t. He was just an anti-socialist and a biological determinist.

Later in his eulogy, Finkelstein abandons ‘to some extent at least’ and boldly declares:

‘…Wilson was achingly, obviously right. How likely is it that human beings are the one species whose capacities and behaviour aren’t largely influenced by biology?’

It might perhaps have been unlikely that an animal would evolve whose behaviour was overwhelmingly influenced by the non-biological culture they created to survive, but this is precisely what did happen. It is one of the features that distinguishes humans from other animals. This is not Marxist or ‘left-wing’. It is simply the truth. To be convinced of this, Finkelstein just needs to consult any textbook on anthropology. He will find Ferry’s statement confirmed that ‘most scientists accept …. that genetically determined “human nature” includes the capacity to develop extremely flexible patterns of social behaviour under the influence of culture’.

One Reply to “Death of a Sociobiologist”