The Myths of Nationalism 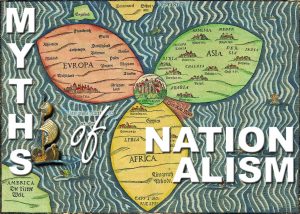 If you open an atlas, you will generally find two kinds of map there. Physical maps show land masses and islands, mountains, seas and rivers. Political maps show towns and cities but also borders of various kinds, from counties and provinces to countries. In some ways, it’s rather odd that these borders exist: they are not natural phenomena, and even a few hundred years ago, national boundaries would have been very different. Nevertheless, nations and the nationalism associated with them are often seen as essential aspects of the way the world is organised, with people expected to support the ‘national interest’, which goes well beyond supporting the national team in various sports. But there are good reasons for questioning the whole idea of nations and nationalism, and for arguing that they are all part of a world forced on its inhabitants and based on division, rivalry and setting people against each other.

An article in the November Socialist Standard criticised nationalism as ‘a dangerous diversion from the class struggle’, adding that it would just mean workers getting new masters in place of the old ones. And there are further reasons why workers should reject nationalism, including the fundamental point that the whole idea of a nation is extremely problematic. Whatever definition is adopted, there will always be exceptions, and it is just not possible to say in objective and consistent terms what constitutes a nation.

Let’s look at some definitions. Commonly cited is the one by Stalin (in Marxism and the National Question):

‘A nation is a historically constituted, stable community of people, formed on the basis of a common language, territory, economic life, and psychological make-up manifested in a common culture.’

As far as psychological make-up is concerned, he claims that nations differ ‘in spiritual complexion, which manifests itself in peculiarities of national culture’. This is vague enough to be meaningless, and so makes no contribution to the recognition of a nation.

With regard to the language criterion, Stalin notes that the inhabitants of the UK and US both speak English but do not form a nation, as they occupy distinct territories and do not share an ‘internal economic bond’. He recognises that two nations can speak the same language but maintains that a nation cannot speak several languages. But there are many countries where more than one language is spoken.

In Belgium there are three official languages, Dutch/Flemish, French and German. Stalin would presumably have to say that (leaving aside the smaller number of German speakers) there are two nations in Belgium, namely Flanders and Wallonia. There are plenty of other examples, from Switzerland and Wales to Canada, Iraq, Afghanistan and India (which has no fewer than twenty-two official languages). In addition, it cannot be claimed that multilingual countries usually have one language used by all inhabitants (in India, for instance, fewer than six in ten speak the most widely used language, Hindi).

Some approaches to nationalism make no reference to language. The following is from National Identity by Anthony Smith:

‘a named human population sharing an historic territory, common myths and historical memories, a mass, public culture, a common economy and common legal rights and duties for all members. ‘

Note the similarity to Stalin’s definition in terms of a common economy, a mass culture and such vague terms as ‘common myths’. Smith’s definition of nationalism is also relevant:

‘an ideological movement for attaining and maintaining autonomy, unity and identity on behalf of a population deemed by some of its members to constitute an actual or potential ‘nation’.’

It should be clear that nationalism is based on totally subjective notions relating to memories and culture and what some believe to be a nation. As was stated at the time of the unification of Italy, ‘We have made Italy, now we have to make Italians’.

Open the atlas again and look at a political map of Africa. Many borders consist of straight lines, and it is clear that these are arbitrary consequences of colonialism, of which colonial power ruled which area and where it was convenient to draw boundaries, rather than reflecting any genuine distinctions between nations. Instead, the lines were put in place, and nations were created as a result. Iraq, too, was assembled a century ago as an artificial entity that served the interests of the British ruling class, with special regard to access to oil reserves. Even a supposedly long-existing nation, China, has in fact consisted of different areas over time, often with rulers who were not themselves Chinese but, among others, Mongol or Manchu.

So many will say that a nation has a common culture, but what is not true is that the members of a nation have common interests. This is because all nations are divided into different classes, an elite who have the lion’s share of wealth and power in contrast to the great majority of the population. Under capitalism, the division is between the capitalist class and the working class. The capitalists are less than one percent of the population; they own the land, factories, shops, offices and so on; their income derives from rent, interest and profit; they can be immensely wealthy, multi-millionaires or even billionaires. In contrast, the working class form the rest of the population; they have to work for a wage or salary, or else depend on someone who does so; what they are paid does little more than enable them to keep their heads above water, and they are always prey to unemployment and real poverty.

In such a society, there can be no commonality of interests between the capitalists, who want to increase their profits and their power over those they exploit, and the workers. The capitalists wish to protect their wealth and power on an international stage, such as access to trade routes and markets, and they invoke nationalism to persuade workers to go along with this. Even if they share a nationality with their bosses, it is in the interest of workers to defend their wages and working conditions against capitalist onslaught, and indeed to overthrow the rulers and the system, establishing a global society where there are no classes and no borders. Where nations and nationalism are things of the past, like banks and bailiffs and charities and passports.