Small Axe (BBC One) is a polished and engaging collection of five dramas directed and co-written by filmmaker Steve McQueen, most well-known for 12 Years A Slave. As he explains, ‘the anthology, anchored in the West Indian experience in London, is a celebration of all that that community has succeeded in achieving against the odds’ (tinyurl.com/y5ne35w6). Two of the films, based on actual events, focus on how black people reacted to their suppression by the police between the 1960s and 1980s. Here we find why the anthology is called Small Axe, which comes from the Jamaican proverb ‘if you are the big tree, we are the small axe’. McQueen’s skill is shown in how he authentically recreates the sights, sounds and attitudes of the times, and brings together a talented cast who have the daunting job of portraying real people. He says that the dramas ‘are about the past, yet they are very much concerned with the present’ (ibid), particularly in the context of the Black Lives Matter movement, given added impetus through the killing of George Floyd by American police. 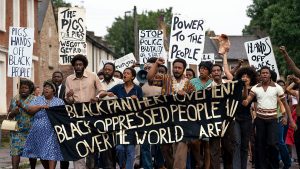 Mangrove tells the stories of some of those connected with the restaurant of the same name, which opened in Notting Hill in 1968, the same year as then-Tory MP Enoch Powell’s notorious ‘rivers of blood’ speech. Run by Frank Crichlow, the Mangrove restaurant was a lively, friendly hub for the local community as well as a meeting place for activists in the British Black Panthers, including Altheia Jones-LeCointe, Barbara Beese and Darcus Howe. Police soon turned their attention to the venue, as much because of its popularity among black people as through its links to the Black Power movement. Over the years, as many as 12 brutal raids were carried out, ostensibly on suspicion of alcohol and drugs offences, without any evidence of criminality being found. A response to the police’s targeting of the restaurant was a rally held on 9 August 1970. The 150-strong crowd, carrying a pig’s head and chanting ‘hands off black people’ made their way to the police station, where they were outnumbered and broken up, with nine arrested.

The second half of the film depicts the subsequent trial in 1971 of the ‘Mangrove Nine’, including Crichlow, Jones-LeCointe, Beese and Howe. They were charged with rioting and affray, after previous allegations against them had been thrown out of court. The trial was held at the Old Bailey, which was seen as a move to put more pressure on the nine because it was the usual venue for the most severe cases. Some of the defendants represented themselves, giving them the opportunity to directly address their accusers and show up the holes in the police’s account of the demo. Most of the Mangrove Nine were found not guilty, although four received suspended sentences for affray and assaulting police officers. When summing up, Judge Edward Clarke QC said that the trial had ‘regrettably shown evidence of racial hatred on both sides’, which was the first judicial recognition of racial prejudice in the Metropolitan Police, and a comment which the force unsuccessfully attempted to have withdrawn. The trial’s outcome is where the film ends, but in real life the police continued to harass the restaurant for many more years. Critchlow found himself in court three times until his name was cleared in 1989 and he received a record £50,000 in damages. The Mangrove restaurant finally closed three years later.

The police in Mangrove are largely presented as out-and-out racists, and their mindset towards black people is explored further in another of the Small Axe films. Red, White And Blue dramatises the beginning of Leroy Logan’s career in the force, which he decided to join in 1983 after his father was attacked by two officers. Logan aimed to increase representation of black people among the police and develop the institution from within. He was congratulated by senior staff as the best new starter among the latest batch, and became the face of a recruitment drive for more ‘coloured’ officers, as they were described at the time. Despite – or because of – all this, he found himself distanced from many others, including the young black people who called him a traitor when he walked past them in uniform, his father (who had good reason to mistrust the police) and his racist colleagues. Logan persevered and rose up the ranks to become a superintendent, as well as co-founding and chairing the Black Police Association.

Both dramas present the police force as dominated by bigoted thugs who were enabled to act out their prejudices by tradition and discriminatory laws. Having the protection of a uniform probably attracted racists to become officers in the first place. While Logan tried to improve the police from inside, the Mangrove Nine challenged them first through direct action and then by careful navigation of the judicial process. Their determination is commendable, and each helped to erode some of the institution’s racism, but they didn’t threaten the institution itself, because it’s part of something bigger. The police force has an integral role in the state, and although it would be possible for it to operate in a non-racist way, it is inherently divisive because it supports the class divide. As such, the ‘small axe’ is too small to carve out really fundamental change.