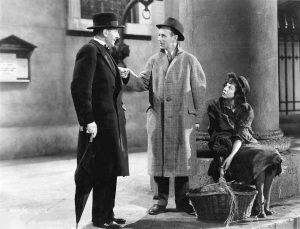 This month marks the end of an era. The play, Pygmalion, written and first performed in 1912, goes out of copyright in the United Kingdom, and much of the world. 108 years as intellectual property comes to an end. It joins all of the works of George Bernard Shaw, along, also, with the works of George Orwell, in the expiry. Both men died in 1950. The antiquity of Shaw’s writing is down to his very long life.

At the time both men died, they could have expected their intellectual property, and its income, to live on 50 years after them, however, the law was changed in 1995 to extend copyrights by twenty further years, so that intellectual property had a life of the remainder of the author’s life, plus 70 years.

Copyright asserts that that the author has the right to control their own intellectual creations: initially, as the name suggests, over who had the right to make copies of published books. This later extended to the right to prevent derivative works (using characters and instances from the created work). It also asserts the author’s right to be identified as the creator of the work.

It is, in effect, an intangible property right, that exists only because the state creates and enforces it. The first copyright law in the UK dates back to 1710, “An Act for the Encouragement of Learning, by vesting the Copies of Printed Books in the Authors or purchasers of such Copies, during the Times therein mentioned”. As this title makes clear, the intent was that people could benefit commercially from producing works and publishing them. Initially, this was limited to 14 years.

The reason this sort of protection is necessary is seen in the famous example of Charles Dickens suffering at the hands of literary pirates in America, where his works were not in copyright: within weeks of A Christmas Carol being published, pirate copies were selling freely and lucratively in the United States.

In strict economic terms then, copyright is a species of rent, arising from the artificial monopoly created by the state, hence the interest of rentiers to extend and extend the term of the copyright so that they can keep profiting from the use of the intellectual property.

The sort of value involved can be seen in the 2015 Freedom of Information Act request to the British Museum (one of the beneficiaries of the Shaw estate). That showed that the Museum gained £1.5 million from his estate between 2001 and 2014 (tinyurl.com/y596hfkg). It should be noted that this in itself represents less than a third of the income of the estate, split as it was between the National Gallery of Ireland, the Royal Academy of Dramatic Art, the British Museum and – in a final quixotic twist, an endowment towards alphabet reform. True to his form as a challenger of received notions, this last part of his bequest had to be overturned in court by the public trustee, demonstrating the limitations to the absolute right of an individual to dispose of his property as he pleases. A very Shavian outcome to Shaw’s own life.

These fine institutions will now be bereft of considerable income. This is not the first time. In the 1980s Great Ormond Street Hospital (GOSH) lost the income from J.M. Barrie’s Peter Pan works. This led to campaigns on behalf of the hospital to extend its copyright (no doubt encouraged by less worthy owners of intellectual property). In art, this drove the extension from 50 years after the author’s death to 70, but in addition, GOSH was granted a perpetual interest in the royalties of Peter Pan performances and publications in the UK (but not full copyright control to authorise performances and publications).

Intellectual property is big business. Corporations like Disney spend a lot of time and effort buying up the rights to characters and stories (like their purchase of the Star Wars franchise). Given that corporations don’t die, it is in their interest to keep property rights around for as long as possible. Even more, there is currently controversy, as Disney are apparently maintaining they have gained the benefits of the Star Wars IP, but are trying to avoid paying the author of the novelisations of the films any royalties.

The power of the copyright monopoly came to the fore during the Covid lockdown, as university libraries found that academic publishers were not making electronic copies available (which could, thus, be read by students at home) or were charging very high prices (some publishers did make ebooks temporarily available, but even that generosity could be seen as loss-leading, to get people into the habit of those titles being available). Librarian organisations have called for a review of the ebook market in the UK (academicebookinvestigation.org/).

They note that increasingly the model is for universities to pay for expensive and restrictive licences that have to be bought each year. This is the trend with intangible property, to transform one-off payments into revenue streams. Unlike when you buy a print book, when you buy an ebook you do not own a thing, you are simply granted the right to be able to read a text. This is as true for an ebook on a Kindle as it is for university libraries.

For publishers, the cost of producing a print book and an ebook is pretty much identical (actually printing is a marginal cost in the whole process), but they are struggling to find a business model that allows them to collect revenue whilst at the same time using the infinite reproducibility of electronic distribution of information.

Both Shaw and Orwell claimed to be socialists, and often made useful and important contributions to the debates and arguments for socialism (even if that took the form of needing to disagree with them). Their works becoming more widely and freely available can only be a welcome thing. Humanity gains in general from the increased availability and distribution of ideas and knowledge.