Shadow of a gunman – The Irish Republican Army 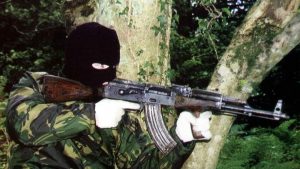 The events in Northern Ireland since 1968 caused a split in the ranks of the IRA but while the immediate problems posed by the troubles in the North may have triggered off this split it was the growing influence of Leninist ideas within the movement, and the effect these had on dividing the IRA’s reaction to events in the North, that formed the core of the division.

The breakaway element, or “Provisionals”, as they have come to be known, were led by those who resented the growing influence of “Communist” ideas in the organisation. Not only did such people feel that politics was an irrelevancy within the context of the Republican ideal of a thirty-two county Irish republic but the new political bias in the movement clashed with their Catholicism. When the Catholics of the North were under attack such elements saw the defence of their fellow-Catholics as an immediate priority and when this course was resisted by the official leadership the long-brewing dissension and division came into the open.

The result is that there are now two IRA’s in Ireland and to confuse matters still more the “official” group, that has moved away from the uncomplicated formula of a Republic, and now pursue a contradiction-in-terms which they refer to as a “Socialist Workers’ Republic”, are known as the “Traditional IRA” while the breakaway group still espouse the traditional cause—even if they are, at least in the troubled areas of Belfast, a mere anti-Protestant counterpart of the Ulster Volunteer Force.

The “Provisionals”, in an attempt to maintain their claim to the title IRA are beginning to refer to the other group as the National Liberation Front—a title which demonstrates not only the real differences that led up to the split but also places the “traditionals”, in the view of their erstwhile ex-comrades, in the position of stooges for the “Communist” Party.

Members of the working class, whether in the IRA or lending support to that organisation should realise that Nationalism is the tool of capitalism. The working class have no country—they have the choice of enduring the miseries of capitalism within the confines of national frontiers or enjoying freedom in a Socialist World.