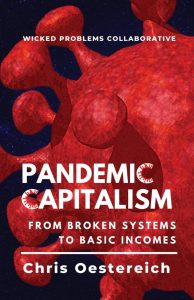 While this short book insists that the post coronavirus world can and must be one of radical change (‘a new paradigm’ as one of its chapter titles says) and one that provides a decent means of life for everyone, it nails its colours to the mast in the opening pages by quoting approvingly the World Economic Forum’s words: ‘We seriously need to consider implementing a well designed Universal Basic Income (UBI), so shocks may hit, but they won’t destroy.’ So the new world will, in the author’s view, still be one ensconced in the existing system of ‘incomes’ and not one involving the real paradigm shift of abolition of wages and salaries, of buying and selling and of money and wages. It will be, in the author’s own words and imagination, ‘a cake made of socialism with a layer of capitalism’.

Having said that, it cannot be denied that this book has a laudable aim, that of ‘finding a way to share the bounty of our planet, while working within its limits’. Its description of the kind of society we live in (‘a society rooted in cut-throat economic competition’ with ‘spiralling inequality’, where ‘necessities go unfulfilled while the privileged indulge in perversities’) is impossible not to recognise and agree with. The author is right to say that we live ‘on a planet where much of the food that is grown goes to waste, we destroy unsold garments, and homes sit empty’. The question he asks about what the world could look like if people were able ‘to choose a collaborative orientation, rather than being forced into a competitive one’ is also entirely pertinent to the endeavours of socialists to open up people’s imagination to the possibility of a different kind of world, one of cooperative work at all levels and free access to all goods and services, where, in the words of one of this book’s chapter titles, we would all be ‘sharing the bounty’.

With regard to UBI, the author is right to say that it is an idea that has very much come to the fore in recent times, the idea being that the state would pay each of its citizens an unconditional basic income. But could such a reform solve the endemic problems of capitalist society? Would it rather not be just capitalism with a few tweaks? As articles which have appeared recently in the Socialist Standard (May and June, 2020) have shown, the likely effect of UBI, even if it could be made to work, would be to redistribute poverty. The chronically poor would be slightly better off (better than nothing admittedly), but the gulf between the vast majority who own little other than their energies and the minority who monopolise most of the world’s wealth would remain. Above all it would leave the market and commodity relations, the bulwarks of capitalism, intact. So, far from the idea of UBI being, as the author puts it, ‘a stretch of the imagination’ for many people, it is actually relatively easy to imagine as reforms of capitalism go. The real stretch of the imagination is the socialist society of from each according to ability to each according to needs. So one thing we would entirely agree with the author on is his approving reference to the words of the anarcho-socialist author, Ursula Le Guin: ‘We live in capitalism, its power seems inescapable – but then, so did the divine right of kings.’ 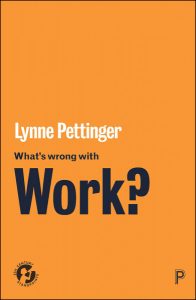 As the author says on the first page, a book with a title like this is an invitation to grumble or to comment that it’s going to be a long book. In fact it is of interest more for some of the points that are made than for any overall argument.

One important theme is the centrality of informal work, which is difficult to define but essentially applies to employment not covered by national legislation or entitlement to benefits such as paid annual leave or sick leave. According to the International Labour Organization, two billion people (just over sixty percent of global work activity) are in informal work, and this figure rises to ninety percent in developing countries, where a substantially greater percentage of women than men are informally employed. What might be called standard contracts of work are becoming rarer, with seasonal work, on-call work and zero-hours contracts being more common, even if they do not count as informal work.

The book pre-dates the move to working from home as a result of coronavirus, but still has quite a bit to say on homeworking, the ‘hidden workforce’ mainly consisting of women. Further, work can be not just hidden but invisible, as with cleaners who work when offices are otherwise closed. Cheap clothes are made by invisible workers, as nobody would supposedly buy goods made in such dire conditions if the workers were really visible.

Care work is also often hidden, taking place in people’s homes. It is usually seen as low-status and low-skilled, partly because it has generally been associated with women. Yet its importance is undeniable in terms of the health and wellbeing of those cared for. Working on and with human bodies emphasises the crucial role of connections and relations between people.

Green jobs can allegedly be supported by all sides, from government policy-makers and employers to unions and community groups. But in practice many ‘green jobs’ are dirty and dangerous, such as recycling. The manufacture of solar panels relies on processed metal ores and can be damaging to both the environment and the workers who make them.

Researchers often discuss the recent increase in informal work and the rise of the gig economy and of precarity. But Pettinger notes that ‘Informal work is globally and historically the most common form of work’. So-called full employment is really an exception, an ideal applying in western Europe from the 1950s to the 1970s, connected to the notion of a male breadwinner. Not that even then it meant there was no unemployment. 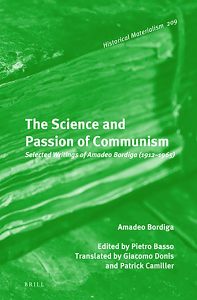 Amadeo Bordiga (1889-1970), the first leader of the Italian Communist Party who later became a prominent figure in the Left Communist opposition to Stalin, was a super-Leninist. Not only did he hold that under capitalism the working class was incapable of understanding socialism but that (for this reason) the working class should not be consulted by the vanguard party as to what to do; this party should seize power as a minority in an armed uprising and then rule on behalf of the workers. So why should he be of any interest to socialists?

After the Second World War Bordiga resumed activity (during the fascist period he had remained in Italy), which for him was mainly a question of developing a correct understanding of Marx. This led to his two saving graces – his analysis of the USSR as capitalist and his view that communist society had to be a society from which production for the market, working for wages, and using money (even as an accounting unit) had disappeared.

According to him, Russia had never ceased to have a capitalist economy. In this he followed up Lenin’s view of the ‘New Economic Policy’ that the Bolsheviks were forced to adopt in 1921 and which Lenin described as the development of capitalism under the auspices of the ‘proletarian state’ (i.e, a state controlled by a vanguard party claiming to have socialism as its aim). For Bordiga, at some point during the 1920s the ‘proletarian state’ ceased to exist but capitalism continued. He preferred to call Russia simply capitalist rather than state capitalist, on the grounds that production was in the hands of enterprises as separate accounting and capital accumulating units producing for the market. Even though he exaggerated the degree of autonomy of state enterprises, he was to be proved right to the extent that, with the collapse of Bolshevik rule in the 1990s, many of the oligarchs who emerged as open capitalists did come from the ranks of those who had managed state enterprises.

To illustrate Bordiga’s view of communism (which we call socialism) the editor has chosen an article written in 1958 entitled ‘The Revolutionary Programme of Communist Society Eliminates All Forms of Ownership of Land, the Instruments of Production and the Products of Labour’. In it Bordiga starts from a criticism Engels made of the agrarian programme adopted by the French Workers Party in 1894 which came out in favour of peasants owning the land they worked even those employing workers. Engels saw this as ‘opportunism’ in the sense of adopting a policy to attract votes that contradicted the socialist aim of common ownership by society of land. This aim, says Bordiga, rules out both peasant cooperatives and either municipal or state ownership of land.

He doesn’t object so much to the word ‘nationalisation’ (also used by Marx) as this implies that the land belongs to the people rather than to a political institution. He ends up rejecting the word ‘property’ – even as ‘common property’ – altogether as it still implies ownership by a restricted group, even if this group is the whole human population alive at a particular time. In communism the existing population would not have exclusive rights over the land to do with it as they pleased, as this would be to exclude future generations. What they will have is the use of the land which they will have to care for and hand down to future generations in the same or better state that they found it. Bordiga quotes Marx:

‘Even an entire society, a nation, or all simultaneously existing societies taken together, are not the owners of the earth. They are simply its possessors, its beneficiaries, and have to bequeath it in an improved state to succeeding generations, as boni patres familias’ (Capital, Volume 3, chapter 46).

The words in Latin are from Roman law (which Marx started to study in university) meaning literally ‘good heads of family’. Today, we would use a more familiar form of words such as ‘good stewards’.

This introduces what would now be called an ecological dimension to socialist society as envisaged by Marx. Bordiga, writing in the 1950s as a Marxist, took up this point and developed it in other writings, long before ecological movements got off the ground.

Bordiga goes on to apply this not just to natural resources but also to the instruments of labour made by humans and to the products of their work (hence the article’s title). None of these will be ‘owned’ but will simply be there to be used by good stewards. The concept of ‘property’ and ‘ownership’ is replaced by that of ‘stewardship’ though the word Bordiga uses is ‘usufruct’ (use without ownership).

Bordiga’s brand of Left Communism gave rise to various groups in the 1970s which inherited his (and Marx’s) view of communism as a worldwide society from which classes, private property, the coercive state, markets, money, wages and profits had disappeared. So he deserves some credit for keeping alive, as we have done, the original idea of socialism/communism.

Priced at over £50 this book is mainly for university libraries not the general public. Bordiga’s article is available, though in a different translation, in the Libcom online library.