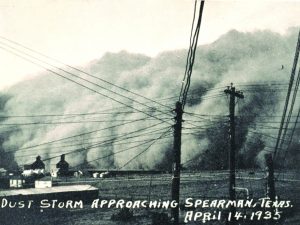 planet as lifeless as the moon’, wrote Jacks and Whyte in The Rape of the Earth: A World Survey Of Soil Erosion (1939). Soil erosion was big news in the 1930s, when rapacious farming created a dust bowl that blew ‘black blizzards’ across America from the Great Plains to New Mexico. Since then farming techniques have become less rudimentary, yet what has capitalism really learned about managing the environment? Mainly how to double down on exploiting it, and never mind the downstream consequences.

A new documentary about the future of agriculture entitled ‘The Need to Grow’ starts with the shocking report that there is only 60 years’ worth of farmable soil left on Earth, because it is being turned to flyaway dust by pesticides, herbicides, deforestation and monocropping. This 60-year figure hangs over the entire documentary like the shadow of the Apocalypse as a succession of hands-on experts tell us that we need to act now by individually growing what we can, even if it’s only a basil plant in a window box.

What does the viewer take away from all this? From a British point of view, all the yes-we-can positive vibes and skyscraping kale plants are being produced by tanned farmers in sun-drenched Californian plots, and one wonders how upbeat they would be if faced with a small damp yard in the back-to-backs of Lancashire. True, they showcase some pretty clever stacking systems to get the best out of a small space, but most workers probably couldn’t afford the upscale garden-centre prices.

And who are they kidding with this window box stuff anyway? The overwhelming requirement for any sustainable crop is space. Botanist James Wong quotes an estate agent survey saying that the average UK garden is around 3.7 square meters (although this is a dubious figure given what estate agents are wont to call a ‘garden’). With 3.7 m2, a top gardening expert growing the best all-round food crop (potatoes) in ideal conditions could only produce enough calories to last five days. To last a year would require 266m2, which is about the size of an allotment (New Scientist, 15 April – bit.ly/2OwAiTB).

If the solutions look a tad unrealistic to the average plant-challenged suburbanite, what about the premise, that there’s only 60 years’ worth of planetary soil left? Well, this figure has an interesting history. Back in 2010 a Sydney professor suggested a 60-year deadline based on estimated rates of UK soil erosion, but it was an off-the-cuff speculation about the UK only (Telegraph, 3 February 2010 – bit.ly/30nv9CG). Then in 2014 a small study looking at back gardens and allotments in Sheffield found that, not very surprisingly, allotment soil was significantly healthier than heavily-worked local farmland. Farmers Weekly reported the lead scientist as saying ‘With a growing population to feed, and the nutrients in our soil in sharp decline, we may soon see an agricultural crisis.’ Fair comment perhaps, but FW printed the story under the banner headline ‘Only 100 harvests left in UK farm soils, scientists warn’. Where was the quote mentioning this 100-year calculation in the body of the story? There wasn’t one (Farmers Weekly, 21 October 2014 – bit.ly/30kPY1x). In fact the study never made this claim, or anything resembling it. FW seems to have invented it

Other journalists with deadlines ran with the story, doubtless without checking or even reading the original, and pretty soon the 100-year figure found itself being extrapolated to the entire world, as if conditions in Sheffield somehow prevailed from the Amazon to Alaska. Less than two months after the FW story a top official of the UN Food and Agricultural Organisation was already trimming the 100-year figure down to a more headline-grabbing 60 years, but without citing a source (Reuters, 5 December 2014 – reut.rs/3eCXhae). Not to be outdone, and possibly in a bid to grab some personal column inches, UK environment secretary Michael Gove astonished audiences by ratcheting Doomsday down to a mere 30 years, citing the Sheffield study as sole evidence (Guardian, 24 October 2017 – bit.ly/3fClH4Y).

What happened to the axiom ‘extraordinary claims require extraordinary evidence’? It looks like nobody, including the makers of ‘The Need to Grow’, bothered to put in any spadework on research. Except for James Wong, that is, who spent 8 hours digging through academic publications looking for the 100-year calculation, or indeed any calculation, thereafter consulting a number of soil scientists who told him that no such calculation existed and would be impossible to derive anyway (New Scientist, 8 May 2019 -bit.ly/2Wr8PXx).

Why would anyone produce a major documentary narrated by a Hollywood star and not check basic facts? It would surely be too cynical to point to the $20 DVD price or the avalanche of sales spam you get once you’ve signed up to watch the film. More likely they believed the formula: worst threat equals highest motivation. That’s debatable, but it’s also dishonest and counter-productive, because if people think they’ve been misled by bogus facts, they’re quite likely dismiss the problem.

And soil destruction really is a problem regardless of deadline, as Wong and every soil scientist is keen to point out. Few things illustrate the existential stupidity of capitalism like its destruction of the very means to grow food. Ancient societies like the Sumerians wiped themselves out through soil destruction, so it’s not as if we’re unaware of the problem. John Seymour, quoting Jacks and Whyte above, made this clear decades ago: ‘If the soil goes we all go: let there be absolutely no doubt about that. There is no future for our species if we destroy the soil’ (Changing Lifestyles, 1991).

But in capitalism nobody is listening. Individual growers have to decide between protecting their income or protecting the environment, and altruism doesn’t pay the bills. Monocropping, pesticides and deforestation do pay the bills, with catastrophic and unsustainable effects on the planet’s soils. The profit system is incapable of altering course or stopping. But the human race can stop it, by taking the planet into common ownership and managing it sustainably. If we don’t, we risk a global tragedy of the commons that could be everybody’s funeral.