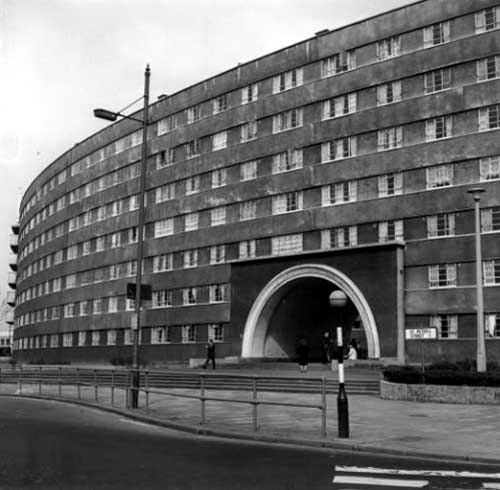 Socialists have a long history in the north of Britain. The Party’s first ever meeting was in Bolton, Lancashire. To many people, the north conjures up images of slate-grey skies, broad drawls and coal faces, ranks of pokey houses stretching down hillsides, wasp-tongued matrons, factories, fog and squalor. It’s an old stereotype now permanently fossilised into a soap opera, but in truth you can still find traces of it if you go to some north-western former mill-towns on a bad weather day.

The north was certainly grim once. Slum clearances beginning in the 1930s gave way to out-of-town ‘modern’ housing estates and tower blocks in the 1950s that became the new slums, their windswept Brutalist architecture growing graffiti, syringes and crushed Special Brew cans like urban weeds. The pubs closed in all the poorest areas as cheap ‘offies’ stole their business and communities disintegrated to the point where even the concept of ‘community’ disappeared. Sink-estate lad-gangs exercised their ire on each other in mass battles while litter filled the streets and parks like tumbleweed, left by people with no cause for civic pride. Mothers called their wayward children in for tea with the universal war cry “You! Fookin’ get in ‘ere, now!” On Friday nights at chucking-out time the streets filled with strobe-flashing squad cars and riot vans. Not that the north was anything special in that respect. The same scenes could be found repeated all across the south like a low-rent franchise chain. The Sex Pistols, a London band, captured the mood of the country in enraged 4-chord rants and razor-slashed fashion statements. If the 1930s was ‘Love on the Dole’ the 1970s was just the dole. In the Thatcher years that followed, the rage boiled over.

Socialist Party members went out postering for meetings with buckets of wallpaper paste and brushes, furtively throwing up hand-drawn posters while keeping a lookout for coppers. Risking arrest was part of the deal. Splattered in sticky slop we afterwards went and had a pint of fizzy keg ale until the nerves had subsided, hoping the meeting attendance would justify the effort, though often it didn’t. Every available wall and window of every closed-down shop was festooned with layers of posters, the new atop the old, screaming the political life of the towns, the concrete and sheet-steel social media of the 1980s. We had an ‘honour’ policy not to cover over in-date posters from other groups, even the Trot groups, though they didn’t always return the favour. We took the Socialist Standard round the pubs, selling dozens of copies to half-pissed would-be rebels, disaffected Labourites and the occasional bemused National Front supporter. Meetings reflected the age – fiery speakers and no-quarter rhetoric – which visitors either warmed to enthusiastically or cowered from in fright. It was crude, and sometimes as ugly as the concrete shopping arcades. But there was no doubt that it was alive, that the towns were alive, that politics had two fists and was prepared to use them.

And then it all changed. A creeping gentrification took over the country. Our council stopped the flyposting with a simple trick. If you flyposted a meeting for a named pub, the council threatened to fine the pub £400, and £40 for every day the posters stayed up. The pubs promptly panicked and refused to host any political meetings. Fearing retaliation by far-right groups, the pubs also banned paper sales. Councils started refusing to allow paper sellers on the streets, ordering the police to move them on, while privately-owned shopping precincts insisted on trading licences which they then refused to grant. The handful of council-maintained public noticeboards, now the sole locations for legal advertising, became warzones of competing groups. All ‘honour’ policies went out of the window in a Darwinian fight for exposure. Finally the council, reacting to alleged citizen complaints that the noticeboards were unsightly, removed them altogether.

Complaints to our local council about the dereliction of their civic responsibilities yielded the response: “Why don’t you use the internet?” Yet when the council wanted to advertise its own programme of arts events it ignored this passive medium and instead planted giant billboards mounted on lampposts all along the main thoroughfares. Calling attention to this hypocrisy had no effect. Asked who at the council was responsible for the implementation of the Local Government Act which included a responsibility for community group support, council staff had no clue, and less interest. They didn’t much care that local groups could no longer advertise their meetings to the general public. It wasn’t their concern if the democratic process had effectively been silenced. People preferred their home videos anyway, didn’t they? No wonder public meetings went out of style, and radical politics went underground.

Nowadays, when you look at some parts of the north, you see an aspiration to ape the more prosperous bits of the south: private houses which were once council houses, expensive cars in drives, well-kept lawns, litter-free streets, boutique shops, gastro-pubs, hair and nail bars, upscale vernacular new build, and money. But the walls and the windows are blank and silent. Nobody has got anything to say, or any way to say it. Everywhere the debate has moved online and left the quiet towns to their dormitory slumbers. The physical landscape has been lobotomised in the interest of taste, of civic pride and good appearances. A digital generation has grown up with no experience of public meetings, and no exposure to open debate. Instead, all the talk today is of virtual echo-chambers where people only hear the sound of their own opinions reflected back at them. Even where people still gather in the few remaining pubs, they’re all simultaneously on their phones as if checking in with a higher power. If they talk at all, it’s mostly a confection of airy gossip, TV catch-ups and supercilious wise-cracking. People don’t want to argue politics because they don’t want to upset anyone, because it’s more important to have friends than to challenge them. Victorian taboos have returned for the Facebook era.

This is the creeping censorship of the modern capitalist elites. This is how they win, not with well-marshalled facts and arguments, because they haven’t got any, nor even with ‘alternative facts’ and bogus propaganda, because people are learning not to trust them. They win when they seduce us into a suffocated torpor, our class consciousness sapped by attention-deficit amnesia, our hunger for change sugar-soaked in celeb culture, vacuous clicktivism and pseudo-radical posturing. They don’t have to be right, they only have to shut us up with a barrage of noise until we forget that we had anything to say.

Times change, fashions change, but the class struggle is still the class struggle, and we are still there, even if we’ve given up the sticky paste and brushes and the crappy hand-drawn posters. We’ve had to find other ways to operate, but we still meet and discuss and we still manage to have a laugh or two along with it. Capitalism won’t give up, but neither will we. So here’s our message to new readers. Wherever you are, north or south, if you’re the kind that doesn’t give up, come and find us, help us, and join us. It’s the only thing that will work. In the end, it’s how socialism will win.