Aberfan: Disaster In The Hillsides 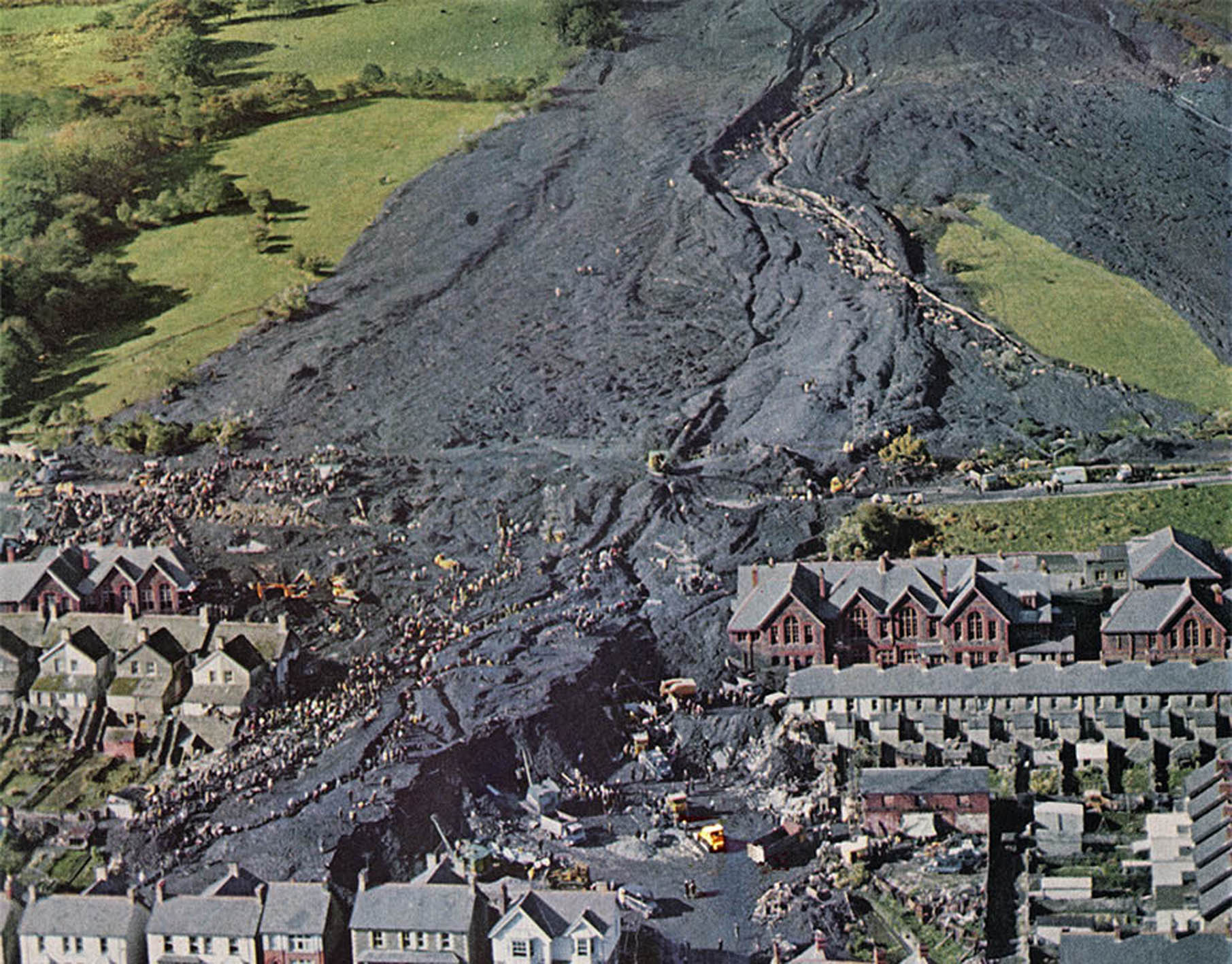 During the early winter of 1966 Hoover Limited sent a minor manager from their vacuum cleaner factory in West London to the massive plant in Merthyr Tydfil South Wales where they made washing machines. The manager took a train to Cardiff where he was picked up by one of the company cars and chauffer to take him to a hotel where he was to stay for a couple of nights. During the journey both men were silent, without the chatter which usually enlivened their journeys together. When they arrived at the hotel they got out of the car and looked across to some high land where floodlit earth machines were at work. Then the driver spoke. ‘Aberfan’ he said. It was November 1966 and they were looking at the site of the worst mining-related disaster in British history.

Aberfan is a village in South Wales which was once heavily dependent on employment at the nearby Merthyr Vale colliery. It now has a community centre, flourishing with its swimming pool, fitness rooms and café. There are also two schools, which provoke unbearable memories of that tragedy fifty years ago. Coal mining began there in 1869, when a pit was sunk on the banks of the Afon Taff; in 1875 the first commercial coal was brought to the surface – the beginning of a history proud enough to accentuate the grief and misery which devastated the village in October 1966. On that occasion the deaths did not originate underground, in a coal mine; many of the people who died were buried and suffocated in lethal slurry from the open ground above. A total of 144 people were killed in minutes; 116 were children and no survivors were found after 11am. Many of those who did survive have since suffered from persistent psychological disorders – for example the British Journal of Psychiatry in 2003 recorded that half have suffered from PTSD, which for about a third of them will persist as a lifetime disorder. A typical comment was by the author Laurie Lee who, after visiting Aberfan a year afterwards, described the school children there as ‘…the unhealed scar tissue of Aberfan’.  The colliery was closed in 1989.

The basic cause of the disaster was tipping – the deposit of spoil of varying content and consistency  which had been extracted from the colliery, onto the ground overlooking  Aberfan when more convenient lower sites had been filled to their limit. By 1966 there were, looming above the area so that they could be distantly viewed from that hotel, a number of mounds – or tips – which were known by numbers 1 to 7, the last of which was the most ominous. There was no proper regular inspection and maintenance of the tips to check on their stability although they were composed of loose rock and other extracted material within a massive layer of sandstone. This was a dangerously absorbent composition which through the addition of water from underground springs could develop into a slope steep enough to accelerate the descent of the heavier spoil and slurry which would wipe out whatever – and whoever – lay in its path. In fact some local councils had questioned, in 1963, whether it was safe to dispose of the colliery waste in that way, particularly when in the direct path of such a descending geological missile there were the village primary and senior schools as well as other inhabited buildings. But any such questions were effectively ignored by the local National Coal Board.

On that dreadful day – 21 October 1966 – South Wales had already suffered several spells of torrential rain, which in itself was enough of a problem for the pupils of the local Pantglas School as they scurried from home to the last school day before  breaking up for the half-term holiday. Soon after 9.15 am a mass of liquid containing material brought up from the mine broke free from the tips and began to smash down towards the village and the homes and the schools and the children below. A gang of workmen who were on Tip 7 to inspect a fault with the railway which carried the disposable material from the mine were resting with a cup of tea when they saw the rapidly approaching disaster but they were unable to warn the village about it because the cable of their telephone had been stolen (although the subsequent enquiry was clear that no warning could have improved the situation). The gang watched helplessly as a mass of over 150,000 cubic metres of saturated mining spoil broke free, moving down the slope in a series of surges. Some of it clung to the ground, leaving about 40,000 cubic metres to carry on into Aberfan.  ‘All I could see’ remembered one of them ‘… was waves of muck, slush and water… I couldn’t see – nobody could …’ The first victims were a farm and twenty houses which were swiftly obliterated with all the occupants. At Pantglas School the teachers were checking and recording attendance when the buildings were overwhelmed by a compound of muddy rubble up to ten metres deep. One eight-year-old recalled ‘… a tremendous rumbling sound and all the school went dead … Everyone just froze in their seats. I just managed to get up and I reached the end of my desk when the sound got louder and nearer, until I could see the black out of the window. I can’t remember any more’. The slurry eventually came to halt at about 9.15am; the damage had been done and by 11am the last living child had been brought out from the school; it was several more days before the last body could be found.

The reaction of their employers, in whatever context, and their political defenders was tediously predictable. One of the more prominent of these was the late Claude Granville Lancaster who went to school at Eton then trained at the Royal Military College Sandhurst and who eventually inherited the excessively stately Palladian Kelmarsh Hall in Leicestershire from his father along with the family investments in coal mining and farming. Like his father he was a Conservative MP, in his case for Fylde. When the Attlee government nationalised the coal industry Lancaster recognised the inevitable and ‘… gave all his support to the National Coal Board … to do his best to bring what he felt was much-needed drive and decisiveness to its cumbersome and slow-moving organisation’. He had an early opportunity to live up to these standards when the slurry came down on Aberfan but he was abroad, in what were then known as the Trucial States (since 1971 the United Arab Emirates). Soon after he returned another MP asked him to comment on the possible cause of the tragedy. To which this meticulous expert in coal mining replied ‘I fancy that you will find that it was a trickle of water’.

Another, rather different, example was a man who was raised, not into the ancient land-owning nobility but by Conservative Prime Minister Harold Macmillan to be chairman of a key nationalised industry. This was Alfred Robens who was Labour MP for Wansbeck and then Blyth until he took over Britain’s coal mines which also entailed him being ennobled, so that he became Baron Robens of Woldingham. He took to all of this with a determination which was expressed in his car being numbered NCB1 and his  access to a private jet plane and a posh flat in a most expensive part of London. These privileges he defended behind a style of management later described most moderately as demanding.

This style came under focus as the people of Aberfan were grappling with their demanding emergencies. To be specific on that day of 21st October Robens did not, as was expected of him as the overlord of the mines, attend that scene of suffering – although his staff falsely assured the Ministry of Power that he was there soothing the distress of the people. In fact he chose to attend a ceremony at the University of Surrey to be installed as Chancellor. The anger which this aroused locally was aggravated by his opinion that the original cause of the avalanche was ‘some … natural unknown springs’ which was particularly provocative to the grieving local people who had long-standing acquaintance with that very water source since they had played there as children. When the official enquiry was seriously critical of Robens’ behaviour throughout he offered to resign from the NCB but this was dismissed as unnecessary. At the same time the NCB refused to pay the full cost of removing the tips- an attitude which persisted until the first Blair government agreed to meet the bill – although without the interest which would have considerably raised the total. This evasion was pointedly described by another Labour MP Leo Abse as ‘… the graceless pavane danced by Lord Robens and the Minister, as the chairman of the National Coal Board’ and more recently by the Geoscientist –The Fellowship Magazine of the Geological Society of London:   ‘What happened in Aberfan was a mass betrayal of intergenerational equity … not only ripped the heart out of one small Welsh village – it sucked life out of an entire industry’. When Robens took over there were 698 pits; when he left there were 292. Which left the Thatcher government to carry on so that in the Merthyr area nearly 30 percent of the able-bodied were unemployed, apart from the other adults whose industrial diseases had led to them being registered as disabled.

Coal mining was always a dangerous occupation, to be taken up only because there was nothing less threatening on offer. This was the case in Aberfan. At the same time the miners had to struggle against a poverty as concentrated as the risks they endured in and around the pits. And the harsh reality of all this is that the employing class have an enduring priority that production – of coal or whatever – should be as cheap as possible. As they did in Aberfan with the over-looming tips and the workers’ homes. This was untouched by the continuing requirements of nationalisation with the substitution of management by an ex-left wing Labour MP for a traditionally aristocratic Tory. In commemorating that disaster it must not be ignored that Aberfan was an episode entirely typical of the demands of class ownership for human suffering and denial.