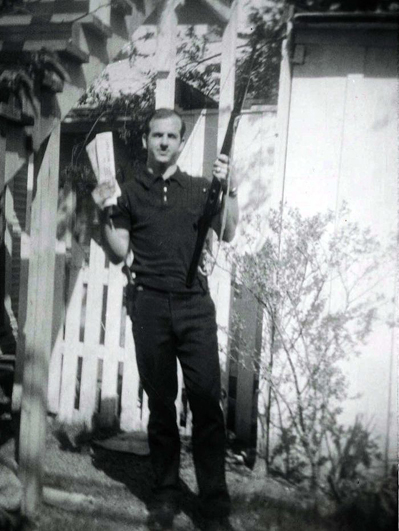 In October the media reported a claim that a notorious photo of Oswald clutching a couple of ‘Marxist’ papers was not a fake. We will let the experts settle that one, but in what sense is Oswald being regarded as a ‘Marxist’?

Many claim that the assassination of President Kennedy on 22 November 1963 by Oswald was part of a conspiracy rather than the act of a lone gunman. In some way we can be reminded of the Reichstag Fire of 1934, readily blamed by the Nazis on a ‘Communist conspiracy’ but, in fact, a lone arson attack by the Council Communist, Marinus van der Lubbe.

Lee Harvey Oswald was a leftist who at one point in his life, defected to Russia, a self-professed Marxist who became opposed to Russian-style ‘communism’, declaring at one point’ I never had a card to the Communist party. . . . I am a Marxist, but not a Leninist-Marxist. . .’.  In addition to defecting to Russia, he later also distributed leaflets for the pro-Castro Fair Play for Cuba Committee. The photograph in question shows him clutching his Carcano rifle, holding up two newspapers, The Militant, of the Trotskyist Socialist Workers Party and The Worker, of the CPUSA. He inscribes on the back of one of those photos ‘hunter of fascists.’ Oswald had already made an unsuccessful attempt to assassinate the far right-wing General Edwin Walker. His wife Marina said that he considered Walker to be the leader of a ‘fascist organization.’

Some say that his self-proclaimed Marxism was all a ruse but every person on record who knew him — family members, co-workers, associates — say he held his political views sincerely. Oswald flaunted his ‘communism’ in the Marine Corps, to the point that other marines called him ‘Oswaldskyvitch.’ Norman Mailer in his book on Oswald, Oswald’s Tale shows with ample evidence that he was a Marxist of sorts, as have Gerald Posner and Priscilla Johnson McMillan who document his leftist beliefs from the time he was 15 and was given a pamphlet defending the Rosenbergs, executed for spying for Russia. Oswald said that this pamphlet got him interested in reading socialist literature and that he later borrowed Marxist books from the New Orleans public library and that it was confirmed by classmates that he was reading these library books. Oswald became and stayed — however simplistically he understood it — a ‘communist’. We have Oswald’s public and private writings professing to be a Marxist and an admirer of Castro as well as his public and private behaviour supporting this.

During his defection to Russia he became disillusioned with life there. He wrote:

‘No man, having known, having lived, under the Russian Communist and American capitalist system, could possibly make a choice between them. There is no choice, one offers oppression the other poverty.  Both offer imperialistic injustice, tinted with two brands of slavery.’

His diary entry for the period August-September 1960 reads:

‘As my Russian improves I become increasing conscious of just what sort of society I live in. Mass gymnastics, compulsory after work meeting, usually political information meeting. Compulsory attendance at lectures and the sending of the entire shop collective (except me) to pick potatoes on a Sunday, at a State collective farm. A ‘patriotic duty’ to bring in the harvest. The opinions of the workers (unvoiced) are that it’s a great pain in the neck. They don’t seem to be especially enthusiastic about any of the ‘collective’ duties, a natural feeling. I am increasingly aware of the presence, in all things, of Libezin, shop party secretary, fat, fortyish, and jovial on the outside. He is a no-nonsense party regular.’

‘I am starting to reconsider my desire about staying. The work is drab, the money I get has nowhere to be spent. No nightclubs or bowling alleys, no places of recreation except the trade union dances. I have had enough.’

Back in Dallas, he told an acquaintance that the people in Russia ‘were poor. They worked and made just enough to buy their clothes and their food.… The only ones who had enough money to buy anything else … the luxuries of life, were those who were Communist Party officials … high ranking members of the party.’

Another acquaintance said that Oswald ‘seemed to classify all members of the Communist Party as opportunists who were in it just to get something for themselves out of it.… and [he] thought they were ruining the principles which the country should be based on. In other words, they were not true Communists. They were ruining the heaven on earth which it should be.’

Oswald’s belief in ‘communism’, as he understood it, was no doubt genuine. On more than one occasion he differentiated between ‘Marxists’ and ‘Leninists/Communists’.  Of course he was no Marxist in any sense that we understand but he did get one thing right, ironically about the futility of assassinating leaders. A police interrogator records him as saying:

‘Since the President was killed, someone else would take his place, perhaps Vice-President Johnson. His views about Cuba would probably be largely the same as those of President Kennedy… When the head of any government dies, or is killed, there is always a second in command who would take over.’