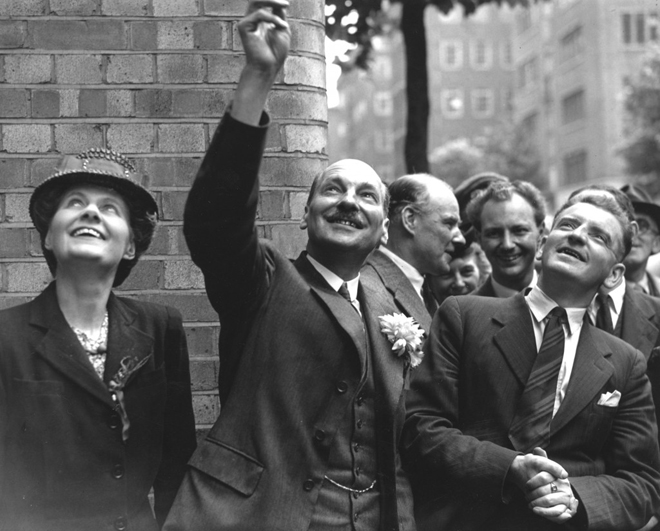 July, seventy years ago, saw the election of the first majority Labour government in Britain. Here’s what we said at the time in the Preface to our pamphlet Is Labour Government the Way to Socialism published in January 1946. We also republish a leaflet produced in Belfast, summarising what that government did to the workers.

This time no such excuse can be pleaded. As a Labour M. P., Mr. Garry Allighan pointed out in an article in the Daily Mail (31stJuly, 1945), ‘This time there can be no alibis.’ ‘Labour has no alibi left,’ he wrote, ‘If it fails to produce the goods – full employment, all-round national prosperity, international concord, health, homes and happiness for the whole people – it can fall back on no excuse.’

The Socialist Party of Great Britain does not support the Labour Party or Labour Governments. The S.P.G.B was founded in 1904 by working men and women who were convinced that Socialism is the only hope of the working class. Labour Governments cannot solve the workers’ problems. In 1924 and again in 1929 we placed on record in our official organ, the Socialist Standard, our certainty that the Labour Government just entering office was bound to fail, not because it was a minority government but because the whole idea of Labour Government is based on a wrong principle. We saw those two governments come to an inglorious end, as we knew they must, but the lesson was not taken to heart by the workers. This time there can be no good reason for failing to draw the correct conclusion. The Labour Government which entered office in 1945 cannot solve the problems facing the workers of this country. No matter how able and sincere the M.P.’s and members of the Labour Party may be they cannot succeed in making the existing social system work in the interest of the great majority of the population, the wage and salary earners.

To say this is not, however, a gospel of despair. The workers’ problems can be solved, but only by abolishing the capitalist system of society at one sweep and establishing Socialism in its place.

This great task can be brought to fulfilment, but first it is necessary to understand why “Labourism” is not and cannot be the means of doing it.

It is the purpose of this pamphlet to explain why ‘Labourism’ must fail and why Socialism will succeed.

LABOUR GOVERNMENT AND THE WORKERS (1960)

Your Labour candidate will advise you that you can improve your conditions of life by voting Labour. His Party, the Northern Ireland Labour Party, are at one with the British Labour Party. Below we give some details of Labour Government in Britain:

(1)     Used CONSCRIPT TROOPS to BREAK strikes.
(2)     Imposed a “PAY PAUSE” and “INDUSTRIAL CONSCRIPTION”.
(3)     Used (in peace time) a wartime Order, 1305, in an effort to have striking trade unionists JAILED.
(4)     Had workers RESISTING BLACK-LEG LABOUR sentenced to IMPRISONMENT and FINES under old PROPERTY-PROTECTION ACTS of 1875.
(5)     Agreed to, and tried to justify, the dropping of the FIRST A-Bomb on Hiroshima.
(6)     Safeguarded the interests of British capitalism by nationalisation of bankrupt industries.
(7)     Sent British troops to AID DUTCH IMPERIALISM, and IMPRISONED and BANISHED African leaders.
(8)     Imposed the FIRST CHARGES on the “free” Health Services.

This is but a small part of Labour’s black record when it waged war against the workers in the interests of British capitalism between the years 1945 and 1951. We challenge our Labour opponents to deny or “explain” these terrible happenings.

In this Election the UNIONIST AND LABOUR candidates stand for the MAINTENANCE of CAPITALISM. Only the WORLD SOCIALIST PARTY challenges the capitalist system and proposes an alternative―SOCIALISM.

BEFORE VOTING YOU HAVE A DUTY TO CONSIDER THE SOCIALIST ALTERNATIVE.