What About the Workers? 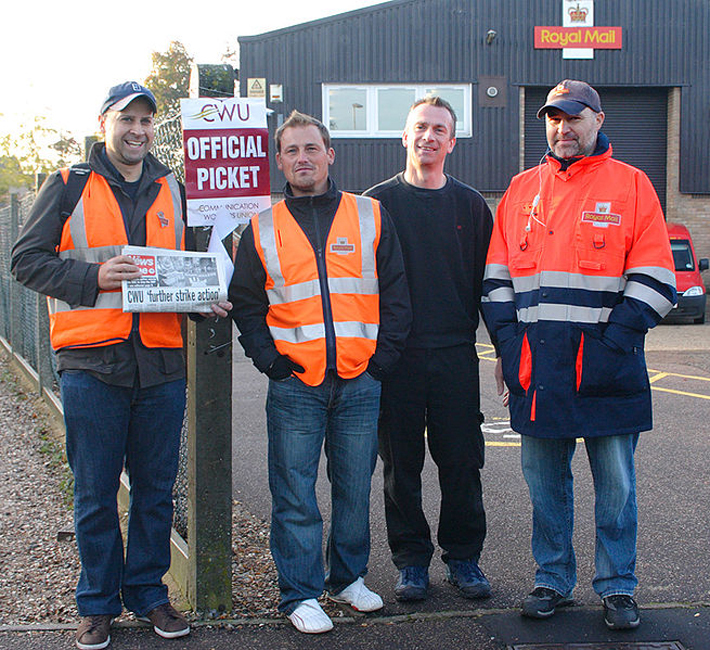 Postal rates sky-rocketed on 30 April as a prelude to the privatisation of Royal Mail, but how will the workers there be affected?

The AGM of the postal workers trade union, the Communication Workers Union (CWU), in south-west London on 25 March was a very clear example of the reformist nature of much trade unionism, the limits on its power and the differences (or lack of)  between state capitalism and private capitalism in an operation like the Royal Mail. We should also not be surprised by the cosy relationship between Royal Mail’s Chief Executive Moya Greene and the Union Deputy General Secretary Dave Ward that showed at the meeting

The Postal Workers Union has a history of Labour right-wing leadership which has been useful to the capitalist class who need ‘respectable’ labour leaders to maintain industrial peace and to help them push through their ‘reforms’. This was not contradicted by the 1971 national strike by Postal Workers who went “on the cobbles” for 47 days! In 2009, in London, Postal Workers went on strike for 20 days over a 4- month period and the CWU took Royal Mail to the High Court because they were about to hire 30,000 casual workers to break the strike. At the eleventh hour Royal Mail and CWU came to an ‘agreement’. The union sold out the workers which is an old story in working-class trade union struggles with the capitalist class. The CWU is a major financial contributor to the Labour Party, the same Party who wanted to privatise the mail a few years ago. (It was Thatcher’s government that first mooted the selling off of the Royal Mail to private capitalists.)  It is all rather ironic considering that the Labour Party originated as a trade union pressure group. The Labour Party is just an alternative party to administer the capitalist system and exploit the working class.

The 2012 Postal Services Act is now in force and the Royal Mail pension deficit of £8.4 billion has been transferred to the state: i.e. the Government will take on the liabilities. The deficit was caused by previous Royal Mail management taking a “pensions holiday” when capitalism was booming in the 1990s and 2000s but it all came unstuck with collapse of western financial capitalism in 2008.

Moya Greene has been Chief Executive of Royal Mail since 2010 and is a hatchet-woman for the capitalist class. Her CV is not salutary reading for a postal worker. Greene was in charge of the ‘privatisation’ of the Canadian National Railway, the ‘de-regulation’ of the Canadian airline industry, and at Canada Post she trebled profits although revenues dropped, and injuries to Postal Workers went up 15 percent, days lost to strikes went up to 36, and workers’ grievances against their state capitalist bosses at Canada Post went up 60 percent under her regime.  She is at Royal Mail to prepare the company for privatisation.

At the CWU AGM Greene said that we should welcome privatisation as it would mean “access to capital from an investor who wants the company to be successful,” and she stressed “We need capital”. She criticised the (state capitalist) system which currently operates Royal Mail with its “wrong-headed regulatory framework”, which restricts the amount of profits the Royal Mail can make. More profits will be made if the Royal Mail is owned by a private capitalist company. She offered financial carrots to the workforce by promising “a share in the success of the company” or “a stake in the year-on-year success of the company”, which is all that the CWU are asking for. The CWU campaign of ‘Keep the Post Public’ now has a lower profile as Dave Ward made no reference to it at the AGM.