The Not So Different World of Harry Potter 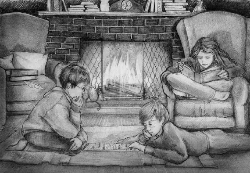 The last Harry Potter film based on the books by JK Rowling was premiered last month.
In many ways the world described in the Harry Potter books is vastly different from ours. A world of magic, wizards and witches, flying household objects, time travel. Yet despite all this we also find many similarities, especially in regards to their economic system. They, like us, have a money/wages based society.
It is not clear why wizards/witches would need a monetary economy given the fact that there is no scarcity, as they possess the powers to create almost anything with the wave of a wand. One could reply to this point with a question of one’s own of course: given the fact that we Muggles have the technology to produce what we need and more ourselves, why do we continue to rely on a system of (mostly artificial) scarcity?
One of the main differences is that while all witches and wizards own their own wands (and therefore in a sense their own means of production), in Muggle society the means of production are owned by a minority of the population, leaving the majority forced to sell their labour-power, in exchange for a wage or a salary, to this minority. It follows then that in order to utilise the non-magical technology available to us we first have to reclaim it from the minority who possess it.
Given the fact that wizards and witches have the ability to sustain themselves already available to them, why do they, like so many characters in the books continue to work for a wage or a salary? If it’s simply out of a love for the job or because of a recognition that the work they do is needed for their own and the common good, then why not get rid of the financial incentive all together and allow them to work on a voluntary basis? Yet we don’t see this, all we see is numerous examples of witches and wizards forced to go without the things they need.
An example would be the Weasley family. On numerous occasions in the books we find this family unable to afford the most basic of items. There is, for example, the moment on the Hogwarts express when Ron Weasley is unable to buy food (beginning of the first book I believe) and is forced into the degrading rigmarole of Harry insisting upon buying it for him.
What about the time he is unable to buy a replacement wand and therefore loses a duel to the financially superior Lucian Malfoy? Indeed an impartial observer using only the Weasleys as a case study could assume that poverty and lack of basic necessities was a problem affecting all in the wizarding world. However, further examination shows this not to be the case. As mentioned previously, we have the Malfoys; a very rich family who have more than they could ever want or need.
Incidentally why do the Weasleys seem constantly ashamed of their poverty? Their father (Arthur Weasley) is a highly industrious man and their mother (Mollie) has singlehandedly raised seven children, surely if there is to be any shame in their situation it is to be shouldered by wizarding society as a whole?
It is not made clear in exactly how the Malfoys are so incredibly wealthy. The vast majority of people in Muggle society who can boast such wealth have only achieved it through extracting the surplus value from the labour of those they employ, did the Malfoys exploit their wealth through similar means, or are they simply a relic of feudalism like today’s aristocracy?
It is true that in one of the books Hermione started a campaign to free house elves from chattel slavery, but there doesn’t seem to have been a movement to abolish wage-slavery.
There is also the issue of religion. It cannot go unnoticed that in the magical world of Harry Potter they celebrate Christmas. Yet given the fact that so many witches and wizards were tortured and killed in the name of Christianity (those that couldn’t employ the fire-resisting charm at least) why would they want to celebrate the birth of its founder? One can only assume that our fellow Muggles who go about expounding the supposed word of Christ have made a serious mistake; in actual fact Jesus Christ was not the Son of God but a highly advanced wizard, capable of charms that allowed him to walk on water, cure lepers, and revitalise the dead! “No spell can bring back the dead Harry, I trust you know that,” says Dumbledore in The Goblet of Fire; “Unless you’re Jesus!” should have been Harry’s reply.
JOHNNY MERCER