Profit in Agriculture: A Negative for People and the Planet

The rift between governments, big corporations and transnational trade agreements on the one hand, and majority populations the world over on the other, is reinforced by global factors linking large-scale commercial agriculture, and its food production and manufacture, with climate change.

Examples abound of laws being changed to negatively affect people, while corporations and businesses are encouraged to expand their reach and their profits. We currently have a global David and Goliath situation in which millions of Davids are being thrown to the wolves by a much smaller number of Goliaths in pursuit of sheer profit. Those Goliaths are neither interested in good, wholesome food crops, nor in protecting the health of the soil, nor the viability of the long-term water supply, nor the state of the planet. They are not even remotely concerned for the future of any of the Davids thrown off their lands.

The four biggest crops grown by large-scale commercial agricultural companies are soya bean, palm oil, rapeseed and sugar cane – all monocrops, some grown for energy production, but most for processed food commodities for the global market. These crops are grown on land once used to feed local farmers and populations with a wide range of fresh crops and animals, or in mega plantations created by destroying prime forests, which previously provided food and materials to indigenous peoples and grazing for their animals, and for whom the land is now off limits. In fifty years, 140 million hectares of these fields and forests (a similar area to the whole of the EU farmland) have been taken over for just these four crops.

The very basis of farming to produce food is soil. Soil provides necessary nutrients for plants, and to be healthy and balanced it needs thoughtful husbandry. For hundreds of generations humans have recognised the symbiosis of plants and animals; the need for nutrients from animals and rotation of crops for continued healthy, balanced soil filled with humus, worms and useful microbes.

One huge problem for soil and consequently for crops, exacerbated by the profit system, is that of commercial fertilisers. The Global Alliance for Climate Smart Agriculture, launched in 2014 at the UN Summit on Climate Change in New York would seem, from its name, to represent a positive move towards achieving good results for people and planet, but of the twenty nine non-governmental founding members three are fertiliser industry lobby groups, two of whom are the worlds largest fertiliser companies (Yara of Norway and Mosaic of the US), while several others work directly with fertiliser companies on climate change programmes. Currently 60 percent of the private sector members of this alliance come from the fertiliser industry.

Nitrogen fertilisers need huge amounts of energy to produce and are made almost entirely from natural gas. Production of this fertiliser from natural gas is expected to grow at around 4 percent a year over the next decade, relying increasingly on natural gas from fracked wells which can leak 40-60 percent more methane (25 times more potent than CO2) than conventional natural gas wells. These emissions during production, however, are just a fraction of the greenhouse gas emissions which occur once the fertilisers are applied to the soil.

The global commercial food system, increasing annually, has proved to be a huge contributor to greenhouse gas emissions. Besides the problem of fertilisers, there is the question of extensive mono-crop cultivation of feed for animals kept in enormous compounds. Crops for animal feed may be grown in Argentina, fed to chickens in Chile, shipped to China for processing, and exported to the US for sale in McDonalds. Cows and pigs are bred for meat in massive lots, producing tons of waste, fouling water systems, and releasing huge volumes of methane. Added to this, sheep in flocks of thousands eventually reach their optimum weight and, as with the beef and pork, are shipped thousands of miles before being on display for sale. When all the available data on the various sources of GHG emissions from the global food system is put together, farm to table, it reveals that this system is responsible for about half of all global emissions, from chemical fertilisers, heavy machinery run on petrol, hugely concentrated livestock operations, global transport, manufacture and processing, to unbelievable amounts of waste.

Although small farms on average consist of about 2.2 hectares (5 acres) globally, they hold less than 25 percent of world farmland (excluding China and India small farms control 17.2 percent), yet their numbers total between 85-90 percent of total farms. Shrinking numbers from forced expulsion and shrinking sizes due to inheritance laws mean that year on year small farms constitute less of the whole. Even within this scenario, small farms continue to produce considerably more food than the conglomerates and more productively, i.e. more food per acre, as this is recognised by the UN Environment Programme, the International Fund for Agricultural Development and the Food and Agricultural Organisation. Two examples:

Russia – small farms have 8.8 percent of land, from which they produce 56 percent of total agricultural output including 90 percent of potatoes, 83 percent of vegetables, 55 percent of milk and 39 percent of meat.

This may be a surprise to many, but studies certainly reveal that overall small farms are considerably more productive than big farms and produce is less contaminated with chemicals. Twenty countries of the EU, for instance, have a higher rate of production on small farms and nine of those countries register productivity which is at least double that of big farms. The remaining seven countries where the big farms are more productive reveal that it is by a small margin. One of the reasons offered for this is the low levels of employment used on big farms in order to maximise return on investment.

Other examples are Kenya, where data shows that if all big farms had productivity equal to that of small ones, then national production would double; in Central America and Ukraine it would triple; in Hungary and Tajikistan it would increase by 30 percent; and in Russia it would increase six times over.

These small farms tended by millions of global citizens, both female and male, have the knowledge and the great diversity of crops and animals to farm productively without the use of chemicals, improving soil fertility and preventing erosion. Currently, all over the planet, millions of these individuals and families are living a precarious existence, because of the pressures from global capitalist measures stacked against them.  Surely food is sustenance necessary for all, simply to survive, not a commodity to be bought and sold. The current system views anything but profit as secondary, something to be ignored or eliminated. Simple logic says profit is a negative in food production.

We can only begin to imagine how agriculture could thrive and develop post capitalism when all thought of profit has disappeared from the scene, when no time has to be spent by organisations trying to counter the negatives of capitalism, trying to conquer the hunger of huge numbers of people, and when farmers are recognised for their pivotal role in the well-being of both the planet and all its inhabitants. When farmers are free to use methods that help to alleviate harmful emissions and begin to cool the planet as they restore, rather than destroy, the soil. 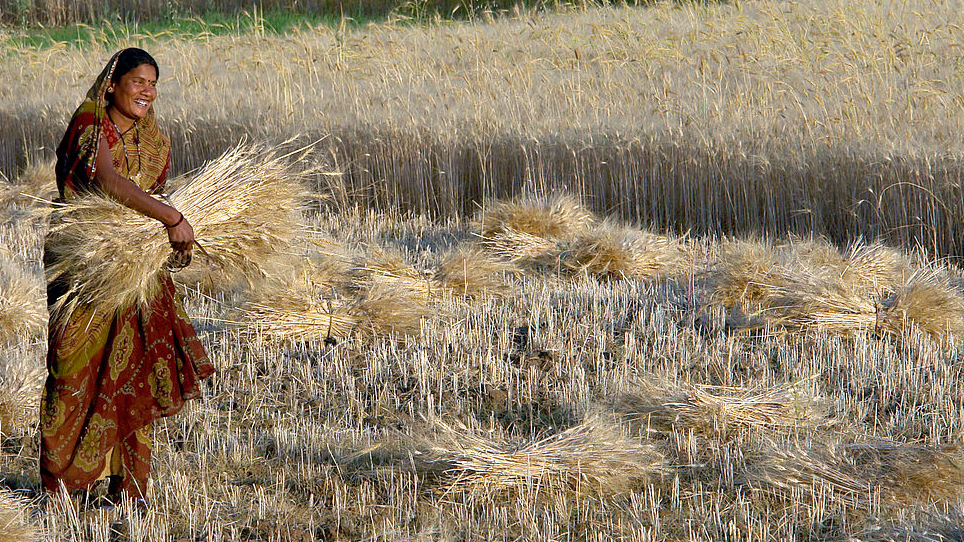 (Acknowledgement to www.grain.org which is a mine of information on this and related topics).