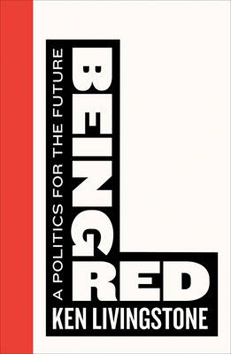 Ken Livingstone is probably not an antisemite in any meaningful sense of the term, only a fairly loose-tongued, ill-considered critic of Zionism. The reason that he has been labelled as antisemitic (among other things) is because he is a figure of hate for the Daily Mail and other titles of the right-wing tabloid press. Livingstone was the leader of the Greater London Council, which took on Margaret Thatcher in the 1980s (and got abolished for their pains), MP for Brent East from 1987 to 2001 and then the Labour mayor of London from 2000 to 2008 (initially as an independent). As such ‘Ken’ became the public face and nasal voice of what the right wing tabloids labelled the ‘loony’ left.

Livingstone was a leader of the left and much of the left, with a shallow-rooted commitment to democratic forms, is obsessed with leaders. This is the appeal of Ken Livingstone to the new Left Book Club who have issued this review of his impact in political office. The book is a review of his career that approaches hagiography, including an extended interview with him, the reflections of the man himself on his political life and a chapter on his support for the arts.

Now Ken is not one to hide his talents under a bushel. His estimate of his own worth is not a small one. Hence he is constantly telling us how often the man and woman in the street comes up to him and thanks him for the difference he made in their lives. What might that difference be? Here the highlights of a lifetime’s work within the organs of the British state are that he lowered rail and bus fares in London in the 1980s and supported the arts during his time as London mayor. Oh, and he was apparently a consensus boss, not one of those awful control freaks who have to micromanage everything (well that is his take on it anyway).

All well and good as far as it goes, after all who would argue against lower rail and bus fares, especially given the current grossly expensive public transport at a time of wages restraint on the part of employers? It’s just that this doesn’t go very far at all towards changing the balance of class politics in favour of workers (indeed many employers would be in favour of nationalisation and public transport fares at cost, cheapening the price of hiring labour-power). Surely the left must want to go further than this and the Left Book Club must be able to aim higher for its left-wing political heroes? To elevate Ken Livingstone as being the height to which working class leadership can currently aspire is a desperately depressing state of affairs.

Not for us, thanks very much. When the political ambitions of the working class match its potential to be free of its current abject wage-slavery then it won’t need leaders of Ken’s calibre, or anyone else’s. 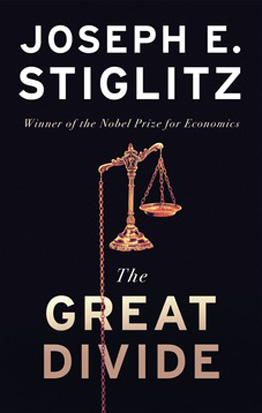 Stiglitz is a kind of dissident establishment economist, a Nobel Prize winner and former Chief Economist at the World Bank, yet who is in some ways at odds with conventional views. This volume consists of shortish essays from publications such as the New York Times and Vanity Fair, with some extra material. Most deal with the United States, but there is also some discussion of other countries, including China, Scotland and Mauritius.

The central theme is inequality and its consequences, though strangely there are no references to Wilkinson and Pickett’s The Spirit Level. As an example of the extent of inequality, an article from 2012 notes that the family that owns Walmart has wealth of $90bn, equivalent to that of the poorest 30 percent of the US population. In three years of recession, median wealth declined by 40 percent, and workers are on average worse off than their parents were. In the first three years of the so-called recovery, 95 percent of the increase in income went to the top one percent. There is no equality of opportunity in the US either, as the life chances of a child are dependent on their parents’ income and education. The children of the poor suffer disproportionately from asthma and learning disabilities.

Among the consequences of a high degree of inequality are greater instability, lower growth and less aggregate demand. This is because the very rich consume less, as a fraction of their income, than lower-income individuals. So a less inegalitarian system would supposedly lead to a more buoyant economy and almost everyone being better off. Moreover, the current astonishing levels of inequality are not inevitable but the result of deliberate policies, including the growth in importance of the financial sector.

Stiglitz sees the present system as an example of ‘phoney capitalism’, where ‘losses are socialized and profits privatized’ and markets are not truly competitive (a position more usually associated with the ‘right’ than with the ‘left’). Corporate welfarism means the banks and so on are bailed out by the government, but those who own them still make big profits and their top bosses still get massive bonuses. He is particularly opposed to what economists term ‘rent seeking’, which includes preferential tax treatment, government subsidies and the profit from controlling a monopoly. It is a zero-sum activity, devoted to gaining a bigger share of the pie rather than increasing the size of the economic pie, and just leads to an increase in wealth at the top of the scale.

As for the kind of society he wants instead, Stiglitz says we should choose both capitalism and fairness. He prefers a far more equal system and rejects austerity, which weakens demand and so discourages investment. Inequality stifles growth, and committing resources to education, infrastructure and technology will be a way of ‘putting America back to work’. With bland views like this, it is little wonder he is on the Labour Party’s Economic Advisory Committee (with Thomas Piketty).

One essay here is entitled ‘Of the 1 percent, by the 1 percent, for the 1 percent’. Nothing Stiglitz says suggests that he stands for a society where things will be different in any significant way from this.

Although ‘Dedicated to the memory of the great libertarian George Orwell,’ in much of this article Paresh Chattopadhyay is spot on, carefully recounting some of the heinous misdemeanours perpetrated by Lenin, Trotsky and their Bolshevik coterie in Russia and upholding instead some pertinent positions and principles of Marx and Engels that are in opposition to them. However, he concludes this long interesting and informative criticism and citations with the Kronstadt revolt and massacre, wherein he affirms ‘The Kronstadt sailors and toilers called this incident the “Third Revolution,” after February and October.’ This he just cites without any comment presumably because of a ‘libertarian’ perspective. But Libertarianism, be what it may, is not Marxism. As world socialists we evaluate situations from a Marxist point of view. For argument’s sake, even if the Kronstadters happened to be victorious, it was not going to be a socialist revolution anyway. You cannot achieve socialism without an exclusively clear-cut socialist goal and class-wide revolutionary organization within a matured revolutionary situation. The Kronstadters had no socialist agenda and organization and circumstances were non-socialist. They were asking for some liberal democratic rights only.

He says nothing about what we socialists have to do today to end the rule of capital.

‘Twentieth Century Socialism’ is the name he gives to Leninism-Bolshevism as the most prominent form of ‘socialism’ in the last century. This term is ill-conceived as it suggests that not only was Leninism-Bolshevism a form of socialism but that all who worked under the same name ‘socialism’ during the twentieth century, whether to educate or mislead, to organize or disarrange the working class, were as well. This use of the term ‘socialist’ is one-sided and misleading and has to be contested, as no doubt it would by Marx and Engels were they alive today.

It ignores the fact that, in opposition to all the sundry ‘socialists’, there were, and till today are, the genuine socialists in the same sense as Marx and Engels – the  Socialist Party of Great Britain (ever since 1904) and the other Companion Parties of the World Socialist Movement, of which Professor Chattopadhyay is quite aware, being personally acquainted with the World Socialist Party (India) and familiar with our Movement’s relentless presence in the socialist milieu.

He creates an amalgam ‘party-state’, and equates this with the Leninist construct and frame. This is to confuse these two very different but transient institutions. True, the Leninist ‘party-state’ was a form of ruthless state capitalist dictatorship. But that doesn’t necessarily lead to the conclusion that party and state are of no use for the working class. Both are necessary and useful during the ‘political transition’ (Marx) from capitalism to socialism, though  certainly not in their present-day capitalistic forms. These organs will have to be revolutionized, transformed and converted from their present repressive forms into a participatory democratic form – as agents of emancipation in the hands of the victorious working class. Marx and Engels were neither against nor for the state and the party in the abstract. As scientists of the working class they analyzed their dynamics – their origin, evolution, and eventual ultimate demise.

To accomplish the revolutionary historical task of replacing capitalism by the ‘free and equal association of the producers’ (Engels, Origin of the Family, Private Property and the State) the workers possess only two effective weapons at their disposal – universal knowledge of history and a class-wide revolutionary organization i.e. a participatory democratic party and movement. This is indispensable. Without such a party and movement the workers are nothing but defenceless, wretched, competitive, alienated and mutually hostile wage slaves. When workers unite for higher wages and reforms they are merely a class-in-itself. They become a class-for-itself when permeated with socialist knowledge about their common radical cause and by uniting themselves politically ‘to win the battle of democracy’ (Marx and Engels, Communist Manifesto) by unseating the bureaucratic ruling elites everywhere.

The working class will have to get this done by applying their franchise in elections state-wise and world-wide more or less simultaneously to seize the reins of states, and get them transformed to use to dispossess the capitalist class. This is done by lopping off their repressive organs, dismantling the bureaucratic-military structure, and by democratizing and absorbing the state’s useful organs into the new socio-economic formations of production for use in place of production for profit – rearranging administration of affairs of life on local, regional and global organizational scales. This will usher in, as Marx put it, a new era of equality and freedom replacing the pre-history of humanity with history proper.