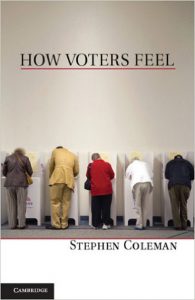 Like every other social process within the current alienated form of society, voting has become thoroughly fetishised into a hollow shell, compared with its potential. By examining the subjective feelings around voting Stephen Coleman opens up the question of how valuable that process could once again become, were it to be returned from its current status of begrudged duty into the realm of exciting, engaging action.

How Voters Feel does not seek to address the question of economic democracy or the unbridled power of transnational corporations, though Coleman does make in passing the point that:

‘Having no votes in the election of officials running the International Monetary Fund or World Bank, let alone private transnational corporations that are increasingly allowed free reign, voters understandably feel estranged from many of the most important sources of power over their lives.’

Nor does it set out to posit what function ‘representative democracy’ may or may not have in undoing the effective economic dictatorship over resources and power which currently excludes the majority of the population from any real control, and therefore engenders our demoralisation. Clearly, the parties which currently stand before the bulk of the electorate every few years are resoundingly united in seeking to manage that same economic dictatorship, as a cardinal matter of policy.

The book’s aim is to explore the experience of voting and to consider how it might be resuscitated as a potential force for change, through the cultivation of a more democratic sensibility. Such a project is especially timely given the continuing disaffection during recent years, particularly of younger people, from the parliamentary system and voting in elections (other than those in the field of entertainment, with telephone voting buoyant and enthusiastic, despite being charged for, in television shows such as The X Factor or Celebrity Big Brother).

Modern capitalism has long loved to sing of its own democratic credentials as supposedly evidenced by that magical moment of secrecy inside a wooden booth once every few years. Important as the idea of voting remains to any idea of democracy, it is nevertheless instructive to recognise how feeble a claim that is. True social democracy would take much more account of far more views, ideas, inputs and wishes than this tokenistic selection of one or other management team a couple of times per decade.

The early chapters of Coleman’s book recount the history of modern representative democracy in Britain, the USA and elsewhere, from the viewpoint of the gradually enfranchised electorate. He explains, fascinatingly, how universal suffrage was initially perceived on all sides as a possible or even likely harbinger of major social change, and specifically of state intervention to try to ameliorate conditions for the impoverished majority. The century-long journey from aspiration to grim resignation on the part of the newly enfranchised majority, from the late nineteenth to the late twentieth century, is excellently set out here.

The middle chapters (4-7) present a wealth of empirical evidence from original research consisting of sixty interviews with both voters and non-voters. A number of themes emerge from this. Voting has, in the modern period, become a private, secret and almost intimate activity, in contrast to the more public processes of previous periods. It is no coincidence that the cover of the book shows a photograph of American voters in Idaho, with their backs to us, in a neat row of cubicles looking amusingly as if they are engaging in that other universal yet ‘private’ activity of using a urinal or, in the case of the women, entering a toilet cubicle.

Amongst those interviewed, Coleman identifies the ‘dutiful voters’ who feel obliged to cast votes without any genuine expectations of a positive outcome, and the ‘committed abstainers’ who decline to vote and yet say they would resist bitterly any move to deprive them of their right to vote. He describes both of these groups as having given up on cultivating a vibrant relationship with their representatives. By his then also adding the observation how important it is for representatives to embody the feelings of those they represent, we seem to be invited to ponder how best to bolster and repair this system of specifically representative democracy.

Might it be even more useful to interpret these failings as signifying the need to reappraise that concept of democracy? Both the ‘dutiful voters’ and the ‘committed abstainers’ have indeed a somewhat dysfunctional relationship with representative democracy, in that the former place excessive weight on that relationship, despite its failure, whilst the latter are incontrovertibly suspicious of the representational process, whilst holding out for its ideal. However, one might equally interpret this, especially in the latter case, as a healthy disregard for the idea of representation itself as compared with the hope of  voting becoming less vicarious and part of something more participative, such as delegation and the idea of voting for ideas, or at least for delegates as cyphers for specific policies or actions.

There were also some respondents who on principle would go to vote but then either ‘spoil’ their ballot paper or leave it blank. This is in fact a long, noble and meaningful practice by those who simply wish to reject ‘what’s on offer’ whilst registering the importance on principle of the vote itself, and in that regard this practice makes perfect sense. It is an option which was written about in the national press at the time of the 2015 general election in Britain, and may well be increasing. It is somewhat frustrating therefore that this practice is not given more attention in  these pages than just one paragraph, which comments wryly that ‘To speak of casting a blank ballot paper as a ‘useful’ act is intriguing. It signifies absence by presence; that the voter counts and yet cannot be counted …’

Perhaps the most fascinating – and significant – section of the book is in chapter 8 which deals, amongst other areas, with the ways in which working-class children are socially conditioned into humility, and sets the challenge of how this might be reversed, to recreate a democratic sensibility comprising confidence both in self and in the prospect of change. Coleman explores many of the complex mechanisms through which ‘children internalise the range of possibilities open to them in life.’ There is, however, more inspection of the ‘how’ than the ‘why’ of this socialisation for subservience, and as a result the prescriptive parts of the chapter may be seen as somewhat optimistic:

‘If schools are to perform a useful role in preparing young people to play their part in democracy, this must entail conferring resources of hope upon those who have been routinely and systematically persuaded to think of themselves as naturally or inevitably lacking voice or efficacy.’

Having worked in many schools and been made painfully aware of their specific raison d’être, I am less than sanguine about their potential role in spearheading this necessary surge in democratic sensibility. On the other hand, the enormity of the task of overcoming vast socially and psychologically conditioned subservience is even less plausibly seen as depending on the efforts of activism at the fringes of the current systems of universal education.

In all this as in so much else, it is the class division of present-day society which most strikingly both explains why meaningful and confident civic engagement by the economically weak majority is not encouraged by the education system, and offers a practical motivational form through which this might start to be redressed.

Does the book succeed at what it sets out to do? Absolutely. It is a challenging and at times specialised and complex, yet rewarding read. There are some key questions which it would have been clearly outside the remit of this book to probe. For example, from the point of view of those working to encourage speedy social revolution, is it desirable or an impedance to work to encourage engagement with the specifically parliamentarian and representative model of democracy?

This is not a book to consult for a century-by-century chronicle of what happened in history. Rather, it provides an overview, focusing on some significant events and on what Harari sees as important trends and principles. It is a good place to look, for instance, for a summary of recent research on the origin of Homo sapiens and our relation to other kinds of Homo. And it is instructive to learn that since 1500 the global population has increased about fourteen times, but the value of goods and services produced well over two hundred times.

One point made several times is the crucial role played by co-operation. Humans are social animals and it takes a number of people to raise a child (single parents don’t do so in isolation). We can co-operate in lots of different ways with large numbers of people. Yet Harari also argues that it is money that promotes trust and co-operation, ignoring the fact that there are plenty of instances of co-operation not involving money (such as mountain rescue, Wikipedia and the Socialist Party). And capitalism, with its wages system, involves coercion rather than co-operation.

In some cases his explanation for historical events is purely idealist. In the sixteenth century the Spanish invaders conquered the Aztecs and then the Incas, supposedly because the Incas had a purely parochial outlook and were unaware of the fate of the Aztecs. Nothing to do, then, with the fact that the Spanish had guns and horses, which they did not (horses not being native to the Americas).

Unfortunately, when he discusses economics and anything related to Marxism, Harari goes well astray. For instance, he believes that any factory worker who buys some shares thereby becomes a capitalist. He gives an astonishingly simplistic presentation of the idea that banks can create credit. He sees the ‘Soviet Union’ as an attempt to implement the principle ‘From each according to ability, to each according to need’. As this last example suggests, he unquestioningly accepts that Marxism means Bolshevism, and he sees Communism as a religion (defined as ‘a system of human norms and values that is founded on a belief in a superhuman order’). This ‘superhuman order’ is some unspecified ‘law of nature’ allegedly discovered by Marx, Engels and Lenin. Communism, he asserts, does not call itself a religion but an ideology: this is quite wrong, though, since for Marx an ideology is a theory that offers a distorted view of reality (such as the view that workers are paid in wages the full value of what they produce).

So this is an interesting and stimulating read, but it also contains much that is misleading or just plain wrong.