Material World: No Peace in the Pacific 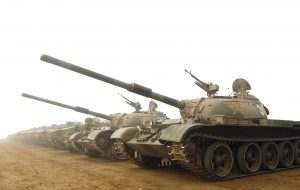 After Costa Rica’s civil war in 1948, Jose Figueres, the then president of Costa Rica, abolished the army, took a sledgehammer and began the demolition of the nation’s military headquarters. That fundamental decision was enshrined in the 1949 Constitution. To this day, Costa Rica has no army, navy or air force, no heavy weapons of any kind but instead they have the Fuerza Pública (Public Force) responsible for law enforcement and border patrol.

On September 2, 1945, a formal surrender ceremony was performed in Tokyo Bay, Japan, aboard the battleship USS Missouri. After its defeat in World War Two, Japan, as an act of remorse at its previous expansionist aggression, declared in the country’s post-war constitution’s Article 9, that the Japanese people ‘forever renounce war as a sovereign right of the nation and the threat or use of force as means of settling international disputes’ and thus restricted the Japanese military, known as the Self-Defence Forces, to engage only in self-defence. It meant that a large and technologically advanced state could not engage in any collective alliances or coalitions aiding friendly countries under attack, principally the United States or its proxy forces such as the Philippines. In the mounting tensions of the Chinese territorial claims to much of the South China Sea and its numerous islands, the full military potential of Japan requires to be deployed to protect or acquire whatever rich resources the region possesses.

Prime Minister Shinzo Abe wants Japan’s armed forces to join in military activities abroad and actively assist allies. Abe’s right-wing nationalism has created suspicion among many that it would lead a country that has long embraced pacifism into war again. The Abe government has yet to offer a full and unconditional apology for past aggression and atrocities committed by previous Japanese militarism during its period of colonisation. Abe seeks to ‘normalise’ the Japanese armed forces’ role in foreign policy and he defends the bills creating a more muscular military by saying they ‘are not for engaging in wars’ but are a deterrent to ‘prevent war.’ He has argued that the bills will allow Japan to better defend its allies under the United Nation’s collective self-defence doctrine, which allows for ‘individual or collective self-defence if an armed attack occurs.’  He describes this by the oxymoronic term, ‘proactive pacifism’ and hopes it will draw the Japanese people away from their anti-war sentiments.

Normally, amending the Constitution would require two-thirds approval in both houses of Parliament, followed by a national referendum. Abe has circumvented that process by having his government declare a reinterpretation of the Constitution and then following up a package of eleven security-related bills which, unlike a formal constitutional change, requires only a majority vote and there is no referendum. A recent survey by Asahi Shimbun newspaper showed only 26 percent support the legislation that will enable Japan’s Self-Defense Forces to engage in wars overseas. 56 percent of those polled expressed opposition.

Many countries try to bamboozle us with Orwellian language. America’s ‘Department of War’, a more truthful name, thought it wiser to re-name itself ‘Department of Defense’. Israel describes its military as a ‘Defence Force’, and by doing so, hopes it explains away the occupation of and the offensive actions against Palestinians. Wars are now called ‘peace-keeping’ missions or ‘humanitarian’ interventions.

The Socialist Party has always held that the menace of war cannot be done away with and will always loom over us while its cause, the capitalist system, remains. Modern war is really an extension of business when the economic rivalries between the vying national sections of the capitalist class can no longer be peacefully resolved or controlled. The Japanese people are to be applauded for the stand they have taken against wars of aggression. However, the realities of diplomacy and nationalism mean that the capitalist class will protect their interests in whatever way they can … and perhaps the reason their armies are called ‘defence’ forces is that they exist to defend the ruling class. It would be encouraging if all nations could follow in the steps of Costa Rica but sadly it won’t happen.  While we have capitalism we cannot have stability. Always new crises will occur and new sources of conflict will appear over markets, the sources of raw material and geo-political strategic points. Seeing the world as it really is, we know that we shall have wars because the capitalist basis for them remains.