The Underwhelming Theory of Underconsumption 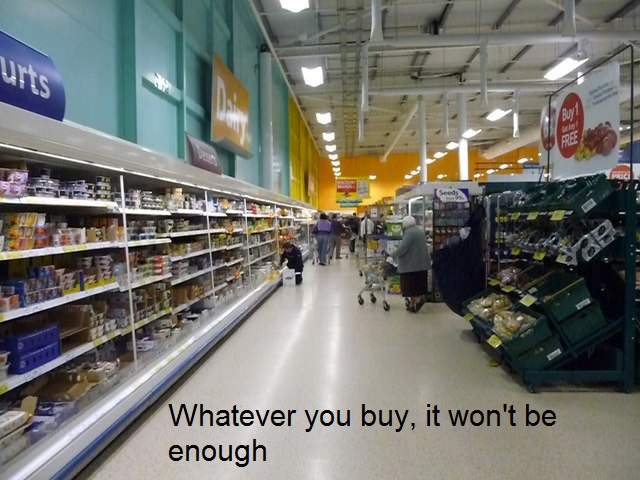 Reformists are calling on workers to fight against ‘austerity’ (not capitalism), based on the flimsy old theory of underconsumption.

An economic theory can—and very often does—live on even after it has been debunked. Over a century and a half ago Marx exposed the fallacies underlying the theory of underconsumption, but the brains of living Leftists—as in a zombie film run backwards—continue to feed off that ‘undead’ theory. The most recent example of the doctrine’s continued influence can be seen in the views of the ‘anti-austerity movement’ on how to overcome the current economic crisis.

The theory of underconsumption posits that a root cause of crisis is the inability of workers to ‘buy back’ what they have produced. The spending power of workers, as represented in their wages, is far below the value of the commodities created.

So an obvious remedy, from this perspective, would be to boost consumer demand through government spending and wage increases. This would bring consumption and production back into a sort of equilibrium. Conversely, austerity policies are doomed to fail because they put downward pressure on consumer demand at the very moment it needs to be stimulated.

This viewpoint seems almost commonsensical. During a crisis, we can see examples of unsold commodities. And workers are well aware of their own limited spending power. The theory also appeals to anyone disgusted by the sight of the rich telling us to tighten our belts as they continue to live in luxury. No wonder that the theory of underconsumption is so compelling.

So what’s the problem with it?

That there is a problem with the theory might occur to anyone who considers why capitalists would not eagerly embrace a simple remedy for crisis that would have the added benefit of easing workers’ discontent. Are capitalists too greedy? Or just stupid?

All hail the consumer

As commodity sellers, capitalists obviously appreciate the merits of increased consumer spending. Producers of everyday consumer goods, in particular, would be able to sell more commodities if workers had higher wages. Any capitalist firm, in fact, would welcome wage increases that result in greater sales of its own commodities.

The hypocrisy of capitalists only wanting higher wages for workers other than their own probably does not even cross their minds because those other workers are grouped under the reassuring mental category of ‘consumer’. Apart from the capitalist’s own workers, Marx explains, ‘the whole remaining working class confronts him as consumer and participant in exchange, as money-spender, not as worker’.

Reformists might be encouraged when capitalists express approval for boosting consumer spending, spotting potential allies in their anti-austerity crusade. But capitalists are simply daydreaming about having more customers for their products, not fretting about the state of the working class.

The contrast between the capitalists’ deep and abiding love for the consumer, and their attitude toward their own workers, is stark. There is no room for illusions when it comes to the production process they oversee. ‘Every capitalist knows this about his worker,’ Marx wrote, ‘that he does not relate to him as producer to consumer and [he therefore] wishes to restrict his consumption, i.e. his ability to exchange, his wage, as much as possible’.

For this reason alone, the ‘simple remedy’ peddled by advocates of the underconsumption theory is going to remain on the shelf like an unsold commodity.

The premise of profit

The basic reason capitalists aren’t going to buy the wage-raise remedy is that capitalism itself is premised, in an important sense, on workers’ ‘underconsumption’. That is, profit depends on the value of wages paid to workers being less than the value of the labour workers expend in production. If workers were paid enough to ‘buy back’ all the commodities they produced, the source of profit would dry up.

That doesn’t mean that capitalists are incapable of paying workers a ‘fair wage’. All that the term really means, when used in a precise way, is that workers have been paid a wage more or less equivalent to the value of their ‘labour-power’, a term Marx defined as the mental or physical capabilities that a worker possesses.

The value of labour-power, as in the case of commodities in general, is determined by the labour-time necessary to produce it. More specifically, labour-power’s value is determined by the value of the commodities (or ‘means of subsistence’) consumed by the worker to reproduce the capacity to work: such as food, clothing, and housing, as well as more intangible things like education.

This brief excursion into Marx’s theory of surplus-value was necessary to refute the basic assumptions of the theory of underconsumption. Understanding the source of profit reveals that ‘underconsumption’ is hardwired to the capitalist system. Capitalism is a system of production for profit, and profit is only possible through the extraction of what is essentially ‘unpaid labour’. If this relative underconsumption is a problem, the only solution is to do away with capitalism.

Consumer demand is important in capitalism, certainly, but profit is the system’s lifeblood. No commodity—however useful to society—will be produced unless that production is a potential means to profit. An increase in wages is tolerated up to a point—but there is a limit beyond which capitalism will not go because relative underconsumption is integral to the profit system.

A cure for crises that would effectively drain the system of profit would be as useful to capitalism as the ancient practice of bloodletting was once to the sick.

Capitalists are not going to introduce policies concocted on the basis of the theory of underconsumption. But the theory is still useful to them ideologically.

In presenting underconsumption as a cause of crisis, rather than a precondition for profit, reformists suggest to workers that capitalism can be improved to the point where the system adequately meets their needs. They also blur the reality of class conflict by saying that capitalists, too, would benefit from the increased demand that wage raises would bring.

Capitalists shouldn’t mind too much that they are ridiculed by reformists for resisting this simple solution. Far better for workers to imagine that their problems stem from a few boneheaded billionaires, than from a profit system that can never meet their needs. The irony, of course, is that the reformists themselves are the system’s useful idiots.

Reformist ideologues also can be trusted to misinterpret the criticism that socialists make of their theory of underconsumption. If a socialist points out the real limits under capitalism to expanding workers’ consumption, as we have here, it sounds ‘defeatist’ to their ears—or even like an argument in favour of austerity.

So let’s make the following point quite clear: Socialists recognize the importance for workers to continually struggle for better wages and working conditions. As wageworkers, we know only too well how capitalists are exerting the utmost pressure in the opposite direction. To abstain from that struggle—the class struggle that continues and will continue as long as capitalism exists—would be suicidal.

But socialists aspire to more than just winning the fairest possible wage under an unfair system. We think that workers should not only resist the efforts by capitalists to drive down our standard of living but also organize ourselves politically to end capitalism. The reformists dismiss this standpoint as ‘unrealistic’.

But they are the ones who have lost touch with reality. They ignore the limits of capitalism. The basic problem with their standpoint is not that they call for higher wages or reject austerity, but that they pursue those aims while treating capitalism as if it were just a mechanism for producing social wealth, rather than a system powered by profit. They spread illusions about the nature of capitalism in offering the enticing idea that there’s a ‘win-win’ solution out there for workers and capitalists alike—a simple way to expand consumption while surmounting crisis.

The theory falls flat—squashed by the reality of capitalism. And the sooner workers recognize just how thin and lifeless this theory is, the better for the socialist movement.