Book Reviews: ‘Sex, Lies and the Ballot Box’, ‘This Changes Everything’, & ‘Mutinous Swine’

With the General Election fast approaching, expect a slew of books on this theme. Subtitled ‘50 Things You Need to Know About British Elections’, this is one of the first. The chapters are short (typically four or five pages) and are written in an accessible style by a variety of UK political scientists and polling gurus. Many of the familiar names are there: Rallings and Thrasher, John Curtice, David Denver et al.

Chapters range from analyzing tactical voting, identifying who really votes UKIP, the influence of social class on voting, and why ethnic minorities still tend to vote Labour. There is lots of interest here, though it is a shame the publishers decided they had to try to spice things up further by including some embarrassingly weak chapters by staff at YouGov about sex and politics (eg the alleged sexual preferences and fantasies of different party supporters).

Many of the arguments put forward build on previous research projects like the British Election Study that have uncovered an increasingly complex range of voting behaviour in the UK. This includes large numbers of people voting for split tickets, ie voting for different parties on the same election day, such as when a General Election and local elections coincide. It also involves a decline in voting based on class factors as defined by the sociologists, though with a noticeable rise in recent decades of geographical alignment behind parties – most obviously Labour in Wales, Scotland and the North of England, and the Tories in the South and East. This geographical ‘flocking together’ occurs even when social class, housing and other factors have been accounted for. Interestingly, it would also appear that the prevailing underpinning values of voters in Wales and Scotland, for instance, are not that different on most issues to those of people in parts of the UK that tend to vote Conservative.

In sociological terms, the voters with the most traditional ‘working class’ profiles tend now to disproportionately vote UKIP when they vote at all (with a particular concentration of UKIP support among elderly white men who are – or were – blue-collar workers who had left school at 16 or younger). By contrast, Labour now gets almost as much support in percentage terms from the top fifth of income earners in society as it does from the bottom fifth. Indeed, this finding was reflected in surveys at the last couple of general elections where it was found that Labour attracted noticeably more support from readers of the Financial Times than it did of the Express, with the Labour percentage of FT readers being not too far below those of the Sun.

In many ways it appears that considerable numbers of voters are now shopping in the proverbial postmodern supermarket where parties appear like clothes brands that are either trusted or tarnished. What perhaps doesn’t come out as strongly here as it might though is that this is not just a reflection of voters clustering towards the political centre, but of parties doing this too. Indeed, arguably the most noticeable change in politics in recent decades is that managerialism has replaced political ideology or argument – parties now make little attempt to convince people of a distinctive view. Instead, like a good salesman who can build rapport with clients by ‘mirroring’ their body language and speech patterns, parties compete on broadly the same ideological ground but try to convince electors that they are personally more trustworthy, effective and professional than their competition.

If this is all rather depressing, there are actually glimpses of hope here too. Political attitudes can often change in generational waves and the chapter on changing attitudes to race in the UK is a case in point. Here Danny Dorling discusses ‘when racism stopped being normal, but no-one noticed’. He shows that the percentage of electors who would be opposed to someone in their family marrying a person from another ethic group has declined from around 55 per cent in the 1980s to about 25 per cent today as the older generations where these views were most prevalent have now died off, and with very few of the younger generation now holding these types of beliefs. This trend has been mirrored in other countries like the US and is one indicator among many that people in the main Western democracies may still be economically conservative, but are more socially liberal – and in some ways enlightened – than they have ever been before.

‘This Changes Everything: Capitalism vs the Climate’, by Naomi Klein, Allen Lane, 2014, £20

Oh what a bittersweet day: a book that makes you want to jump for joy about a topic which occasions floods of tears. Naomi Klein’s latest work should be widely read. She is bang on the money: the climate change argument is about capitalism. In short, free markets and sustainability are mutually exclusive, and either capitalism or the ecosystem has had its day. The slew of evidence on display is impressive – Klein is nothing if not a thorough case builder – and the whole book can be seen as a superb illustration of the class system at work.  She catalogues examples of the narratives being bent to suit vested interests and the dominant ideology: many parts of this we could not have written better ourselves. Talk about capitalism bearing the seeds of its own destruction.

It has always struck me as odd that so many of the rich and powerful behaved as if they had another planet to escape to, or that somehow they could end up breathing their own wealth if the atmosphere became problematic. Why on earth were they funding climate change denial movements if they themselves would also suffer when the stuff hits the fan – as 97 percent of those who know have agreed is going to happen? Klein solves this one: the climate challenge is such a threat to their ideology that they simply cannot tolerate it: the measures necessary to forestall disaster require such concerted effort that it would be essential to curtail the very market freedoms so dear to them and their position. Much like the dictators of yore, they’d rather bring all down with them than give up power; or maybe more like Magda Goebbels, the world was not worth living in for her or her family without the primacy of their Weltanschaung. Having spent the last 30 years unleashing the tiger of the neoliberal agenda, they were not going to let some bunch of green eggheads spoil the party.  This would be intolerably bad for business and thereby very bad for their interests.

As someone concerned about the environment since my teens (don’t ask…), I ended up in the Green Party.  However I left a while back as I was unconvinced about their attitude to power: how they would force vested interests to toe the line.  I came to the same general conclusion as Klein – capitalism has to go – and realised that without this step, all else on the environmental agenda is playing for time.  However here is where she and I might part company: the way forward and the alternative political landscape offered in her book is too hazy.  It is as if she pulls her punches in the last round for fear of scaring off the readers – the book is after all aimed at the mainstream  – or perhaps she really has not thought it through properly.

Her suggestion that protests and actions will emerge which must be exploited to promote the agenda is too haphazard and hazy. What is the over-arching political philosophy which will give such emergent forces any direction apart from the environment and opposition to capitalism?  The peg on which to hang the clothing of serious change is lacking in this book. Come on Naomi, at heart you’re one of us, if only you’d realise it – you can’t offer a solution without socialism.  Ducking the real question seems a bit odd after what you have written and what you plainly believe.  But  I still welcome this book like few others. In the current climate anyone who starts asking the right questions has to be congratulated. 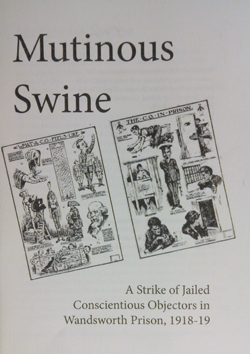 This adapted reprint from John Taylor Caldwell’s biography of Guy Aldred Come Dungeons Dark records the story of the resistance of the conscientious objectors in Wandsworth Prison towards the end of the First World War. Thankfully, it is largely devoid of Caldwell’s obsessive hero worship of the disputatious and divisive Aldred, focusing instead on the industrial unionist and ex-SPGBer RM Fox. It is, however, still marred in places by Caldwell’s Strange Misuse of Capital Letters. If the point of the pamphlet is to demonstrate the efficacy of direct action, the prisoners seeking by means such as hunger strikes and refusal to obey prison regulations to obtain concessions, it fails signally. Although direct action can be of use in achieving limited objectives, the results here were minor to say the least, redress being only obtained by the post-war amnesty. Nonetheless, the pamphlet is a good read, as indeed are most publications of the group, and provides a valuable antidote to the 1914-18 blood-and-mud remix currently peddled elsewhere.