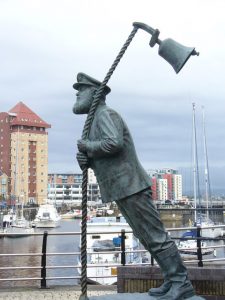 On 9 November it is the 60th anniversary of the death of the ‘Welsh bard’ Dylan Thomas, famous for his prose poem Under Milk Wood, and poems such as Do not go gentle into that good night and And Death shall have no dominion.

In 1934 Thomas wrote ‘I take my stand with any revolutionary body that asserts it to be the right of all men to share, equally and impartially, every production from man and from the sources of production at man’s disposal, for only through such an essentially revolutionary body can there be the possibility of a communal art’.

In 1933 Thomas had met ‘communist grocer’ Bert Trick in Swansea who became his mentor. Thomas visited Bert’s grocer’s shop in Brynmill which Thomas recalled in Return Journey: ‘Bert Trick in the kitchen threatened the annihilation of the ruling classes over sandwiches, jelly and blancmange’. In 1933 Thomas writes of ‘an outgrown and decaying system in which light is being turned into darkness by the capitalists and industrialists’ and that capitalism because it ‘seeks only profit for the few is not an efficient mechanism for satisfying the needs of the many’.

Thomas wrote that ‘society to adjust itself has to break itself; society has grown up rotten with its capitalist child, and only revolutionary socialism can clean it up’. Later he writes ‘If it can be forced home on the consciousness of the people that the present economic system is ethically bad, the seed has been planted that may in time grow into a fine revolutionary flower’. He saw society ‘composed of financial careerists and a proletarian army of dispossessed. Out of the negation of the negation must rise the new synthesis’.

During the Second World War Thomas made films for the Ministry of Information such as A City Re-born which looks at Coventry and he says about war-time production that it ‘makes you think what a hell of a lot they can produce if it’s for use and not for sale’.

After the war Thomas wrote two film screenplays; The Doctor and the Devils based on the body-snatchers Burke and Hare in which he portrays the class nature of society and Rebecca’s Daughters based on the toll gate riots in Wales in 1843 in which he says governments only bring in reforms when they are ‘afraid of a revolution’.

In 1952 on tour in America Thomas gave free poetry readings for the Socialist Party of the USA. He died in the Chelsea Hotel in New York City sixty years ago this month. 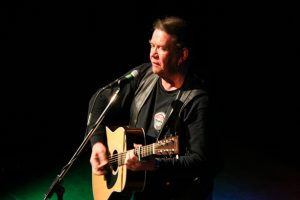 Dick Gaughan, the singer-songwriter recently played at The Cellar Upstairs folk club at the Exmouth Arms, Euston in London. Gaughan, of Irish descent was brought up in the musical traditions and culture of the Gaels; the Scots and Irish in the port of Leith near Edinburgh.

Gaughan began his recording career in 1972 in the Scots-Irish celtic band, The Boys of the Lough, played with Brian McNeill, fiddle player with The Battlefield Band, recorded a tribute album to Ewan MacColl, recorded a tribute album with Bert Jansch to Woody Guthrie, duetted with Billy Bragg on The Red Flag on the album The Internationale, and worked with 7:84, the ‘left wing agit prop’ theatre group.

Gaughan interspersed his set with anecdotes of his life in music and slices of Scottish radical, nationalist and Irish socialist history. He tells the audience that somebody said he was an ‘unreconstructed socialist’. His website lists Karl Marx, Lenin, John Lennon and Groucho Marx as influences, and he supports the Morning Star newspaper. His song Ballad of ’84 describes the 1984-85 Miners Strike and salutes Miners leaders Arthur Scargill, Peter Heathfield, and Mick McGahey.

Gaughan performed The Yew Tree by Brian McNeill which describes the 1513 battle of Flodden, and also Calvinist John Knox. He performed Now Westlin Winds by the Scots bard Robert Burns and another Brian McNeill song No Gods (and Precious Few Heroes) which describes the defeat at Culloden. The song Thomas Muir of Huntershill by Adam McNaughton is about the Scots political radical Thomas Muir, supporter of the French Revolution, friend of Tom Paine, and who in 1794 was sentenced to 14 years transportation to Australia for high treason.

Gaughan performed the elegiac Song for Ireland by Phil & June Colclough, and then speaks of the James Connolly, ‘Big Jim’ Larkin and the 1913 Dublin Lock-Out which involved 25,000 workers and lasted five months. Connolly was a Scot of Irish descent like Gaughan, for a while a socialist in the Scottish Socialist Federation and later the Socialist Labour Party. Stephen Coleman wrote that Connolly’s impossibilist ideas (socialism is impossible until the working class understands what socialism means) were an influence, among others, upon Jack Fitzgerald, a founding member of the SPGB in 1904. Connolly later abandoned this socialism and took up Irish nationalism and the armed struggle in the 1916 Easter Rising for which he was executed by the British.

Gaughan concluded his set with Geronimo’s Cadillac by Michael Martin Murphey which describes how Indian land was taken by the White Man and the Indian people given capitalism in return.