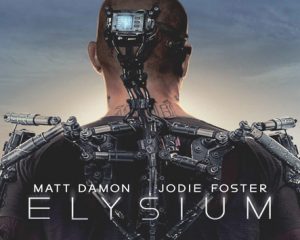 By the middle of the 22nd century, the super-rich have gone beyond gated communities and exclusive enclaves. They have moved off-planet to an orbiting space station called Elysium, where they live in idle luxury with mansions and swimming pools, enjoying the best possible health care. Back on an overpopulated and polluted Earth, workers live in slums, battle unemployment and hard and unpleasant work, and have rudimentary health care.

That is the scenario in this film, starring Matt Damon and Jodie Foster. The stark class division is driven home in a scene where the scumbag CEO of one company tells a foreman not to breathe on him. The drive for profits means there is little or no concern for the workers who produce the goods and services.

[Spoiler alert] Let’s not worry too much about the plot, which is so flimsy it has to be padded out with a lot of fighting. A power struggle among the elite results in the inhabitants of Earth being granted Elysium citizen status, and the film ends with shuttles leaving the space station to provide decent health care on the planet below.

Unfortunately it is this power struggle, plus a few rebels from among the workers, rather than a mass revolt, that leads to this optimistic ending. It is also left unclear to what extent the Earth–Elysium division will be overthrown. But the political strength of the film lies elsewhere, in its depiction of a society divided so obviously that it is undeniable. And this is surely meant as a comment on the present day, not just a fable about the future.