Film Review: “Death of a Salesman” 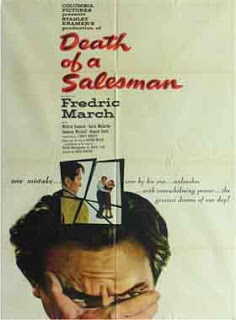 Death of a Salesman, directed by László Benedek (1951)

This film version of the successful play was recently generally released (though not to the main circuits) and is well worth a visit to one of the few cinemas that will show it. Its theme is somewhat different from the conventional Hollywood dramas and it has a social significance that is all too rare in films. It is the story not merely of Willie Loman, ageing merchandise salesman, but of the whole business of buying and selling in a highly competitive society. Usually, screen characters are shown as wholly “good” or “bad” and undergoing no significant change in outlook as a result of what happens to them. For once we see, in this film, recognition of the fact that men are largely made what they are by the sort of environment in which they have to live.

Willie Loman, superbly played by Frederic March, is portrayed as a failure who refuses to believe that he is not the success that he thinks he should be. At sixty-three, having been “on the road” all his working life, he is worn out, more mentally than physically, through having tried to make himself well known, well liked and remembered by his customers. He makes a fetish of the “power of personality” as a factor in business success. He is, in Hollywood jargon, “all mixed up” and is shown as re-living past episodes and talking in his imagination to people he knows. In one scene he wonders if he has brought up his two sons to believe in the right things, and has an imaginary conversation with his dead, but successful, brother about them. Brother Ben, to show that you must be tough to make your fortune in this world, invites one of the boys to take a punch at him, and after a short struggle the boy is on the ground with a cane pointing in his face. Then come words which should haunt the memories of all who have lauded the merits of the scramble for wealth and power—”Never fight fair with a stranger in the jungle.”

The film pulls no punches in depicting the sort of behaviour and situations that result from the condition of cut-throat Capitalism, though unfortunately (but not unexpectedly) it does not refer to the system directly. It has presumably been given an “X” certificate (adults only) because of the suicide, and its failure to disguise the prostitute as the usual “barmaid” or “ hostess.” Other touches of realism are the references to the hand-to-mouth existences of the vast majority of people, even in the “prosperous” cities of America. Faced with the problem of meeting the last payments on his car and refrigerator, Willie remarks, “ It seems they make these things so they’re worn out just when you finish making the payments on them.”

Part of the story deals with the efforts of his two sons to earn their hirings on the basis of their father’s teaching about success, and the importance of being well liked as the royal road to it. One of them has had a number of jobs, most recently working on a farm, and is keen to become an executive with the firm for which he once worked as a shipping-clerk. The fatherly advice includes “Don’t tell him you worked on a farm—say you were in business in the West”— typical of the fantasy and deception that abound in the whole business world.

When, having lost his job, Willie makes it obvious that he intends to commit suicide, his uncle tries to talk him out of it by saying that no one is worth anything dead. But Willie, whose life is insured for 20,000 dollars, knows otherwise. At his graveside his uncle says, “Willie was a salesman and as a salesman he traded in dreams.” Yet nobody, no matter how accustomed to the almost ritual happy endings, could really believe that with the death of one salesman had died the evil which was the underlying theme of the film.

The purpose of this review is not to prove that such films as “Death of a Salesman” are a form of propaganda for Socialism. Not for one moment does this particular film hold out the prospect of a world in which the necessity to buy and sell would not exist. But it does, at any rate, constitute a powerful criticism of the capitalist way of life and reinforces the arguments of socialists against prolonging it.