After last month’s shit-show by the UK Tory leadership, you have to ask yourself why people believe in following leaders at all, when the consequences of doing so can be disappointing at best, at worst spectacularly awful.

Many scientists think we’re programmed to. Leaders perch at the top of hierarchies, and if you look the word up you’ll find the common claim that hierarchies are built into us, and not just us but all animals. ‘Social groups across species rapidly self-organize into hierarchies, where members vary in their level of power, influence, skill, or dominance… A wealth of evidence indicates social hierarchies are endemic, innate, and most likely, evolved to support survival within a group-living context’ (bit.ly/3yOkGCa).

If this is so, how can we advocate a classless and egalitarian social system? Doesn’t hierarchy scupper socialism?

If by hierarchy we are talking about royal rulers and the oppressive machinery of class societies, palaces, slaves, and all the rest of it, then it is obvious that these are not built into humans, because good evidence for this highly stratified behaviour is only seen within the last 10,000 years, a mere thirtieth of the 300,000 years that anatomically modern humans have existed.

Prior to this, human activity mainly consisted in immediate-return hunting and gathering (HG), an uncomplicated and egalitarian lifestyle sometimes called ‘primitive communism’ and based on sharing resources. HG bands were typically small and mobile, though they may have been part of regional and even continental communities, and any property that did exist was little more than tools and trinkets. Interestingly, studies of modern HG groups show that they often find domineering behaviour insufferable, and actively combat it using tactics like ‘reverse dominance’. Anthropologist Richard Lee quotes one HG member: ‘When a young man kills much meat, he comes to think of himself as a big man, and he thinks of the rest of us as his inferiors. We can’t accept this. We refuse one who boasts, for someday his pride will make him kill somebody. So we always speak of his meat as worthless. In this way, we cool his heart and make him gentle’ (bit.ly/3yNeWJ9). What this suggests is that an innate tendency to hierarchy might exist but that, other things being equal, human groups have no problem keeping it in check and under control.

What happened to humans 10,000 years ago to disrupt aeons of peaceful coexistence? This period saw the shift from hunting and gathering to settled farming, a radical change in the mode of production. With farming, you have to stay in one place and work it, and investing labour in a plot of land creates a ‘value’, both in terms of sunk cost and of productive potential. This value might only be notional in a situation of abundance, but it becomes worth preserving and defending where scarcity enters the equation, which may happen with rising populations. At first the ‘property’ might be shared, but a ruthless warrior elite will have the incentive to monopolise it and then use artificial scarcity as a power base. At this point, whatever social customs exist to keep latent hierarchical tendencies under control are overwhelmed. One way or another, farming historically ushered in all the oppressive apparatus of property ownership including ruling elites, religion, civil administration, money forms, social stratification, massive inequality, slavery and organised warfare.

Today, defenders of capitalist privilege are happy to justify all this, in a kind of broken-eggs-and-omelettes way, by pointing to the modern benefits of civilisation, and by ignoring the role that artificial scarcity continues to make in shoring up these hierarchies. They also may hay with the word primitive in the term primitive communism, arguing that HG groups were only egalitarian because they were incapable of anything more complex, and that any non-hierarchical alternative to capitalist inequality must necessarily be a retrograde step that would undo civilisation and take us back to living in huts.

In the first place, we have seen that egalitarianism is not some passive factory default but an active process of collective social management. HGs like it that way, and work to keep it that way. 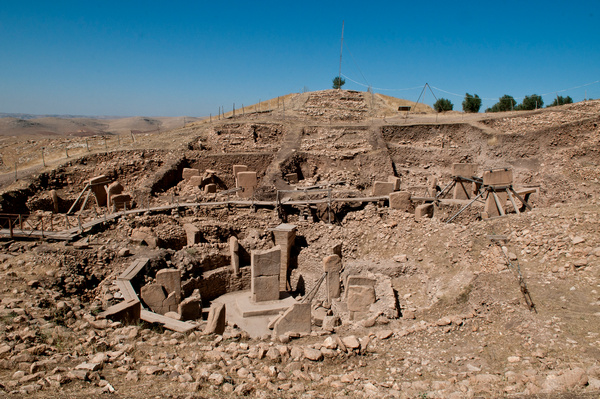 Secondly, archaeology has some bearing on this. If HG groups were primitive and incapable of complex culture and social organisation, then large-scale projects such as monument building were clearly out of the question. But excavations at the 12,000-year-old site of Göbekli Tepe in Turkey are overturning this assumption. Not only does it appear that HGs were indeed able to build monuments, but also that large-scale organisation and interaction were possible before the mechanisms of settled farming, property and social stratification existed. Bottom line: you don’t need hierarchies to do fancy stuff.

If a ‘dominance drive’ is universal and innate among animal species, it seems to be more like a dial than an on/off switch. In some animals, like elephants, manatees, bonobos, bats, the dial is set low. In others, the dial is turned right up to despotic. Some interplay of genetic and environmental factors is clearly at work. Humans don’t have just one behaviour, we’re very adaptable, and as a highly social animal, good at cooperating. But hierarchies don’t help, if anything they get in the way. A study cited in Nature suggests that hierarchies actually hinder the process of cooperation: ‘Compared to a condition lacking hierarchy, cooperation declined in the presence of a hierarchy due to a decrease in investment by lower ranked individuals.’ And it doesn’t matter whether the hierarchy is deemed justifiable or not: ‘hierarchy was detrimental to cooperation regardless of whether it was earned or arbitrary’.

And this is to say nothing of the strong case, eg, Michael Marmot’s 2004 Status Syndrome, that hierarchies cause massive stress, ill health, low fertility and high mortality. Rather than being a rocket booster to civilisation, hierarchies hobble us, make us ill and piss us off. Hunter gatherers weren’t daft. They always knew hierarchies caused trouble, and were best avoided. Socialism would simply apply the same ancient wisdom.