The Labour Party, the flag and the big stick 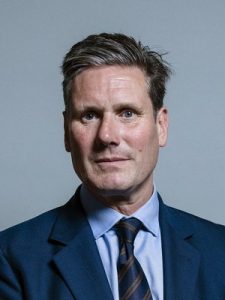 ‘Keith Starmer’s fondness for Union Jacks does not make him a nationalist, Labour frontbencher says’ (Independent, 16 February). So what, then, does it make him? According to the frontbencher concerned, Labour’s Shadow Welsh Secretary, an unknown called Jo Stevens, it made him a ‘patriot’. But what is the difference between a nationalist and a patriot? None, really. They are two different ways of referring to those who identify themselves with one particular state or would-be state.

In 1775, before the word ‘nationalist’ had been coined, Dr Johnson famously referred to patriotism as ‘the last refuge of a scoundrel.’ We don’t suppose Stevens meant that Starmer was a scoundrel. That would mean she was one too, since, as a member of Labour’s leadership team, she will endorse the current Labour Party fondness for draping themselves in the Union Jack to show it is as patriotic as any true-blue Tory.

At one time the Labour Party projected itself as the party of peace, of settling disputes between countries through the UN rather than military action. But that was a long time ago now, except that when he was Leader of the Labour Party Corbyn tried to revive it. Starmer now wants to distance himself as much as possible from this. He has been advised that it is a vote-loser and so contradicts the primary aim of the Labour Party which is to win elections so that the professional politicians who lead it can pursue their careers by becoming ministers of the Crown.

‘The party of NATO’

The lengths to which the Labour Party is prepared to go seem to have no limit. In an interview with the Times (9 February) Starmer declared: ‘we have always been the party of NATO’, a military alliance that has been involved in recent decades in a number of wars (Yugoslavia 1999, Libya 2011, Afghanistan 2001-2014). Actually, what he said is true. Labour can claim to be ‘the party of NATO’. It was the post-war Labour government that took Britain into NATO in 1949 and it was a Labour government that sent armed forces to bomb Yugoslavia – the last time, as the media has forgotten, that hospitals and fleeing refugees were bombed in Europe.

To show that Labour is ‘the party of NATO’ and supports its possible expansion into Ukraine, Starmer visited NATO’s headquarters in Brussels on 9 February. A month later he was in Estonia to visit British troops stationed there on the frontier with Russia. Clearly, he wanted to demonstrate that, as a prospective Prime Minister, he too can be bellicose when required.

Further, when the Labour Party’s youth section tweeted a criticism of his support for NATO expansion into Ukraine he blocked their Twitter account (Independent, 23 February). Similarly, when 11 Labour MPs signed a statement that criticised ‘NATO expansionism’ he threatened to withdraw the whip from them if they didn’t withdraw their signatures (they did) (Guardian, 24 February).

When in government, they were never really the ‘party of peace’. All the Labour governments there have been have supported maintaining and improving the military might of the British capitalist state. The decision to develop the British A-bomb was taken by the post-war Labour government. The Labour Party’s leaders, even when in opposition, opposed giving up the British Bomb as CND wanted.

In any event the United Nations, which the Labour Party once promoted as the way to avoid wars, is a talking shop that’s quite incapable of preventing wars occurring. Its Charter even condones war under certain circumstances. Article 51 stipulates that ‘Nothing in the present Charter shall impair the inherent right of individual or collective self-defence if an armed attack occurs against a Member of the United Nations’. The only effect of this has been that states wanting to go to war need to find a pretext to declare it defensive and therefore not ‘illegal’ under the UN Charter. This may well be why Russia is insisting that its action in Ukraine is not a war but only a ‘military operation’.

War, the threat of war, and preparations for war are built into the global capitalist system involving as it does economic competition both between capitalist enterprises and between capitalist states. Economic conflicts arise over sources of raw materials, trade routes, markets and investment outlets, and strategic points and areas to protect these.

Capitalist states resort to war only as a last resort when they consider their ‘vital interests’ to be at stake. Waging a war is expensive and interrupts profit-making. Normally states try to solve their differences by negotiations. In such negotiations might is right, so each state seeks to arm itself with the most destructive weapons it can afford. The pre-WW1 US President Theodore Roosevelt described the ideal foreign policy for a state as ‘speak softly and carry a big stick’. Aneurin Bevan, when Labour’s shadow Foreign Secretary, made the same point at the 1957 Labour Party Conference when he opposed Britain unilaterally giving up the Bomb on the grounds that he didn’t want ‘to go naked into the conference chamber’.

If, however, diplomacy fails, and a state considers its vital interest at stake, then only at that point will it go to war. Russia has decided to do so in a bid to expand its borders and also prevent missiles from a hostile military alliance being stationed on its frontier, just as America was prepared to do in 1962 for the same sort of reason. Under capitalism, and as long as it lasts, there will always be the threat of a war and, even in the absence of a war, a colossal waste of resources on maintaining a ‘big stick’ to wave about in negotiations over the inevitable conflicts of economic interest that are built into the global capitalist system.

Capitalism breeds war. The Labour Party supports capitalism, so it is logical that it supports wars and the policy of the big stick. Socialists, on the other hand, have always opposed capitalism and the wars it generates. And, of course, the Labour Party.