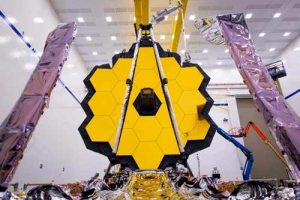 A spectrometer is haunting the universe, the spectrometer of the James Webb Space Telescope. Or it will be if, at the time of writing, the Ariane 5 launch goes ahead on 22 December as planned and doesn’t face yet another delay. The spectrometer will measure the differing light signatures of the various elements making up planets and stars, and space boffins are hyperbolic at the prospects for new science that this might bring. For one thing the JWST is much bigger than the Hubble telescope, about the size of a tennis court, with a gold-covered reflector the height of a 4-storey house (it had to be shipped in secret to South America because of the risk of pirates). The large size means it can see what Hubble can’t see – a lot further into space and so further back in time, almost to the doorstep of the big bang. It’s also an infra-red telescope, because stars are more red-shifted with distance, and spectral patterns show up better in IR than in the visible spectrum. Among other things, scientists are hoping to see very early stars made of nothing but the three lightest elements, hydrogen, helium and lithium. If they see any heavier elements, they’ll know their cosmology needs a rewrite.

What is all this is costing and who’s paying for it? The cost is around $10 billion, stumped up mostly by the US government but with a whip-round from others including the UK and Canada. This is fairly small potatoes to the US, whose 2019 military budget was $686 billion, but still, a capitalist beancounter might ask, why pay good money to discover something which can’t possibly be of any practical use to anyone? Well, government-funded science is always a gamble. They might get nothing out of it, or they might get the next computer revolution. Or just the next Velcro. Either way, you’ve got to be in it to win it, and the Chinese and Russians are in it, so other governments are too.

There’s another reason to invest in big-ass telescopes, of which several more are due in the next few years (bit.ly/3dKcpV3). That is, finding Earth-like planets in other solar systems, since there aren’t any more in ours. Around 4,000 exoplanets have been identified so far, by measuring the relative dimming of stars as large bodies pass in front of them, but this is very low-res and can only detect Jupiter-sized gas giants, which we couldn’t live on, or huge rocky super-Earths, whose gravity would crush us. The JWST should be able to spot Earth-sized planets, particularly those in the relative Goldilocks zones around their stars, by seeing them directly. Spectroscopy will determine if they are Earth-like, ie, with the right life-sustaining mix of elements. If life as we understand it exists anywhere out there, these planets would be the best places to look.

Could we ever live on any of these planets though? The question becomes more compelling the worse the climate situation on Earth gets. But the vastness of space would seem to prohibit that idea. Apollo 11 travelled at a speed of 25,000 miles per hour. The Parker Solar Probe, launched in 2018, is expected to reach 430,000 mph by 2025. That’s over 250 times the speed of an average bullet, but even at that impressive lick, it would still take over 6,000 years to reach Alpha Centauri, the nearest star system.

Not that this has prevented people discussing the possibility. If you loaded up a rocket with 50 breeding pairs of humans (this minimum viable number has been exhaustively calculated, you’ll be pleased to learn – see bit.ly/30isMVK) who didn’t object to themselves and 240 generations of their descendents living and dying in a tin box in space, and if nothing went wrong technically or because they went stir-crazy, they might make it. But the chances are, they would get there and discover that humans were already there, in fact had been there for thousands of years (bit.ly/3pT2jH0). How could that be? Because those left behind on Earth, in the intervening millennia, might have come up with a much faster way to travel, thus passing the first rocket on the way and getting there first, which would defeat the whole purpose of such an unthinkable sacrifice. Given this possibility, at what point would anyone volunteer to get on the first rocket? This is known as the Wait Calculation problem, which concludes that there is no optimal time to volunteer, unless humans somehow manage to invent a Star Trek-like warp drive that can reduce the trip to days or weeks.

Believe it or not, two papers were published last year showing that a warp drive was theoretically possible, ie, travelling faster than light without breaking the laws of physics. Essentially you don’t travel faster than normal, what you do is warp or squash the space-time in front of you so there’s less of it to cross (bit.ly/3DMLaUA). The earliest suggested warp drive technique involved using never-observed negative mass and negative energy equivalent to the mass of the universe. The new papers show how it could be done without either of these.

These are mathematical models only though, so don’t hold your breath. Or maybe do, in cryogenic suspension, with your body and brain embalmed with antifreeze in a container of liquid nitrogen. It might sound unappealing but people are already doing this. For instance, for $28,000 you can have yourself preserved at the Cryonics Institute in Michigan, which already has 137 ‘residents’ (including pets) and 1,273 more on the pending bucket list. It’s cheaper if you only want to preserve your head, by the way. Meanwhile in Colorado a local man is frozen in a shed and the locals supply 700 kg of dry ice a month to keep him that way, and they even hold a Frozen Dead Guy festival every March (bit.ly/3yi7oMQ). Cryogenics might be a way to get to the stars, except that nobody has tried to wake a human up again so nobody knows if it really works.

Would people in socialism be that bothered about visiting or colonising other star systems? Impossible to say. We might regard it as humanity’s ultimate endeavour and a fitting testament to our limitless curiosity. Or we might just see it as a sensible hedge against future extinction when the sun turns red and fills the sky. At first though, we’ll probably be too busy fixing the damage that capitalism has done to the planet. Which brings the question back down to Earth. Whatever else becomes possible later, for now, abolishing capitalism is the frontier we need to cross.