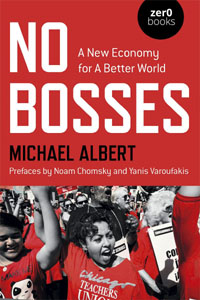 Another book by Michael Albert arguing for his blueprint for a future economic and social system that he calls ‘participatory economics’, or ‘parecon’. He presents it as an alternative buying-and-selling economy both to one where wages and prices are determined by the market and to one where they are fixed by the government. His blueprint involves your work and income being decided by your work colleagues and what you consume by your neighbours. It also involves numerous meetings and votes to decide what should be produced.

Yanis Varoufakis, in a politely critical preface, makes the point that it could turn out to be a dystopia rather than a utopia:

‘While I see how Michael’s proposed organisation would rid workers of individual bosses and market pressures, I fear they may end up being bossed around by tyrannical majorities.’

Yaroufakis is writing from the position of someone who thinks that giving the market a role would allow people a greater freedom of choice. We don’t agree with that of course but would make the same criticism on the ground that post-scarcity conditions make free access possible along with the application of the principle ‘from each according to their ability, to each according to their needs’.

Albert, however, insists that consumption should be linked to the ‘duration, intensity and onerousness’ of the work an individual does and is implacably opposed to ‘from each to each,’ devoting four pages to criticising it, or rather a caricature of it. Basically, he thinks that it would lead to people not working hard enough and/or consuming too much. He calls it ‘The Anarchist Objection’ and, indeed, Kropotkin and Alexander Berkman who he cites as among those who have influenced his blueprint, could both have answered his arguments. It is not just an objection made by some anarchists but also by us, as he knows since he has debated with us, both in person and in the columns of the Socialist Standard (April 2006).

There is nothing new in the book except for Varoufakis’s point. 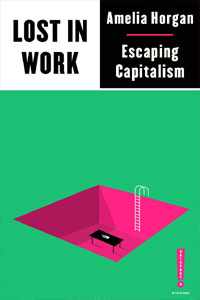 As the author points out, Marx’s critique of capitalism extended to work, which was more than just dangerous and badly-paid. In Horgan’s description of his views, ‘under capitalism, work takes something human and turns it into something monstrous’. Her book provides a convincing account of many aspects of employment under capitalism, but sadly goes little further than that.

One example of the way that employers exercise power is seen in car washes. The mechanical ones involved machines that were expensive to purchase and maintain, and most have now been replaced by hand car washes, where the pay is abysmal and many workers are victims of human trafficking. More generally, the number of supposedly fulfilling and secure jobs is dwindling, as work becomes polarised, with a minority of relatively well-paid occupations and a mass of poorly-paid ones, often part-time. As an illustration of the extent of the resulting poverty, one third of households would be unable to pay the next month’s rent if the main earner lost their job, and unemployment benefits are much reduced. According to one survey, a quarter of UK adults are forced to have a second job.

Capitalist work can have a seriously detrimental effect on worker’s health, especially workload pressure. Burnout involves energy depletion, feelings of negativity and a sense of ineffectiveness, and is, according to the WHO, an ‘occupational phenomenon’. Lack of control over a person’s work or their use of their time is a big problem, especially for the lower-paid or those in more mundane roles. One study found that the significant difference in death rates among civil servants depended on whether they were of junior or senior rank.

Even under capitalism, not all work is employment. The work of social reproduction, for instance, has historically been primarily carried out by women. Things have changed somewhat over time, but in a 2005 survey in the UK, women spent more than twice as much time on housework as men. Migrant workers are often employed at very low rates as domestic cleaners or nannies. Some social reproduction work has in effect been outsourced to takeaways, but much work (care for the elderly, for instance) is still usually seen as ‘women’s work’.

As for escaping capitalism, as mentioned in the subtitle, there is virtually nothing on this. Horgan sees a ‘transformation in ownership’ (worker-owned businesses, presumably) as the heart of the solution, linked to a shorter working week, universal basic income and so on. But doing away with the whole concept of employment, wage labour and exploitation for the sake of profit gets no mention here. 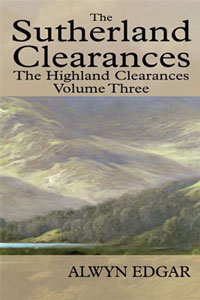 Before the Rebellion of Prince Charles in 1745, each Highland clan owned its own land. No one else, including the Government in Edinburgh, had the power to deprive them of it. (Travellers saw that in the mountains every crag was a new fortress for men defending their own country.) But the Highland Jacobite rebels having been defeated at Culloden and scattered, and the Lowland Government in Edinburgh now being much stronger since the Union with England in 1707, the British authorities decided to incorporate the Highlands into Great Britain in fact, as well as in theory. The anglophone legal system was successfully imposed, and the clan chiefs were made into landlords, owning all the land which had once belonged to their clans. Scots law now gave each chief-landlord the right (for any reason or no reason) to turn his entire clan out of their homes and farms, and keep the whole clan land as his private back garden, if he wanted. So when the new landlords realised that big grazing farms, for cattle or sheep, would make a lot of money, the clearances started. Well-to-do Highlanders, Lowlanders, even a few Englishmen, rented the clan lands; the chiefs evicted their folk; and the chief/landlord found his income shooting up over the years to five times or fifteen times what it had been (and there was no income tax!). Many of the evicted Highlanders were given an acre or two of worthless, barren land, and told to make it fertile: and when by donkey-work the crofters were able to grow a few potatoes, they had to pay rent for the value they themselves had created. Others – either immediately or after years of rack-rented drudgery on the croft – went to the Lowland factories, or abandoned Scotland entirely for arduous pioneering lives in North America (those who survived the journey).

The Earls of Sutherland were chiefs of the Sutherland clan, Murrays, MacKays, Sutherlands and others. Adam Gordon married a daughter of the Earl of Sutherland about 1500, and managed to cheat the rest of the family out of their land-charters. After that the Earls of Sutherland were Gordons. The 18th earl died in 1766 leaving a year-old daughter, Elizabeth Gordon, to succeed him. She inherited nearly two-thirds of the county of Sutherland, over 1250 square miles, an estate about the size of Gloucestershire. The long wars with France between 1793 and 1815 meant there was a desperate need of soldiers, such as the Sutherland small tenants could provide: but (despite being married to one of the richest men in England, the Marquis of Stafford) she wanted the much higher rents which big sheep farms would supply. (You can never have too much money.) She was indifferent to the fate of the small tenants – ‘good many of them’, would ‘inevitably be tossed out’, she wrote; they would be ‘driven from their present dwellings by the sheep farms’. She cleared her estate between 1807 and 1821, greatly increasing her rents. She and her husband became the Duke and Duchess of Sutherland.

The second greatest Sutherland landowner was Lord Reay, the chief of the Reay MacKay clan. Reay cleared his estate even before Elizabeth Gordon, beginning about 1800. (Thirteen smaller landlords owned the rest of the county, and rivalled the countess and Lord Reay with their own clearances.) Reay belonged to a London firm which provided finance to slave-traders, and spent most of his time in gambling dens and brothels. Having wasted vast amounts of money, he sold his estate to the Sutherlands in 1830, and bought a slave plantation in the West Indies. When the slaves were freed in 1833, like the other slave-owners he was compensated. (The slaves weren’t.) – from the blurb.

Interview with the author here: https://youtu.be/CrhSuf9TFl0