Sharing, But Not Alike

Share the World’s Resources is an interesting-sounding name for an organisation. Their website is sharing.org, and it contains a lot of material, reports, blogs, and so on. However, what they have in mind is not a society where people in reality share the Earth. Let’s look first at the document A Primer on Global Economic Sharing, dating from 2014.

This begins positively, by pointing out that people are not selfish by nature and that humans are predisposed to co-operate and share. Increasing use is now being made of collaborative consumption, which is based on sharing rather than ownership, whether of cars or office space. Sharing cannot be national, but must take place on a planetary scale, and bridging the gap between rich and poor countries is advocated. The UN (once it has been made properly democratic) is seen as a major means for introducing the supposed world of sharing. The failure to share is responsible for conflict over land and other resources. Either the ‘environmental commons’ should be shared more equitably, or there will be increased competition for resources, accelerated climate change, and maybe even another world war. 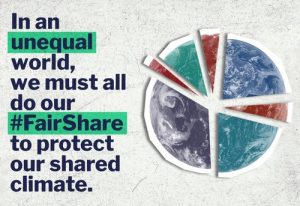 Further, the report goes on, action absolutely needs to be taken, as each day forty thousand people are likely to die from ‘avoidable poverty-related causes’. In a world of massive inequalities of wealth and a barely credible extent of poverty, there is a need for a ‘fairer distribution of wealth, power and resources on a worldwide basis’. More than enough food is produced to meet the needs of every human being, yet famines still occur. This is because food is grown for profit, not human need. Natural resources are ‘part of our shared commons’, and what is needed is neither private nor state ownership but a form of management ‘based on non-ownership and trusteeship’. The ‘global public’ must participate in a reform that ‘extends beyond national borders’.

Yet the report undermines some of the reasonable claims made by lamenting that no ‘global community of nations’ has been created, which implies that a world divided into countries is still envisaged, as does the reliance on the UN. Also, the response to the current food situation is a call for ‘fairer regional and global trade arrangements’, and a demand that governments accept responsibility for guaranteeing access to food for all. Market mechanisms are supposedly rejected, along with charitable giving, to be replaced in part by redistributive government policies. Sadly, all this shows little awareness of the real aims and purposes of governments, which are to defend the interests of the rich and powerful.

This report, then, is a mixture of some good points in criticising the current world system and a very unrealistic view of the future, largely owing to the fact that STWR does not truly reject the present system, only its most obviously unacceptable consequences. Sharing is fine, but a world still divided into countries cannot be genuinely based on sharing, nor can one which retains trade and money.

There is only one passing reference to capitalism in this report, but for more on this we can turn to another STWR document, Heralding Article 25: a People’s Strategy for World Transformation, by Mohammed Sofiane Mesbahi, the organisation’s founder. The reference in the title is to article 25 of the UN’s Universal Declaration of Human Rights, which states that everyone has a right to an adequate standard of living, an idea that is said to be meaningful even to those who have never heard the word ‘capitalism’. But what is said there about capitalism is, to put it mildly, bizarre. It is, the reader is told, a divisive term, and there is really no such entity, ‘only people in the world who hide behind ideas or abuse principles for their own devious intentions.’ The principle of capitalism, Mesbahi argues, is not synonymous with inequality, for what we see around us is not capitalism but the consequences of some people’s motivations. Communism, too, has been corrupted by authoritarian regimes, thus wrongly equating communism/socialism with the state capitalist Bolshevik systems. It is not principles that are to blame for the world’s problems, but ‘man himself’.

Mesbahi also argues that we should look at the ideas underlying different social systems ‘with a more spiritual understanding’. He rejects the notion of a revolution, and, in order to put less emphasis on antagonisms, prefers to say ‘not with’ rather than ‘against’ (but what difference would that make?). Do not be conditioned by ‘isms and ideology’, instead choose a ‘spiritual revolution’ (so he is not against all revolutions).

It is hard to make sense of something expressed in such woolly terms, let alone discuss and evaluate it. Being charitable, we might think that his spiritual revolution could mean a change in people’s ideas, akin to a growth in socialist consciousness among workers. But there is nothing here about what the supposed future society would look like in concrete terms, nor any conception of just how to get there other than holding demonstrations in support of article 25. This would achieve precisely nothing, and the vaguely described world of sharing that STWR advocate does not begin to address the real problems or to show how they can be overcome. The organisation is asking some of the right questions, but providing little if anything by way of viable answers.