All the talk of COP26 has tended to obscure other aspects of capitalism’s dark agenda that lurk below the surface, waiting to bite someone’s legs off. One such agenda burst to the surface last month with the gung-ho expedition of a British Carrier Strike Force through the South China Sea combined with the announcement of a new military (Aukus) pact between Britain, the US and Australia, designed to make Australia the nuclear submarine policeman in the Indo-Pacific and contain Chinese expansionism. Suddenly, instead of global warming, the papers were full of breathless talk about global war. 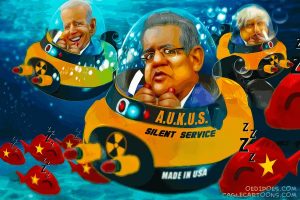 China, on its way to overtaking the US as the world’s premier superpower, economically if not yet militarily, is acting as if it owns that particular ocean and everything in it. Increasingly dodgy activities, including creating artificial island air bases and mounting amphibious landings that look like practice for invading Taiwan, are causing much alarm to regional powers and indeed anyone who wants to use that ocean as a shipping route (ie. everybody).

America’s motivation is obvious. Australia has just fallen out with China, it’s biggest trading partner, so will be happy to accept US/UK weapons tech as leverage. The UK meanwhile, having just bought two carriers it couldn’t afford (with a paltry 8 F-35 fighters on board which had to be supplemented by a further 10 US planes just so it didn’t look ridiculous), is desperate to preserve the illusion that it’s still a world player, with Boris Johnson wittering about ‘Global Britain’ to distract the voters from ‘Brexit Balls-Up’.

Meanwhile New Zealand, with its lovable mumsy Prime Minister Jacinda Ardern, is caught on the prongs of a dilemma, being in the ‘Five Eyes’ espionage ring with Australia, the UK, US and Canada, but simultaneously also having China as its biggest trading partner. It would be terrible for Jacinda’s image to be embroiled in a regional macho pissing contest, but she can’t stay out of the fray. She’s felt obliged to announce a ban on Australian nuclear subs in NZ waters, in line with existing policy on nukes, but must be squirming about the fact that New Zealand is also the administrator of the Comprehensive and Progressive Agreement for Trans-Pacific Partnership trade pact (CPTPP). This pact was set up by the US expressly to restrict China’s trade influence, and includes Australia, Canada, Japan and Chile. But then Trump pulled the US out, and the UK applied to join. Now China has applied to join as well!

WTF? you might say. Indeed. And China is also in the Regional Comprehensive Economic Partnership (RCEP) which has 14 member states including South Korea, Japan and, er, Australia and New Zealand.

Funny that Britain fell over itself to exit a European trading bloc, supposedly in the interest of ‘free trade’, while elsewhere countries including the UK are falling over themselves to join trading blocs, even when they seem to be in competition with each other.

We offer no brilliant analysis of this regional game-play, except to observe that capitalist states circle each other like sharks sniffing for blood, and if they find any, it’ll no doubt be workers who end up as the fish food.