Blame the old for being alive

Society’s treatment of many old people is shameful. Shut away in institutions, out of sight and out of mind, treated as expendable and collateral damage. The claim that we live in a civilised society is challenged by the miserable manner present-day society looks after old people. Too often the attitude is that ‘senior citizens’ are already living on borrowed time as a result of modern medical skills that extend their lives and therefore they should not receive any priority to prolong life.

The callous way that capitalism has developed ‘care’ of the elderly is shown in the manner where all of those with poor immune systems are placed together in one institution so when an infection strikes, it spreads through the unfortunate residents. As with dementia, take patients away from the one place they know and feel comfortable in, and place them with similarly confused people, in unfamiliar surroundings and then wonder why the dementia then deteriorates.

The number of cases of abuse is projected to increase of the aged whose needs may not be fully met due to lack of resources and insufficiently trained staff. The WHO reports that globally around 1 in 6 people 60 years and older experienced some form of abuse in community settings during the past year with levels of abuse high in nursing homes and long-term care facilities, with 2 in 3 staff reporting that they have committed abuse in the past year. 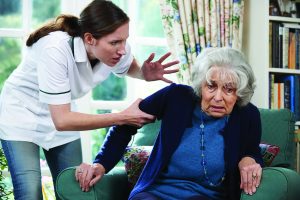 As many as one in five people in the UK over the age of 65 have been abused. The charity Hourglass, in a survey it conducted, said that more than a third of people did not believe that ‘inappropriate sexual acts directed at older people’ counted as abuse. 30 percent did not view ‘pushing, hitting, or beating an older person’ as abuse. 32 percent did not believe that ‘taking precious items from an older relative’s home without asking’ constituted abuse.

And not just the UK. An Australian Royal Commission has uncovered widespread mistreatment. Overall, investigators estimated that over 32,000 assaults – physical, sexual and emotional had occurred in a year in such homes. The abuse was perpetrated by carers as well as other residents. They said about 2,520 sexual assaults had happened in residential nursing homes in 2018-2019, an estimated 50 sexual assaults occur each week. ‘Unlawful sexual conduct’ is believed to have affected 13-18 percent of aged care residents.

The pandemic has exacerbated problems. Worldwide, the elderly in care homes were initially designated as low priority but it was the continuation of a trend that began with care becoming a for-profit industry.

In the last week of November, Covid-19 has claimed the lives of more than 100,000 people who lived and worked in long-term care facilities in the United States. According to public health expert Michael Barnett, one in 13 have now died as a result of Covid-19. So far, at least 75 percent of Australia’s coronavirus deaths have been aged care residents.

When the Covid-19 pandemic arrived, Julio Croda, from Brazil’s Department Of Immunisation And Transmissible Diseases, said he experienced a lack of urgency from the government when his department predicted that the elderly would bear the brunt of the coronavirus and would be more likely to die from the disease. Solange Vieira, who helped restructure Brazil’s pension system, said the quiet bit out aloud, ‘It’s good that deaths are concentrated among the old. That will improve our economic performance as it will reduce our pension deficit.’ In Britain too the pandemic has been an ill wind, with the Office for Budget Responsibility calculating that:

‘The Government will save over £600m in state pension payments this year following a steep rise in excess deaths among the elderly, according to the budget watchdog’ (Daily Telegraph, 25 November).

Even in ‘progressive’ Sweden, its policy of promoting herd immunity led to older people being acceptable sacrifices. The ‘herd’ will survive, but what about the weaker and frail members of society? Anders Tegnell, the chief epidemiologist at Sweden’s Public Health Agency, answered, ‘Unfortunately the mortality rate is high due to the introduction [of the virus] in elderly care homes.’

Yet long before the present pandemic, back in 2013 the then Japanese finance minister, Taro Aso, at a meeting discussing social security reforms said that the elderly should be enabled to ‘hurry up and die’ to relieve pressure on the state to pay for their care (Guardian, 22 January 2013).

Society traditionally emphasised respect towards the elderly but as families and communities became increasingly atomised, abuse and abandonment has increased and our elders have been more and more stripped of their dignity. Is it really an exaggeration to claim that in today’s world old people are seen as disposable, to be discarded when the need arises?

Providing for the infirm and elderly is a social responsibility which all the able-bodied members of working age should share in equally. ‘From each according to their ability, to each according to their needs’, no matter their age. A socialist world will not treat old folk like machines that have been rendered obsolete and fit only for the scrap heap. Only a socialist society is capable of supporting the increasing longevity of its people and honouring and respecting our aged fellow-workers.