US elections: The lesser-evil fallacy

As the American presidential election draws closer, progressives such as Noam Chomsky are making their message to vote Biden very much more vocal, declaring Trump is so demented and deranged that a president already displaying symptoms of senility and dementia is preferable and so working people must ignore Biden’s ignominious past record. Unlike 2016, there is now no debate whatsoever about who the lesser evil is. The claim is not that the Republican Party and the Democratic Party has actually converged into one on many issues (even if not identical) and that they share so many policies that the choice is between Tweedledum and Tweedledumber.

Our principle is to abstain from voting for either evil and offer neither a mandate to rule. Working people are required to register their rejection of capitalist candidates. Both Trump and Biden are staunch champions of the capitalist system and apologists for Wall Street and the Pentagon. November’s election is a contest about who will preside over the ‘executive committee of the ruling class’.

The lesser-evil argument is rampant these days. Biden is presented as an ally of African-Americans and other minorities. Trump is depicted as the authoritarian autocrat, suppressing liberties and repressing resistance. The working class should not support either of the presidential candidates this year, as neither represents the interests of the working people of the United States. Both would continue the assault on the living standards of working people, to boost corporate profits by cutting social services and take back reforms won through hard struggle over the past years. The working class should reject the ‘Big Business’ candidates and their shared programs of economic austerity and war preparations. There is no such thing as a meaningful choice when it is to pick between cholera and typhoid.

The lesser-evil fallacy serves only to keep the voter chained to the duopoly political system and its two parties. Voting in this election will only hold back the process of forging an independent workers’ movement. Workers have had the lesser-evil strategy for many decades and bitter experience indicates that it hasn’t worked, and even less chance than ever will it succeed today.

Biden is not opposed to capitalism but out to save capitalism from Trump. His campaign is not based in the working class or on any working-class struggle but upon an imaginary gentler, kinder capitalism. As a politician Biden adopted blatant anti-working-class policies that should shame and condemn any ‘socialist’ endorsing him. Biden may not be as openly racist as Trump yet he has a history of flirting with segregationists and he has shared with the right wing similar positions on immigration, law and order and foreign policy.

Not voting in the presidential election is not a matter of principle for socialists. The working class can use the electoral process as part of its struggle for socialism to assume political power and capture the institutional machinery of the state. The Socialist Party holds that there is nothing more dangerous for our fellow-workers than endorsing a class enemy. As genuine socialists we want the working class to become conscious of itself and realise its power to change society. It is the working class versus the capitalist class. Socialism cannot be achieved by electing capitalist candidates but rather by fighting capitalists collectively.

Socialism seeks to eradicate the basic causes for war, poverty and environmental damage which it knows are the products of capitalism. No matter the outcome of the election, no matter who wins, the continued existence of capitalism is assured, none of the consequences of the profit system will be abolished. The Socialist Party stands for socialism now and not later through any electoral bargaining with our class foe. The purpose of the Socialist Party is to promote socialist consciousness and organisation and that will not be accomplished by entering into alliances with any capitalist politician. Biden is not a lesser evil, despite the pronouncements of liberals such as Chomsky and others. Any person who does not tell this truth isn’t worthy of the name of socialist. There is only one party in the USA that expresses the interests of our American fellow-workers and that is the World Socialist Party of the United States. 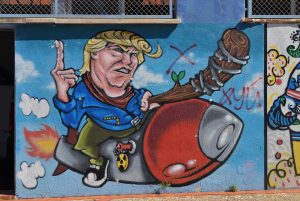 One Reply to “US elections: The lesser-evil fallacy”