One world or many states?

We have been asked for our view on the movement for West Papua to gain independence from Indonesia. Here is our reply.

The Socialist Party and wider World Socialist Movement in various locations throughout the world, consists of individuals who have come together for one purpose: to assist in the urgent task of establishing world-wide socialism. We define socialism as a society in which all the resources of the world are used in common to meet all the needs of all the people of the world, without any distinction whatsoever, including the distinction of so-called national identity. It follows, then, that we do not concern ourselves with either the destruction or the creation of national or territorial borders within capitalism. This is a policy that we have upheld from our formation in 1904. During that time, we have, of course, been admonished to recognise the seemingly vital need to defend this national group against that one; to support the imposition of this territorial border or the dissolution of that one; to denounce this act of nationalist aggression or to excuse that one. Our reply has always been that while capitalism exists, such disputes and conflagrations are unending and it is not the role of socialists to act as adjudicators over the rights and wrongs of conflicts that are endemic to capitalism.

To talk of self-determination is to play with words. Past circumstances notwithstanding, the world is today so integrated that no country can be genuinely independent in how it acts. Usually, it can’t even independently decide how it behaves within its own ‘borders’, for fear of criticism or censure from international bodies, or, more usually, powerful outside interests.

World capitalism always has been, is now, and always will be a quagmire of different competing interests along national, religious and ethnic lines. But all such differences are artificially created by artificial scarcity. Only world socialism can finally put an end to this fight for resources – a sordid fight that, in order to acquire a semblance of decency, hoists coloured rags on poles and conscripts evolved human morals and ethics into ‘national’ armies and risibly ordained ‘national’ interests.

Socialists don’t deny the value of human culture, of course not. What we abhor and oppose is the culture of all the people of the world – which ‘belongs’ to and should be accessible to us all – being turned into nothing more than ruses to corral the working class of the world behind artificial borders, the real and sole purpose of which is to enlist us into fighting for and protecting world markets for ‘us’ and not ‘them’.

Historically, West Papua is little different from any of the countless other regions that have been colonised and invaded over centuries. Today, a population of less than a million in West Papua contains 6 ‘ethnic’ groups, practises 5 religions and speaks a variety of languages. Yet, the twin issues of personal poverty and the human rights of the individual are the main concerns in West Papua, just as they are in West Ham in London or West Bronx in New York. Why should the members of the human family who happen to be born in the particular part of the world named (by ‘foreigners ‘) West Papua limit their horizons, in this day and age, to West Papua? Why shouldn’t an inhabitant of West Papua not see themselves as a citizen of the world, free to live wherever they choose on the planet? Why shouldn’t anyone have the right to go and live in West Papua if they so desire?

Capitalism, of course, can never allow for such a world at peace with itself, of personal universal rights and personal self-determination – the only form of genuine self-determination and the only form that socialists care a hoot for. Only in capitalism is it necessary to construct borders around adesignated area arbitrarily created by history, to keep certain people in and keep other people out. Socialism, the only universal solution to ‘borders’ will require no such artificial distinctions between the world’s people and will have no borders. And since this is the goal of socialists, why would we do something as illogical as interrupt or postpone our endeavours to create a borderless world in order to advocate new borders that we aim to abolish? 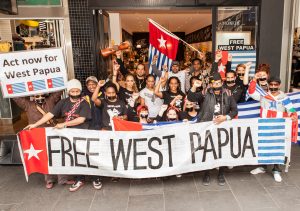