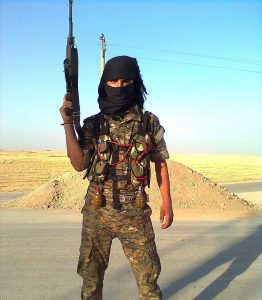 Last month’s Socialist Standard focused upon Turkey’s policy to grab a share of the Eastern Mediterranean gas fields. Turkey, once called the ‘sick man of Europe’, is endeavouring to confirm its role as a regional power. In the chaos of Syria, Turkey has been an active participant.

Recently there have been incidents where Turkish troops suffered numerous casualties caused by the Syrian government, which led to Turkey retaliating.

It was clear that working people in Syria started the uprising against the Assad regime because of the lack of freedom and social justice, the prevailing corruption and discrimination. Life for the majority was dismal with low incomes, a rising cost of living, homelessness, and unemployment, which all served to spark Syria’s ‘Arab Spring’. However, foreign powers and various Islamic jihadists became involved and changed the direction of the people’s uprising. The popular protests were diverted by neighbouring rulers into a proxy war between Saudi Arabia, the Gulf States and Turkey with the support of the US and Western nations on one side with Assad’s government, Iran and Russia on the other. The Syrian civil war proceeded to develop into a series of sieges.

Way back at the beginning of Syria’s civil war, Turkish authorities facilitated the involvement of the Islamists by permitting the infiltration of jihadists into Syria via its borders. It also allowed commandeered oil that financed ISIS/ISIL operations to be transported through Turkey to be sold on the world market.

As the Syrian situation escalated it resulted in the mass movement of refugees, with Turkey hosting millions of displaced Syrians fleeing for safety. Turkey is also the route for refugees to reach Europe and it entered into an agreement with the EU to stem the flow of refugees. These desperate and vulnerable people have now become political pawns used by Turkey with Greece now ignoring international law and slamming the doors shut in the faces of refugees.

At first the Kurdish independence movement tried a third way in that it would side neither with the regime nor with the opposition. It would defend itself, but it would not wage war. Starting in mid-2012, various places in the Kurdish areas were one by one freed from Assad control. When Kurdish separatists created an autonomous region, Rojava, this was seen as a direct threat to the rule of Turkey and it led to a direct invasion of Syria to neutralise the PYG/PKK (Kurdish People’s Protection Units/Kurdistan Workers’ Party). It meant a military stand-off with the US who inserted its forces within the Kurds’ defences to assist the Kurds in combating the Islamist terrorists. This ended when Trump re-deployed US forces to secure Syria’s oil fields and it left Turkey along with Syrian mercenaries with a free rein to launch an assault against the Kurds who quickly then looked to the Syrian government and its Russian mercenaries for protection.

Added to this complex situation is the current Syrian regime’s advance to retake the last rebel-held territory in the country, the province of Idlib which is under the control of Hayat Tahrir al-Sham, a former al-Qaeda affiliate. Turkey is backing these anti-Assad rebels. This has brought Syria and Turkey into direct conflict and created a possible confrontation with Russia. If the Syrian government is victorious, there will be a new flight of refugees fleeing towards the safety of Turkey increasing the refugee burden Turkey already carries.

But Turkish military expansionism has not stopped the UK from selling Turkey weaponry. The UK has licensed sales of military equipment to Turkey worth more than £1bn since 2013, according to the Campaign Against the Arms Trade, principally aircraft, helicopters, drones, grenades, small arms and ammunition. Leading armament manufacturers BAE Systems and TAI were awarded with an Open General Export Licence that makes the flow of weapons to Turkey easier. It wasn’t until October 2019 that the UK government halted new sales of weapons to Turkey while still honouring existing arms contracts.

In fact the world’s arms traders – the ‘merchants of death’ – are literally making a killing out of this war, with those in Turkey and Russia being able to test their weapons under battlefield conditions.