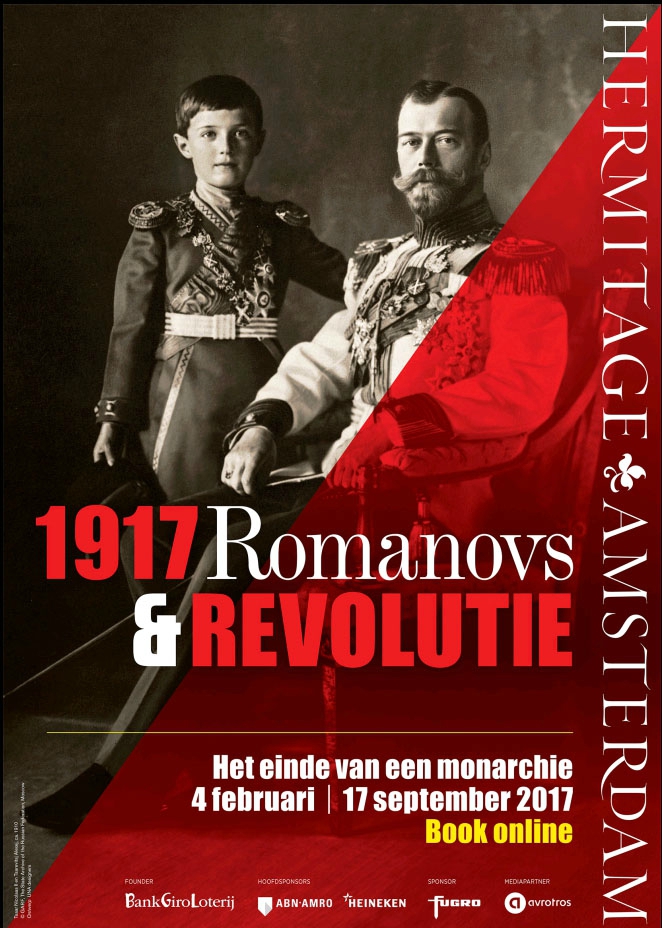 Hermitage Amsterdam is a branch of the massive State Hermitage Museum in St Petersburg, and mainly displays works from its parent museum. This centenary year sees an exhibition ‘1917: Romanovs and Revolution’, which continues till mid-September. As might be expected, there is a lot of emphasis on Tsar Nicholas II, his family and his own political and military weaknesses and miscalculations. There are display panels, newsreels, paintings, original documents and historic objects (such as one of the swords used to execute the royal family).

For the rich and powerful, St Petersburg in the nineteenth century was a luxurious city, with shopping arcades and Art Nouveau-influenced designs, so it was culturally part of Europe. But the rest of Russia, with its vast impoverished peasant population, was completely different. The Russian press was tightly censored and it was left to poets and novelists to express new social and political ideas, often at risk to themselves; Dostoyevsky spent ten years in Siberia from 1849.

Newspapers were forbidden to mention the deaths of hundreds of people in a crowd disturbance and stampede at Khodynka a few days after the Tsar’s coronation in 1896. Over a hundred demonstrators were shot on Bloody Sunday in 1905; the Tsar and government responded with an anti-semitic campaign. The First World War saw the Winter Palace used as a military hospital; and the Fabergé company shifted from making expensive jewellery to manufacturing army and medical equipment for the war.

The February Revolution was initially sparked by protests on International Women’s Day, and led fairly quickly to the Tsar’s abdication, after which his family were imprisoned and eventually executed in July 1918; recent research has identified bodies discovered in the area as those of the Tsar and his family. The exhibition has relatively little material on the Bolsheviks and their takeover of power. There is a reference to ‘Marxism-Leninism’ and an astonishing claim that Lenin’s ideas were ‘far more radical’ than those of Marx, but there is no explanation of what this is supposed to mean, let alone any justification.

Also in Amsterdam, the Nieuwe Kerk was housing the 2017 World Press Photo exhibition, containing some unforgettable and tragic images, mostly of war and refugees. It closed on 9 July, but it will be displayed in many other locations, including the Scottish Parliament building in Edinburgh from 4 to 26 August. Or look at www.worldpressphoto.org to see many of the photos.