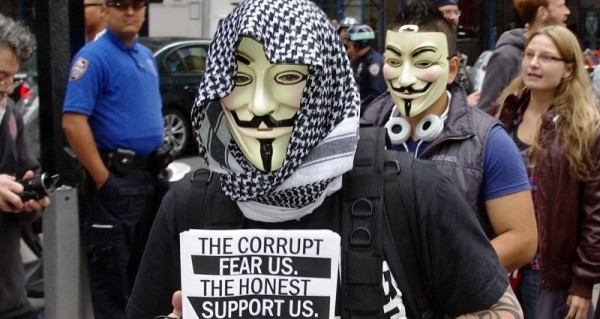 Those sinister cowled crusaders of the hacker group Anonymous, who have in the past tilted at the windmills of the Vatican and the Turkish state, recently decided to declare cyber-war on Isis. Whether Isis felt any frisson of alarm at this development has not been reported, but you’ve got to love the showboating chutzpah of pimply computer geeks in Guy Fawkes masks who think they can take on real murdering thugs in ski masks. Did we say Marvel comics? More like the IT Crowd meets the Sopranos. Fingers crossed the geeks don’t come a cropper. If the thugs ever find out who they are, there’ll be more than connections getting cut off.

Not content with waging holy jihad, now Anonymous have also declared war on Donald Trump. Now, as much as anyone else we loathe that ruddy, right-wing billionaire bigot, who like some cartoon antichrist rampages across the headlines with the reckless arrogance of the untouchably rich. He really is Marvel material – Spiderman’s newspaper boss J Jonah Jameson brought hideously to life. Nothing would be too bad for that man. We hope that acute poverty descends and crushes him like a comet from heaven. We hope he puts all his cash into an Armenian Ponzi scheme. We hope his balls drop off.

But still, and for the sake of balance, there is something we need to ask the keyboard bandits of Anonymous – something quite important which they apparently are not asking themselves.

Just who do they think they are?

The thing is, nobody asked them to be vigilante heroes. Nobody elected them. They don’t have a mandate. They don’t have the right to make unilateral decisions about who the world’s renegades, rats and scumbags are and then declare war on them on our collective behalf. And if they are not doing it on our collective behalf, well then they are renegades themselves, which makes them part of the problem, not part of the solution.

Because the solution has to be democratic action, open, accountable, informed, discussed, participated in, agreed upon. Whatever Anonymous are up to, it isn’t this. However good these ‘good guys’ think they are – however good we think they are – when they act as if democracy doesn’t matter that’s the same as perverting it. When you hack a computer system – just because you can – you are not asking, you are dictating. The problem with a world that runs on computers is that there are suddenly a lot of people who, with a bit of tech knowledge, could decide to dictate from their bedrooms. And seeing that the democratic process seems able to trump forth a bad smell like Donald may make these bedroom activists even less likely to believe in democratic processes and more likely to play politics via the virus and the DOS attack. And that way, as they say, madness lies.

It’s not just the hackers. Last month we saw Tim Cook’s Apple Corporation stick two fingers up at the FBI who, as you will recall, wanted Apple to break its own phone security protocols so that the Feds could read the private messages of two Islamic assassins. Apple made huge play of civil liberties issues, of their ‘right’ not to be coerced by federal government, and of their ‘responsibility’ to their customers. Rather surprisingly, or perhaps not, the press sided with Apple. In fact Apple felt entitled to take the high moral ground as defenders of ‘liberty’ by calling the FBI request a ‘stretch’ of the law that would have appalled America’s founding fathers .

That’s pretty damn rich coming from a capitalist corporation run by unelected tycoons whose own workers certainly don’t have a company vote and whose future intentions are about as far from democratic liberalism as it’s possible to get. Just ask the Chinese Apple workers throwing themselves off rooftops.

Anyone would think the corporations really run capitalism and politicians are nothing but dumb finger-puppets. But take heart, Hilary Finger-Puppet and not Donald Duck Finger-Puppet will probably get the top job in the White House, so that’s alright then. Oh, wait…

Excitement is revving in UK transport quarters as George Osborne has announced trials of driverless lorries on a quiet stretch of the M6 in Cumbria (BBC Online, 16 March). The potential fortune saved in the cost of goods distribution – through not having to pay driver wages or stick to tachograph hours – is pushing autonomous road technology ahead despite reservations by many stakeholders, including even Google, whose own unblemished driverless record perished recently when their car hit a bus. For one thing, it’s by no means certain that sensors in driverless vehicles are good enough yet to cope with all weather and light conditions, nor is it clear that they can correctly interpret the gestures of human traffic cops. Worse, they are still rather too easy to hack, or fool with lasers into swerving to avoid non-existent objects. And if they run you over, who exactly is liable? As we’ve seen before with downloading and also with 3D printing, the technology has already raced round the world while the legal framework is having breakfast in bed.

The Cumbria trial, however, hopes to avoid most of these problems by going in convoys of ten trucks, with a human driver in the lead truck. Cue for a particularly cheesy 1970s song about convoys at this point. But the AA points out that, with more entrances and exits than any other motorway system in the world, the UK is not going to be able to accommodate 10-truck convoys, because of all the other vehicles trying to get on and off the motorway.

There’s an obvious hi-tech solution to this. Create a special single lane for these truck convoys, then link all the trucks together and mount them on steel rails to save fuel and reduce drag. Instead of driving the lead truck, the driver would be driving the entire chain, or you might call it a ‘train’. You could probably run passenger versions of these ‘trains’ too, with perhaps quiet coaches and restaurant cars.

Funny that nobody’s ever thought of this before.