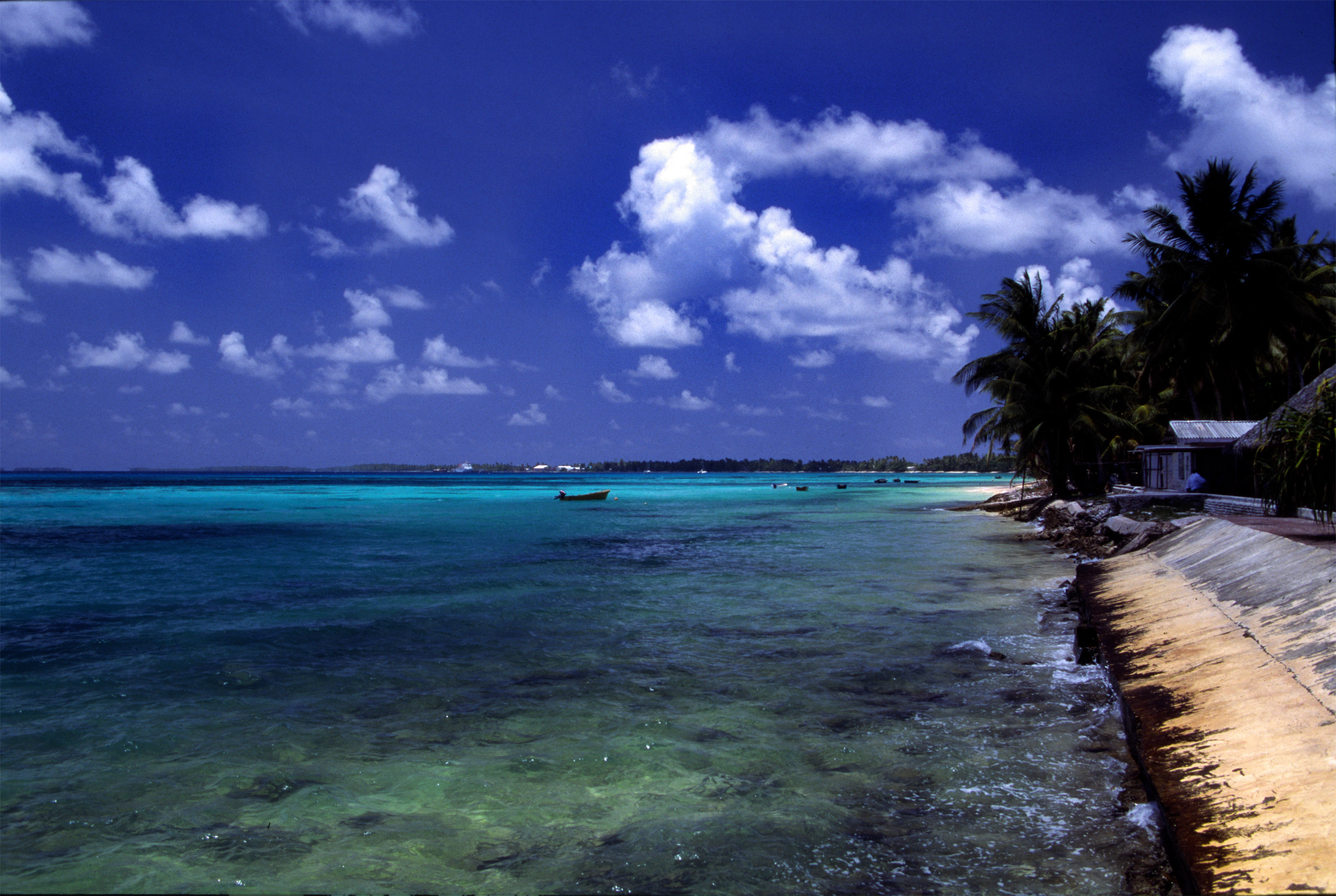 Tuvalu is one of the smallest countries in the world. It has a population of only 11,500 and has been inhabited for almost 3,000 years. In 1997 the then Tuvalu Prime Minister Koloa Talake addressed world leaders at the Kyoto conference. He petitioned countries around the world to take immediate action on global warming and make the changes needed to stop it in its tracks. He explained his low-lying country was sinking into the Pacific Ocean because of rising sea-levels. The current Prime Minister of Tuvalu, Enele Sopoaga, said climate change was the ‘Enemy Number One’ for his country. The people of Tuvalu don’t require scientists to explain it to them. They can see it for themselves. Salt water is flooding the land and the people are having difficulties growing their crops because of salination of the soil. Groundwater is increasingly becoming undrinkable due to sea-water contamination. It is brackish and salty. Islanders are relying on catching rain water.

‘What we are talking about is survival,’ said Anote Tong, the President of Kiribati, another island nation in the Pacific Ocean that comprises a population just over 100,000 on a string of atolls barely 3ft (0.9m) above sea level. ‘It’s not about economic development … it’s not politics. It’s survival.’

Following the Australian Immigration Minister Peter Dutton’s joke about the predicament of the low-lying Pacific Islands (‘Time doesn’t mean anything when you’re about to have water lapping at your door’), President Tong commented ‘What kind of a person is he? As long as there is this kind of attitude, this kind of arrogance in any position of leadership, we will continue to have a lot of tension. It shows a sense of moral irresponsibility quite unbecoming of leadership in any capacity. I find that extremely sad, extremely disappointing that we are making jokes about a very serious issue’. Tong went on to warn Dutton that any future Australian immigration minister will have to deal with a wave of Pacific refugees from low-lying countries like Kiribati, if sea levels continue to rise. ‘I don’t think so, I know so, because the science is quite categorical’ he said. Already two islands belonging to Kiribati have been totally submerged.

Nor will it be only vulnerable island-states like Tuvalu, or Kiribati and the thousands of islands around the world that are also just above sea level which will disappear. Vast tracts of river delta are not much higher than the ocean shore while some of the world’s biggest coastal cities are very close to sea level. Approximately 100 million people live in areas below sea level. Tens of millions of people who live in these low-lying areas near the ocean will have to migrate.

According to a 2007 Intergovernmental Panel on Climate Change report the sea level rise on the Bangladesh coastline could be about one meter in the next 50 years this will cause 11 percent of Bangladesh’s landmass to be covered by the water from the Bay of Bengal, forcing approximately 20 million (near enough the population of Australia) environmental refugees inland to the already densely populated and over-burdened cities. Up to 10 million could be displaced in the Philippines and millions more in the Nile River delta which lies only 2 meters above sea level. Such water level rises would affect low-lying cities around the world including: London, Shanghai, Hamburg, Bangkok, Bombay, Manila, Buenos Aires and Venice.

If places like Tuvalu and Kiribati are to survive we must act so they do survive and that can only be accomplished by establishing a socialist society. Socialism is defined as the common ownership and collective control of the means of production and distribution. It is the name given to the next stage of civilisation, if civilisation is to survive and we are not doomed to a return to the Dark Ages. As long as the instruments of production — land, machinery, raw materials, etc — remain private property, only comparatively few can be sole owners and so long as this is the case, they will use their private ownership for their private advantage, regardless of the cost to others. To protect the environment calls for the rational allocation of resources and for the widest possible development of democracy. This is a struggle for today. This is the struggle for socialism. Capitalists are not about to cut their profits for anybody. Have they ever reduced their profits to provide jobs, end disease, or avoid wars? There’s no reason to expect them to do such a thing in order to stop islands sinking into the sea from climate change. Many will simply be seen as unavoidable collateral damage in the drive for profits.