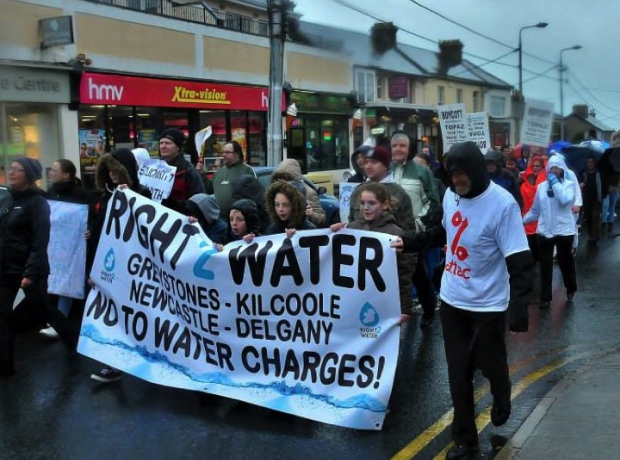 It’s a funny thing. The United Nations’ Universal Declaration of Human Rights (UDHR) contains a clause that says: ‘Everyone has the right to a standard of living adequate for the health and well-being of himself and of his family, including food, clothing, housing and medical care and necessary social services, and the right to security in the event of unemployment, sickness, disability, widowhood, old age or other lack of livelihood in circumstances beyond his control’(Article 25). Yet this has never been given effect by the states concerned. Instead they tend to try and manage markets so that people can try to secure their standard of living by buying it. Also, curiously, although food is mentioned, water isn’t. The UDHR was adopted in 1948. It took until 2010 for the toothless United Nations to declare that water is a right too.

We can see how effective this change of heart has been, over in Ireland. Here, as the BBC notes: ‘Tap water in the Republic of Ireland until now has been free’ (www.bbc.co.uk/news/business-29426733). The government there, however, is intent on introducing water charges and water meters. As the info sheet from Irish Water explains: ‘Water is a valuable resource but it is expensive to deliver. It is costing €1.2 billion every year to run the public water system, with €1 billion of this funding coming from the Exchequer. This current funding model is no longer sustainable. In addition our infrastructure is badly in need of an overhaul’ (www.water.ie/why-value-water/). So, water is plentiful in Ireland, but treating it costs effort and in capitalism, effort means money.

Note, they do not explain why this current funding model is becoming unsustainable, or how charging households directly is more sustainable. They say that under the current system, those who pay more taxes are paying, pro-rata, more of the costs of the infrastructure and that this is unfair, and so those who have to count their pennies should be made to pay a wedge or lose their access to water. So much for the right to water in Ireland. Of course, this change is about commercialising water: ‘This transition will ensure that Ireland is well positioned to attract foreign and indigenous investment, creating real potential for new jobs within the country’ (www.water.ie/about-us/company/about-irish-water/). So, as a ‘semi-state’ company, it will be attracting investment and profits from the water that hitherto was in effect a necessity of life to which everybody had free access.

Of course, this is hardly uncontroversial, and there have been demonstrations tens of thousands strong on the streets of Dublin against the charges. It is doing significant damage to the Fine Gael/Labour coalition government’s popularity. There have also been reports of communities and activists blocking the installation of water meters, and sabotaging those that have been installed. Such actions are widespread, and being reported widely on social media. There are also widespread threats to boycott the charge and refuse to pay it.

Naturally, the government has tried to make concessions, giving people an uncharged allowance of 30,000 litres, and rebates in the form of a €100 water conservation grant to all households. Clearly, such concessions are designed to mitigate the transition to charging, whilst retaining the core principle that water has become a commercialised commodity in the hands of Irish Water.

There are formal campaigns at a national level as well. Right2Water is a campaign backed by Irish trade unions, and it was responsible for the main marches back in December 2014 that attracted 80,000 in Dublin marchers and around 200,000 overall across the country). As might be expected with such campaigns, the left parties, such as the Workers Party and the Communist Party are a formal part of the alliance.

Additionally, the Irish SWP has also been involved in promoting these protests, through their People Before Profit campaign, while the so-called Socialist Party (really another Trotskyist group) are engaging in their own boycott campaign. Whilst they are involved in the formal organisations, it seems clear that the real impetus on the ground is coming from the communities themselves, and all parties are running to keep up.

The far-left’s main success has been to win a by-election in Dublin South. The Anti-Austerity Alliance (which some accuse of being broadly controlled by the ‘Socialist Party’) won a by-election there in October, thanks largely to their opposition to the water charges.

This has been a strong test of the tactic of using popular discontent and campaigns for reforms in order to win support for anti-capitalist organisations. Whilst it may seem that winning a seat in parliament is a vindication of this tactic, it also illustrates its weakness. Sinn Fein had been expected to win the Dublin South seat, and were stung by the defeat. They are an opposition party in the Dáil, and one that is expected to gain significantly in the coming general election, feeding off discontent with the government and austerity.

They had previously been relatively quiet on the water charge issue, but their defeat stung them into action. They mobilised their supporters for the big protest marches, and ensured that Gerry Adams was given a significant platform. In effect, they walked up and stole the issue from the Trotskyists. This is a clear example of the way in which reforms to capitalism can be appropriated by any opposition party with sufficient freedom to manoeuvre, and the way in which they do not guarantee any advance in support for socialism in itself.

Of course, if the ‘Shinners’ win the next election, with their anti-austerity agenda, they are going to have to make good all their promises, and that means governing within capitalism. They will find that the requirement to attract funds for all activities they want the state to fund means in some sense either accommodating to the markets or international bodies. Another party will come along and capitalise on the discontent with their policies (and, again, the advantage lies with the established parties with networks of support, it is unlikely to be a swing to the left that will follow them).

Actual socialism would, of course, have to find the materials and effort to maintain a water infrastructure. Maybe all the time and effort that goes into protesting could be instead spent on real solutions. Certainly, the actual expense and effort of administering taxes and soliciting investment, collecting charges, taking people to court, and so on, could be done away with. Instead, we could, and should guarantee every man, woman and child on earth their right to clean water.