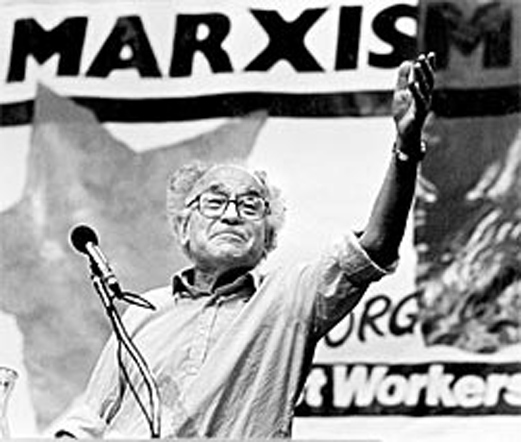 Well-known for its stunts, street stalls and student activism, the SWP suffered a setback a couple of years ago which led to an exodus of members. One of them was Ian Birchall, the biographer of the group’s founder Tony Cliff and himself a one-time member of the party’s leadership. He had been a member of the SWP and its predecessor, the International Socialism group, for over 50 years. Last December he offered some views on his blog as to what went wrong (http://grimanddim.org/political-writings/2014-so-sad/)

When it was formed in the 1950s as a Trotskyist group which recognised that the so-called USSR was state capitalist (as we’d known all along) it was organised on the same lines as many other left-wing groups in this country. Its members were in the Labour Party and portrayed themselves as left-wing Labourites. Then in the 1960s things began to change, they moved out of the Labour Party and in 1968 Cliff decided that it was time to re-organise the group on stricter Leninist lines.

What prompted this was the general strike in France earlier that year. Typically, as a good Trotskyist, Cliff attributed its failure to result in a socialist revolution to the absence of a revolutionary party to lead the striking workers (not that socialist revolution was the real aim of the strike though it was in fact a success from a trade unionist point of view). He concluded that what ‘revolutionaries’ should do in the light of this was to openly organise themselves along the same lines as Lenin’s Bolshevik party which, according to him and Trotskyist legend, had led to a successful socialist revolution (even if in his view it later degenerated into state capitalism).

Lenin had set out his view on how a revolutionary party should be organised in his notorious 1903 pamphlet What is to be Done? In it he proposed a party of full-time professional revolutionaries which should seek to lead the workers and peasants by formulating populist slogans reflecting the level of understanding that ‘the masses’ were considered capable of reaching.

This might have made some sense as a strategy for overthrowing a backward, autocratic regime like Tsarism. As it happened, the Tsarist regime collapsed of its own accord under the pressures of the First World War but Lenin’s organisational form did help the Bolsheviks seize political control once Tsarism had collapsed. This success led Lenin to proclaim that this was the way revolutionaries should organise too in developed capitalist countries, even those where political democracy existed.

So, in 1968 the members of IS changed the name of their paper from Labour Worker to Socialist Worker and, more importantly, abandoned its previous organisational structure under which policy was decided by a conference of branch delegates voting on motions proposed by branches and where the members of the executive committee were elected as individuals. This was all swept aside and the ‘slate’ system that the Bolshevik party had used was adopted and which had also been inherited by the CPSU in Russia (yes, Leninism did lead to Stalinism too).

Under this system the ‘leadership’ (politburo, central committee or whatever it is called) is elected en bloc at the party’s conference. Delegates don’t vote for individual candidates, but for a list, or slate, containing as many names as there are vacancies. In theory there can be more than one list but in practice there never is or has been. In the SWP (as in the USSR), there was just one – proposed by the outgoing leadership. Rather than trying to put forward a rival list, the leadership’s opponents preferred to leave and form another group organised on the same lines (one explanation for the proliferation of Trotskyist groups).

It can easily be seen that this is a recipe for the emergence of a self-perpetuating leadership. Which is precisely what happened, as Birchall noted:

‘recent events have shown the limitations of the slate system. It has become a means whereby the CC can indefinitely propose itself for re-election, co-opting approved individuals as it goes.’

There was another consequence in the SWP too:

‘Moreover, a career path has now clearly emerged – comrades, generally former students, become full-timers, and if they are successful, they rise in the apparatus and become CC members. Thus we get a CC almost entirely composed of people who have spent most of their political life as full-timers and have very limited experience of work or trade unionism.’

The slate system was also applied to elect the branch delegates to conference:

‘Back in the eighties, when strong branch committees existed, the branch committee would nominate a slate of conference delegates. While it was obviously possible for members to nominate an alternative slate, this was frowned on, and in practice was relatively rare. I recall a chairperson telling us the agenda for a branch meeting and saying “and then the conference delegates will be announced”. In practice he was right – this was what usually happened.’

So the SWP ended up a top-down organisation run by a self-perpetuating clique.

Perhaps surprisingly, Birchall does not draw the conclusion that this is where the slate system, a central tenet of the Leninist vanguard party concept, was bound to lead. He still thinks in terms of a vanguard party of professional revolutionaries organised on Leninist lines. His beef is not with the theory but with the way it was applied in the SWP – bureaucratically rather than democratically. But for him ‘democracy’ is not a decision-making procedure but merely a means of providing information to the leadership so that it can formulate the best policy to pursue and the best slogans to put before workers for them to follow:

‘… a revolutionary leadership needs to know what is going on in the working class. It cannot do this by reading the Financial Times, it has to listen to comrades who have roots in different sections of the class and who can report on what is happening on the ground. As Cliff argued: “… they have to learn from their fellow workers as much as – or more than – they have to teach. To repeat, the job is to lead, and to lead you have to thoroughly understand those you are leading.”’

This is not democracy in any meaningful sense. It’s still saying that the wage and salary working class is incapable of freeing itself on its own but needs to be led by a self-appointed vanguard. It is still rejecting the view that socialism, as a fully democratic society, can only be established democratically, both in the sense of being what a majority want and in the sense of employing democratic methods.

To establish socialism the wage and salary working class does need to organise itself to win political control, i.e. as a political party, but in a democratic party, not to follow a vanguard party or any other would-be leaders.

There is, however, one thing that Birchall seems to have learnt after more than 50 years as a Trotskyist/Leninist:

‘The important thing at present is the battle of ideas; as William Morris put it, “it should be our special aim to make Socialists”.’

This is a quote from the Statement of Principles of the Hammersmith Socialist Society, drawn up in 1890. It’s what we’ve been saying for over 100 years.