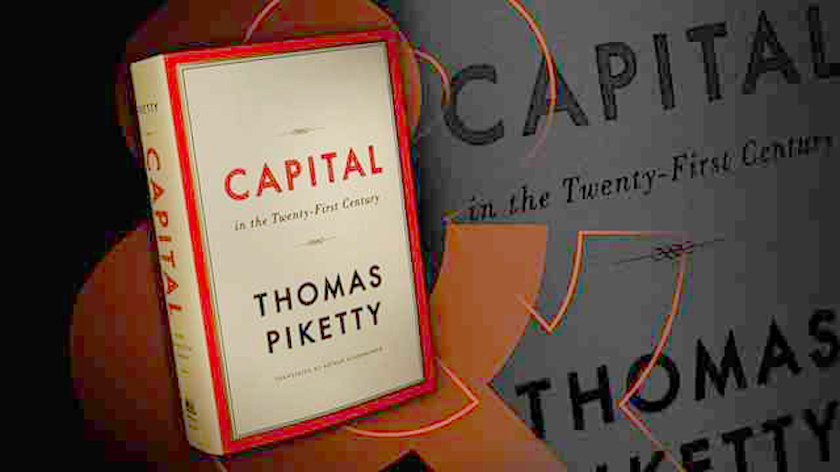 Capitalism is based on the ownership and control of the means of wealth production by a minority. This can take various forms but, historically, the most usual – what might be called the classic form – has been through private property titles vested in individuals and enforced by the courts and the state generally. Another has been direct minority control of the state where ownership of most means of production is vested in the state, as in the old USSR.

Where ownership is through private property rights, minority ownership can be shown from the degree of concentration of property titles. This can be worked out from inheritance tax returns, wills and household surveys. The results in all countries show a very unequal distribution of wealth amongst the population .

The minority ownership of the means of wealth production is also reflected in the unequal distribution of income, due to the large non-work, property income of the top property-owners.

In this much-discussed book French economist Thomas Piketty has assembled data about the distribution of wealth and of income covering over two centuries, mainly from France, Britain and the US but also from other European countries and some in Asia and Latin America. He posits an economic law that the distribution of wealth tends to become more unequal, in that the top 10 percent come to own proportionately more, the wider is the gap between what he calls the ‘rate of return on capital’ (r) and the rate of growth (g).

Although he sets out two ‘fundamental laws of capitalism’ he never actually defines what he means by the term. He does, however, define ‘capital’:

‘In this book, capital is defined as the sum total of nonhuman assets that can be owned and exchanged on some market. Capital includes all forms of real property (including residential real estate) as well as financial and professional capital (plants, infrastructure, machinery, patents, and so on) used by firms and government agencies’ (p. 46).

This is not the definition of either conventional or Marxian economics as it includes land and owner-occupied houses. So his ‘rate of return on capital’ is not the same as the rate of profit, which is the ratio of profit to wealth invested in production with profit in view. Piketty himself recognises this:

‘… the rate of return on capital measures the yield on capital over a year regardless of its legal form (profits, rents, dividends, interest, royalties, capital gains, etc.), expressed as a percentage of the value of capital invested. It is therefore a broader concept than the ‘rate of profit,’ and much broader than the ‘rate of interest,’ while incorporating both’ (p. 52).

It will in fact be less than the rate of profit, which is normally much higher than the 4-6 percent that Piketty calculates as the range of his rate of return.

There is another peculiarity about his ‘rate of return on capital’. In some of his graphs he applies it to pre-capitalist times so it comes to mean any return, in whatever form, that property-owners obtain by virtue of owning property, including the labour service of feudal barons and the slave-labour of slave-owners in ancient Greece and Rome and not just the financial returns on marketable wealth as under capitalism.

This means that his claim at one point that r > g is ‘the fundamental structural contradiction of capitalism’ (p. 572) cannot be sustained. It is not even a contradiction but would be some measure of the exploitation of the producers in all private property societies whether or not that property or its income are marketable.

He offers no explanation as to how and why there should be a ‘return’ on capital but simply takes its existence for granted. There is no understanding that it only arises in private property societies and amounts to a tribute extracted from the producers – under capitalism from the class of wage and salary workers – by those who monopolise the means of wealth production.

It’s the same with ‘growth’, which he defines as the increase in a year of national income plus the increase in population. He just accepts that it happens as productivity and population increase. There is no understanding that what drives the capitalist system is the economic imperative, imposed through competition, on individuals and firms, who have invested in production, to maximise profits and accumulate them as more and more capital. Even so, his criticism of capitalism as he understands it is pretty damning. 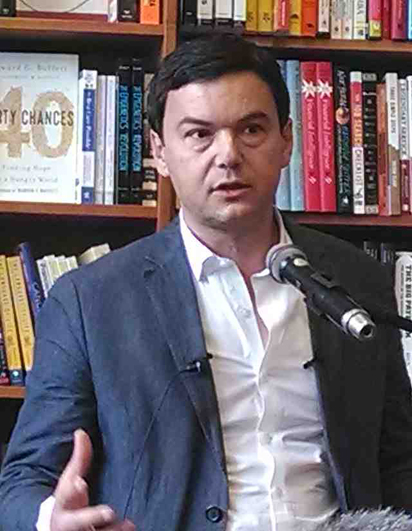 Chapter 10 on ‘The Inequality of Capital Ownership’ has tables which show that in France the top 10 percent currently own just under 60 percent of total wealth and the top 1 percent nearly 25 percent. The figures for Britain are 70 percent and 29 percent; for the US 70 percent and 32 percent; and for Sweden (said to be the least unequal country in the world) 59 percent and 20 percent.

The tables also show, as graphs, the evolution of wealth-owning inequality for the two hundred years from 1810 to 2010. The highest degree of inequality was reached in 1910 when the top 10 percent in France owned 89 percent and the top 1 percent 60 percent; in Britain it was 90 percent and 70 percent and in Sweden 90 percent and 60 percent. At that time the US was less unequal than Europe with 80 percent and 45 percent.

The tables confirm the socialist contention that the basis of present-day society is the ownership of the means of wealth production by a minority. But they also show that the degree of inequality has gone down as well as up during this two-hundred year period. This requires an explanation. Piketty offers two.

The first is a long-run secular trend which he calls ‘the emergence of the patrimonial middle class’ by which he means that the share in total wealth of the middle 40 percent – those in between the top 10 percent and the bottom 50 percent – has increased since 1910. This statistical category has come to acquire enough wealth to own, together, between a quarter and a third of total wealth. This has had the statistical result of reducing the share of the top 10 percent but has not affected or reduced or been at the expense of the amount of wealth of the top group, whose wealth has continued to grow in absolute terms.

It should be noted (though Piketty doesn’t) that a large amount of the wealth of the middle 40 percent takes the form of the houses they live in and which have been paid for but which are not capital in the sense of an asset that brings in an income. This means that the figures in the tables underestimate the degree of concentration of the amount of assets that do bring in an actual property income.

Piketty notes that this shift has not affected the share of ‘the poorest half of the population, whose share of total wealth has always been miniscule (generally around 5 percent), even in Sweden (where it has never been more than 10 percent)’ (p. 347).

The exception not the rule

The second explanation that Piketty offers as to why the share of the top 10 percent fell in the period 1920-1970 develops his theory that the wider the gap between r and g the stronger the trend towards greater inequality. His explanation is that during this period the rate of return was reduced by the destruction of wealth during the two world wars of the period and by the devaluation through inflation of capital invested in government bonds. At the same time the rate of growth increased due to reconstruction work. The result was a reduction in inequality beyond that caused by the rise in the share of the middle 40 percent.

This explanation makes this period, when the rate of return, the share of income from capital in national income and the share of the top 10 percent in national wealth, all fell – in other words, when the richest were squeezed a little, though hardly till the pips squeaked – an exception to the normal working of capitalism.

The normal or ‘natural’ tendency as he calls it, for Piketty, is for the rich to get proportionately richer. In fact he argues that the degree of inequality will tend to increase in the course of the 21st century on the grounds that growth is likely to be slower while the rate of return can be expected to remain the same, so that the gap between the two will widen. He sees this as a danger to democracy and the welfare state (which he calls ‘the social state’). As an old-fashioned Social Democrat reformist (he is a supporter of the French ‘Socialist’ Party) he wants to stop and reverse this trend and probably wrote the book to drum up support for measures aimed at achieving this.

The trouble, from his point of view, is that his theory, if valid, provides a powerful argument against the chances of this reformist campaign succeeding. It means that the reformists in this field have set themselves the task not simply of reducing inequality in the ownership of wealth but also of overcoming economic forces working in the opposite direction.

That legal private property capitalism has a tendency for the rich to become richer in absolute terms is a consequence of the accumulation of capital (in the sense of wealth used to produce more wealth with a view to profit). Where there are private property rights over means of production the income these ‘yield’ when used as capital goes to the owners and the part that is re-invested (accumulated) is added to their wealth, ie, they become richer. This is a tendency the reformists will have working against them, whether or not Piketty is right about there also being a tendency too for the rich to get richer relative to the rest of the population.

The measures he proposes in Part Four to stop the rich getting richer are incredibly weak – higher taxes on high incomes (on the ‘supersalaries’ of the ‘supermanagers’ as well as the investment income of the rich) and a wealth tax. He recognises that no one country is likely to adopt this for fear, in the context of globalised capitalism, of putting off outside investment and so proposes a ‘global wealth tax’. Which is even more unlikely.

In any event, it is not a less unequal distribution of wealth and income that will help solve the problems that the class of wage and salary earners and their dependants face under capitalism. It is for the minority who monopolise the means of wealth production to be expropriated and for these to become the held in common so that they can be used to turn out what people need instead of things for sale with a view to a profit for their owners as at present.