The Covenanters: the Scottish Taliban? 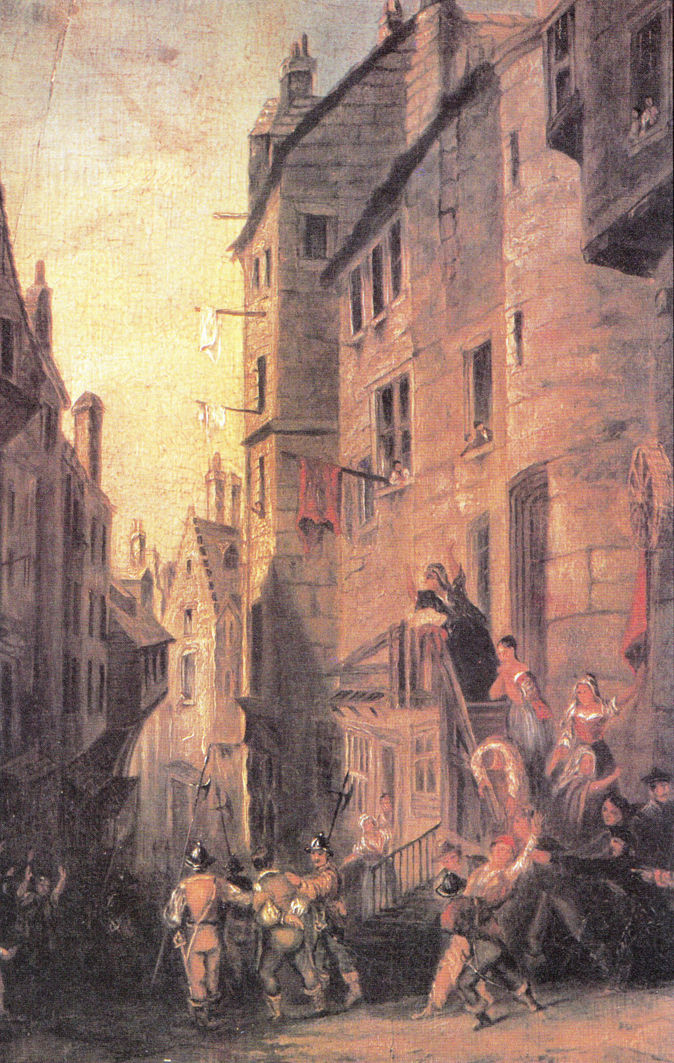 In the run-up to the Scottish referendum we conclude our three-part series exposing the myths of Scottish nationalism.

Over 18,000 and possibly as many as 30,000 Scottish Presbyterian Covenanters gave their lives for their beliefs during the seventeenth century. To understand the background to this, we have to remember that religion and politics have been interwoven throughout Scottish history. For instance, there was the Calvinist Reformation where John Knox was able to bend much of Scotland to his will and control Parliament. From the signing of the Scottish National Covenant of 1638 to the Restoration of the Monarchy in 1660 there was a movement to make Scotland a theocratic state. These dissenters were the staunch supporters of Presbyterianism, the radicals of their day, who strictly followed the rules of John Calvin, John Knox and latterly Andrew Melville. It was their desire for a theocratic government and rejection of the king`s claimed supremacy of the church that branded them as zealots and a threat.

The Kirk was the focus for the Presbyterians in which the senior members of a congregation were elected as the Elders. They and the minister held great sway through the ‘Kirk Session’ – the local church court. It was through the workings and authority of this court that the day-to-day life of the congregation was overseen. The Kirk Session was responsible at local level for matters of conscience and religion which in practice ranged across practically everything. Their role extended to dealing with excesses and behaviour of all kinds, whether drink or style of dress, fornication or lewdness, oppression of the poor by over-taxation or deception in buying and selling. The local nature of a punishment, both the publicity and enforcement locally, meant that action was swift. The most common civil penalty imposed by the Kirk Sessions was the fine. In some places this was according to a set table, in others there was a quite enlightened approach to fines according to the estate of the offender (proportionality as we call it today). Non-payment of fines could result in imprisonment or being locked in the ‘jugs’ – a lockable metal collar attached to a wall by a length of chain, for the duration of the sermon. The penalty for adultery was to stand dressed in sackcloth, bare headed and bare feet at the kirk door; then sit on the stool of repentance in front of the congregation for perhaps six months or longer.

Sometimes the punishment included fines and whipping too. Few resisted as under a law of 1581 the adulterer who refused the kirk`s punishment could be put to death. In the period 1574 to 1612 Puritanism and the zealous Presbyterianism of Andrew Melville gained a foothold that punished a wide range of alleged excesses. This Puritan zeal included attacks on Christmas and traditional holidays such as Midsummer Eve. Pilgrimages, dancing, carol singing, merrymaking at weddings, and wakes; and failing to work on Christmas Day, were all subjects of condemnation. In 1579 a law was passed banning Sunday travel, recreation and drinking. A second and more intense phase of Puritanism appeared after 1638 when much of the country was imbued with fervour following the National Covenant. The Puritan vigour was subsequently endorsed by Oliver Cromwell when he subjugated Scotland during his republican rule. In 1656 the ultimate law was passed that forbade frequenting taverns, dance, listening to profane music, washing, brewing ale or baking bread, travelling or conducting any business on a Sunday. This, for example, led to the punishment of children for playing on a Sunday, and a public warning about carrying water, sweeping the house or clearing ashes from the fire place.

The National Covenant was drafted by Sir Archibald Johnstone, and Archibald Henderson. It was in three parts – a reproduction of the Confession of King James VI (later James I of England) in 1580; a detailed list of the Acts of Parliament which confirmed Presbyterianism and condemned Popery; and, thirdly, a protest about the changes in worship which was an attempt to force episcopal reforms on the nation. King Charles over-reacted and regarded the Covenanters as rebels. In June 1640, during an uneasy truce, the Scottish Parliament assembled in defiance of the King’s attempts to postpone its sitting. A number of acts were passed that radically altered the constitution of Scotland. A new Committee of Estates was appointed to govern Scotland when Parliament was not in session. The Committee’s primary responsibility was the defence of Scotland, for which it was granted powers to borrow money and to raise taxes. The Committee was dominated by Covenanters. The Committee remained in power whenever Parliament was not sitting throughout the turbulent 1640s. The fundamentalist Kirk Party became the dominant political force and governed Scotland as a theocracy from 1648-50, characterised by regular purges of officials and soldiers regarded as ungodly or ‘malignant’. The Kirk’s desire to stamp out sin and to enforce moral reform, in accordance with the principles of the Covenant, resulted in one of Scotland’s periodic ‘witch-crazes’ during 1649-50, in which hundreds of alleged witches were persecuted, with many burned at the stake.

Charles II was proclaimed King of Scots in February 1649, but the Kirk Party insisted that he should first accept the Covenant and promise to establish Presbyterian church government throughout the Three Kingdoms. Realising that he needed a Scottish army to help him regain the thrones of England and Ireland, Charles was obliged to sign the Treaty of Breda in May 1650 and reluctantly took the Covenant upon his arrival in Scotland the following month. The Kirk Party struggled to keep Charles under its control by banishing most of his closest advisers and by insisting upon purging the Scottish army of all but strict Covenanters in the weeks before the Battle of Dunbar against Cromwell. Up to 80 veteran officers and 3,000 experienced soldiers were judged unfit to serve and were replaced by inexperienced recruits, which contributed to the Scottish defeat at Dunbar and discredited the Kirk Party. The Kirk Party was further weakened when hard-line Covenanters broke away to form the Remonstrant movement.

On 14 December 1650, the Commission of the Kirk decreed that it was Parliament’s duty to employ all lawful means to defend Scotland against the English invaders, which opened the way for the re-admission of Royalists and Engagers into the army once they had undergone suitable penance. Pro-Royalists were known as ‘Resolutioners’ because they supported the resolutions of 14 December. They were opposed by ‘Protesters’, a group which was led by Remonstrants but included many who had not supported the original Remonstrance. The Protesters continued to object to the relaxation of the strictures against ‘malignants’ but the Royalists rapidly gained influence in the military and civil administration of Scotland after the coronation of Charles II culminating in the fall of the Kirk Party.

The Restoration of Charles II in 1660 was greeted with some euphoria among the general populace who had endured over twenty years of almost constant war. But it was short lived. Charles turned upon the Kirk and its leaders who had given him such a tough time in 1650 – 1651 when he had tried to take up his throne following the execution of his father (Charles I). At his Restoration he took his revenge, executing the Marquis of Argyll, James Guthrie and Archibald Johnstone. He next caused legislation to abolish all that Presbytery had achieved and restored episcopacy along with compulsory attendance at the approved church on pain of heavy fines for non-attendance.

From about 1670 the country was under military rule as Charles intensified the persecution of the people and prompted the ‘Killing Time’ of 1684-5. To quell unrest in south-west Scotland some 3,000 Lowland militia and 6,000 Highlanders (the ‘Highland Host’) were billeted in the Covenanting shires. The Highlanders were responsible for many atrocities, robbery and rape, pillage and plunder. Covenanters were flushed out and hunted down as never before and the common soldier was empowered to carry out summary executions of any suspect without the requirement of a trial. A Covenanter once caught by the King’s troops was shot on the spot. Usually it was done without any evidence. Brutality in these days defied the imagination and the persecution had no mercy on man, woman or child, irrespective of circumstances. These policies provoked armed rebellions in 1666 and 1679, which were quickly suppressed. Following the Battle of Bothwell Brig some 1200 prisoners were taken and incarcerated in a make-shift prison at the Greyfriars Kirk in Edinburgh, where many died of suffocation. Of these prisoners, 257 ringleaders and ministers were sentenced to be transported as slaves. The vessel set sail but struck rocks off Orkney. It is said that the captain despite the pleas of the prisoners ordered the hatches to be chained. Thus it was on December 10, 1679, that 211 Covenanters went to a watery grave.

Cameronian was a name given to a section of the Scottish Covenanters who followed the teachings of Richard Cameron, and who were composed principally of those disavowing allegiance to Charles II and the government of Scotland, in the name of ‘true Protestant and Presbyterian interest’. They opposed government interference in religious affairs, and were anti-Catholic, refusing to take the oaths of allegiance to an uncovenanted ruler. They wished to restore the ecclesiastical order which had existed between 1638 and 1649. The Cameronians saw themselves as early Christian martyrs by holding steadfastly to their beliefs in the face of torture and death. It was from these rebellious religious militants that the famous Cameronian Rifles regiment was formed, not as some suppose, from the family clan Cameron, and it was why each new recruit to the regiment was issued a bible.

Were the Covenanters essentially Protestant theocrats? Or were they really democrats challenging an absolutist regime? Presbyterian beliefs meant an opposition to the King`s claim of supremacy in church matters, although they acknowledged his supremacy in civil matters. Yet to safeguard their religious rights required a clerical influence on the civil government. Covenanters stood up to the powers of the Crown but never, at any point in time, challenged the Crown’s right to rule.

Some historians have tried to portray the Covenanters as an early revolutionary movement. The Covenanters are regarded by some as freedom fighters who bravely opposed attempts by the English crown to destroy the Scottish religion, culture and identity and it is also claimed that those Protestant rebels were sidelined in Scots’ history. The King had indeed been defeated in his attempt to dictate the religion of his subjects, but it was, nevertheless, the Covenanters’ intention to deny the religious freedom they sought for themselves to all others. Being Episcopalian wasn’t good enough; to be Catholic was unforgivable. Inspired by the theocratic spirit, the bigoted creed of the Covenanters sought to create a fundamentalist Scotland. In many ways, they can be seen as a sort of tartan Taliban, our very own Scottish ayatollahs, who tried to turn Scotland into a theocratic state, with its communities controlled by the church. In that respect, they do not deserve too much of our sympathy.