Sport and the Spirit of Capitalism 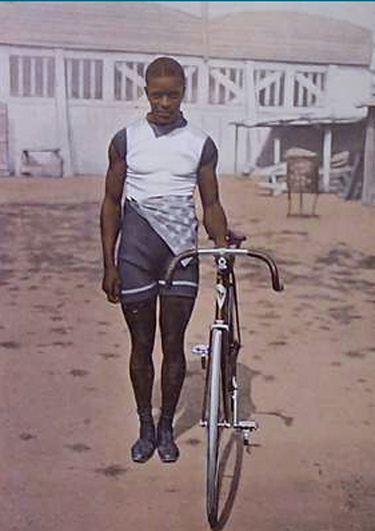 Today the scandal in professional cycling is doping: a hundred years ago it was racism.

Traditionally, things have tended to be difficult for the American athlete who happens also to be black. Jesse Owens, snubbed by his own President, had to travel to the 1936 Berlin Olympiad for the “warmest ovation of his life” – and a friendly wave from the Fuhrer himself – whilst a young Cassius Clay, disgusted by his homecoming reception some 24 years later, reportedly consigned his Rome Olympic Gold to the muddy depths of the Ohio. Practically unknown today, although in his time as famous as Owens or Clay, is cyclist Major Taylor. Why?

In the couple of decades straddling the turn of the twentieth century, cycling was as hugely popular in the USA as baseball or boxing. Before the arrival of the motor car and aeroplane, it was effectively the world’s fastest sport with its own galaxy of highly-paid superstars, drawn mainly from the ‘artisan classes’. However, as the century progressed this popularity steadily diminished until, by the outbreak of World War Two, it had sunk into almost total oblivion; its traditions and gladiators – particularly its black ones – forgotten.

Marshall‘Major’ Taylor – as a performing trick-cycling youngster, he sported a mock-military tunic – was born into rural Indianan poverty in 1878, his slave parents having crossed into freedom from Kentucky. Effectively adopted by a wealthy white family as companion to their only son, he spent several happy years during which he was treated, and encouraged to view himself, as racially equal. Taylor was, therefore, no Jim Crow-era ‘uppity nigger’, never having been a ‘downity’ one in the first place.

Such lifestyle gave him access to the unheard-of luxury of a bicycle, upon which machine, when he duly returned, aged thirteen, to his birth family, he displayed such prodigious competitive prowess that, allied with his acrobatic skills, he was able to turn professional some five years later.

His rise thereafter was meteoric. Within a couple of years he had won both national and world titles, broken and re-broken no fewer than seven world records – and all in the face of appalling racial hostility. With cycling’s then governing body, the League of American Wheelmen attempting an outright colour ban to supplement prevailing member antipathy, Taylor experienced frequent difficulty both entering events – and then exiting them in one piece. Under the noses of prejudiced officials, he was routinely fouled and assaulted, at best having to single-handedly overcome the combined efforts of the entire field. Spectators and journalists, however, loved this gutsy, stylish rider – “the few hissed: the many cheered” – and promoters, recognising his box office appeal, welcomed him.

A devout Baptist, Taylor’s refusal to compete on Sundays effectively precluded further world titles and when physically attacked his response, invariably, was to turn the other cheek – and simply pedal a bit faster. Over several years he was, unquestionably, the best short-distance cyclist on the planet, idolised throughout Europe and the Antipodes, practically unbeatable in fair competition.

Retiring in 1910, Taylor, like so many sportsmen, struggled with life-beyond-adrenalin. He entered the fledgling motor trade but proved a better cyclist than businessman. Ever-generous and charitable, his fortune slowly evaporated, his marriage foundered, his health collapsed and dying penniless in Chicago in 1932, his unclaimed corpse was accorded a segregated pauper’s burial.

So much for ‘sport’ within class-divided, socially fractured society. In truth, how could it be otherwise? With life for billions a constant struggle for basic economic subsistence or paltry reward – a rat race – its recreational elements must surely reflect this. Where winning, acquiring, surviving are the overriding imperatives, then cheating, shortcutting, colluding will inevitably follow. And anyway, the race itself is pretty well fixed – odds fiddled, running order predetermined, from boudoir (parked Bentley or park bench) to battleground (boardroom or building site).

When the rat race is over

What then, when humanity has finally transcended the rat race? With the world’s resources now the common heritage how will societal attitudes towards sport have altered and in what ways might the calibre of performance have been affected? Will there actually be competitive sport?

The great post-war Australian coach, Percy Cerutty once averred that the finest athletic displays he ever witnessed were in Aboriginal communities where, uncluttered with and unfettered by what he called “Western values” and religious hang-ups, participants deported themselves with a natural elegance and fleetness of foot, and could endure levels of pain and suffering well beyond those of their ‘civilized’ counterparts.

Replicating that in a concrete stadium would, however, have been problematic. Chucking a spear across an empty field, jumping in triplicate into a pit of sand, lumbering endlessly around a plastic track with neither tasty kangaroo up front nor hungry crocodile behind to stimulate the pace? And what use would a communistic tribesman have had for a gold medal except to dangle it on his didgeridoo?

Such issues will be, of course, for society’s members – locally, globally, varyingly – to settle. Many will doubtless see sport purely as a means of healthy exercise and recreation whether strenuous and vigorous or painstaking and skilful; others may prefer to merely spectate or do nothing.

Some competitive elements and means of recording may well of course linger: football retaining its goalposts and referees, athletics its measuring tapes and stopwatches, judo its belt and points systems, but gone surely will be the all-pervading need to defeat, vanquish and rout: the tackle above the ball, the punch below the belt, the bouncer, the beamer and the hypodermic. Imagine: the Corinthian Spirit restored; amateurism regaining its true meaning and status within sport – and beyond. Imagine: world festivals replacing international competitions; sport for sport’s sake. Imagine too: divisive national flags recycled into cleaning mops; chauvinistic anthems supplanted by…Imagine.

And if some future Major Taylor is observed swooping around a velodrome with a posse of somewhat paler gentlemen in his wake, there will be no question whatsoever of bullwhip or hood: he’ll simply be pedalling a wee bit faster.