The Dictator. Directed by Larry Charles

“Nationalism of one kind or another was the cause of most of the genocide of the twentieth century. Flags are bits of colored cloth that governments use first to shrink-wrap people’s brains and then as ceremonial shrouds to bury the dead.” Arundhati Roy 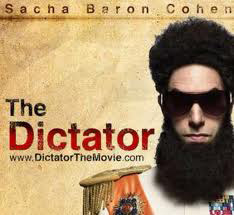 Sacha Baron-Cohen built his career on satirising superficial identity politics and testing the limits of tolerance of those identifying with groups who express offensive opinions. In an early appearance he defended the right to be lazy against a rattled Tony Benn’s fantasy of full employment.

Admiral General Aladeen is described as anti-imperialist and anti-Zionist. These are often the main claims made by real-world countries who find support from groups calling themselves socialist. Even in Britain, where most people do not get beyond the position of support for the country they are born in, some calling themselves ‘socialists’ get little further than ‘the enemy of my enemy is my friend’.

The Communist Party of Britain (Morning Star) has been known to use Marx and Lenin’s support for national liberation movements (a position which Rosa Luxemburg demolished), as the basis of their opposition to wars waged by some countries but not others.

Trotskyist opponents of war, such as the Socialist Party of England and Wales (SPEW), although more critical than Stalinists, are also selective, and support ‘the lesser of two evils’, depending on which countries are waging war. The Socialist Workers Party (SWP) claims to come from the unorthodox Trotskyist tradition and does not automatically or uncritically defend all so-called anti-imperialist countries. Smaller groups such as the Alliance for Workers Liberty claim a ‘Third-Camp’ position and have had a supporter who has been known to fly both an Israeli and Palestinian flag on a demonstration. So all represent a nationalism of sorts, but a nationalism nonetheless. The delusion is that powerful states can be condemned as imperialist but less powerful states murdering workers can be (critically or otherwise) supported as anti-imperialist. When this is couched in anti-interventionist terms, the socialist answer should be to intervene by promoting socialism everywhere, workers have no country.

At the end, even Aladeen’s final speech manages to distinguish between real democracy and a situation where both states are milked for oil by local dictators or by states with more powerful militaries. For this reason it is unlikely to be reviewed widely on the British left.

Where Baron-Cohen’s efforts to include romance and politics in his film fall flat, the more talented Chaplin succeeded in including both and was able to sum up his message of social freedom most eloquently – even better than most groups calling themselves socialist:

“You the people have the power, the power to create machines, the power to create happiness. You the people have the power to make this life free and beautiful, to make this life a wonderful adventure. Then in the name of democracy let us use that power – let us all unite. Let us fight for a new world, a decent world that will give men a chance to work, that will give youth a future and old age a security. By the promise of these things, brutes have risen to power, but they lie. They do not fulfil their promise, they never will. Dictators free themselves but they enslave the people. Now let us fight to fulfil that promise. Let us fight to free the world, to do away with national barriers, do away with greed, with hate and intolerance. Let us fight for a world of reason, a world where science and progress will lead to all men’s happiness.”